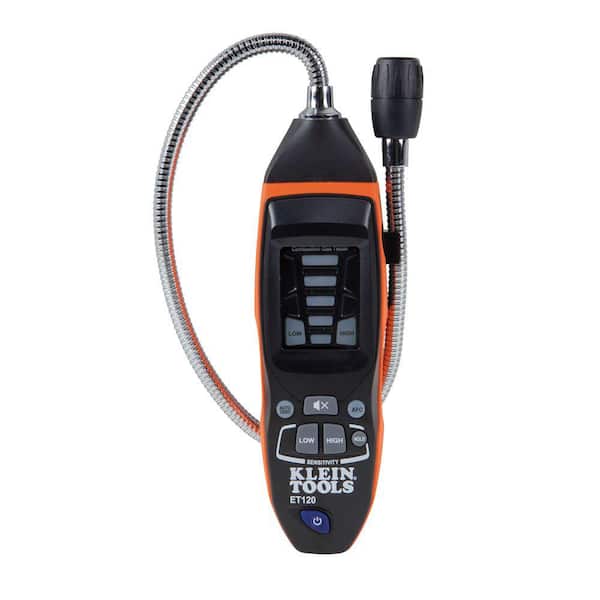 The ET120 is it the perfect choice for HVAC professionals. It is an easy-to-use tester that provides audible and visual alarms in the presence of methane, propane and other combustible gases at concentrations as low as 50 ppm. It features two levels of sensitivity depending on users' needs: High (approximately 50 to 1000 ppm) and Low (approximately 1,000 to 10,000 ppm).

3
Filter by:
Showing 1-10 of 79 reviews
Nov 13, 2017
A handheld, battery powered instrument for detecting the presence of methane, propane or butane, this device will easily fit into ones tool bag and, as it is rated for being dropped from 6.6 feet, should survive the rigors within, especially if kept in the supplied zippered pouch. Powered by four “AAA” cells (provided with the instrument), a five bar LED display (along with an audible alarm) indicates the proportional concentration of combustible gas detected. In the low sensitivity range it will detect from 1,000 td 10,000 parts per million (ppm) of combustible gas; in high sensitivity range from 50 to 1,000 ppm. The audible alarm can be muted if desired, if the sound is objectionable. A flexible eighteen inch “gooseneck” is provided to permit snaking the sensor head in and around obstructions. Before using, one initiates a zero calibration cycle (in an area known to be free of combustible gas)by depressing the power button for 3 seconds, which starts the device on a 50 second self-calibration cycle (see video). The sensor is rated for a 3 second response time and is claimed to have a lifetime of 5 to 7 years (the failure of which will be annunciated by ALL the indicator LEDs illuminating), at which time factory service is required. The device may be hand held or mounted to a tripod via the ¼-20UNC tripod mount. An auto-power off feature is provided, to conserve battery life, that will turn the instrument off after 10 seconds. One may turn this feature off if it will be necessary to keep the instrument operating in excess of 10 minutes. A “data hold” button is provided to retain the last measurement (for later recording). The four “AAA” batteries are contained in a removable cartridge, facilitating removal for replacement and/or when use is not anticipated for a while. Low battery condition is annunciated by both the high alert and low alert LEDs illuminating at the same time. Another positive to the battery “cartridge” is that, should one leave batteries in for an extended period, any corrosion should be limited to the cartridge rather than damaging the instrument internals. As shown in the video, the device quickly responded to the residual natural gas remaining after the valve for a stovetop burner was briefly opened and closed (without igniting the gas). Even with the ventilation fan running in the range hood, the instrument was sensitive enough to detect the residual gas. In summary, this instrument would be a great addition for HVAC techs, plumbers and appliance techs who want to verify that there are no leaking fittings, devices or piping.
by
1 found this review helpful
Nov 1, 2017
Five Stars for value, ease of use, and accurate measurements! To test this leak detector, I acces...
Five Stars for value, ease of use, and accurate measurements! To test this leak detector, I accessed a natural gas line that had been capped off. I removed the cap, turned on the gas for a quick second, then replaced the cap. The leak detector was turned on in accordance with the directions, then brought into the space with the gas line. It quickly sounded an alarm and flashed the lights. Even after turning on a fan to dissipate the small amount of gas released, this continued to detect gas, albeit at a reduced volume. I'll be using this for annual inspections of gas fittings in my home, and in the homes of family and friends. Highly recommended, especially since I once had small gas leaks in my house in the past!
by
3 found this review helpful
Jul 20, 2022
Klein gas detector
This device seems very well made. It is intuitively designed and reliably located a small gas leak in our house. Very pleased with product.
by
Jun 8, 2022
Klein has always been my go to for sensors! ...
Klein has always been my go to for sensors! Their quality, accuracy, and user-friendly applications are the best!
by
May 22, 2022
by
May 4, 2022
by
Apr 28, 2022
Easy to use. Works well....
Easy to use. Works well.
by
Apr 20, 2022
Nice tool, seems reliable
Works as described, easy to use, detected slight natural gas leak at connection
by
Apr 20, 2022
by
Apr 5, 2022
by
Showing 1-10 of 79 reviews