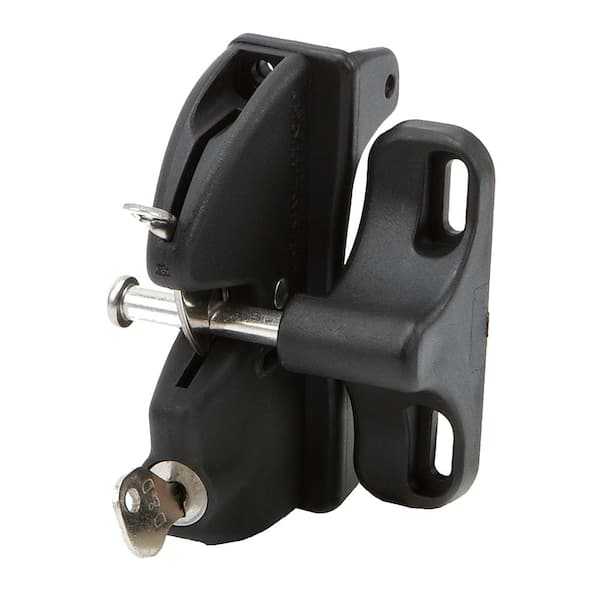 This Lokk Latch Two-Way Gate Latch serves as a quality, yet affordable, pedestrian gate latch for general-purpose gates around the home. It also offers a high degree of versatility, as it is adjustable both vertically and horizontally to ensure proper fit and reliable operation. This latch suits all square post gate and fencing materials as well as left or right hinged gates for easy installation.

2 Independent Latching Hooks Safetech's groundbreaking2 Independent Latching Hooks Safetech's groundbreaking Viper Latch is the most innovative pedestrian gate latch available. Switching sides for an installation has never been easier. Its patented back plate lets you shift from right hand to left hand operation in seconds with no screws required. Components can be lined up perfectly on wood, metal or vinyl gates because they can be moved horizontally and vertically, making last minute adjustments a snap. Saving you time and money. Pull-to-open action eliminates all external levers. Fail Safe Design. No openings that allow dirt, rain and other debris to invade the lock and damage performance. 2 independent latching hooks. Double the security, double your peace of mind. Limited Lifetime Warranty High grade polymer and stainless steel components contribute to a long service life that shrugs off slams and resists UV and rust degradation.See Full Product Description

The LokkLatch Deluxe is a high quality securityThe LokkLatch Deluxe is a high quality security and privacy gate latch for general-purpose gates. Special, longer side-fixing legs on this model provide extra strength and easy fitting alignment. The LokkLatch Deluxe with strong, molded polymer construction with stainless steel components, takes an innovative approach to the gravity latch principle and combines the unique benefits of key-lockability and reliable latching action with superior design and rust-proof components. The External Push-Button Access allows the gate to be opened and locked from either side of the fence. The LokkLatch Deluxe also offers a high degree of versatility, as it is adjustable both vertically and horizontally to ensure proper fit and reliable operation. This latch suits all square post gate (up to 6 in. / 150 mm) and fencing materials as well as left or right hinged gates for easy installation.See Full Product Description

The Safetech SL-25 Pool Gate Latch has aThe Safetech SL-25 Pool Gate Latch has a unique design that you can rely on to keep your pool area secured. The gate latch model has a magnetic, self-latching system that ensures the latch catches every time you close the pool gate. The waist-level lock featured on the pool gate latch is easy to open even if you have your hands full of towels, sunscreen or a cool drink to sip by the pool. You can latch the SL-25 swimming pool gate latch with or without the key, ensuring that you'll never have to leave your pool fence open, even if you've left the keys indoors. Manufactured from stainless steel and fiber-reinforced polymers, the Safetech SL-25 Pool Gate Latch offers superior strength to all other pool gate locks. The pool fence latch is E-coated, so that it is impervious to the effects of intense UV energy, rain and snow.See Full Product Description