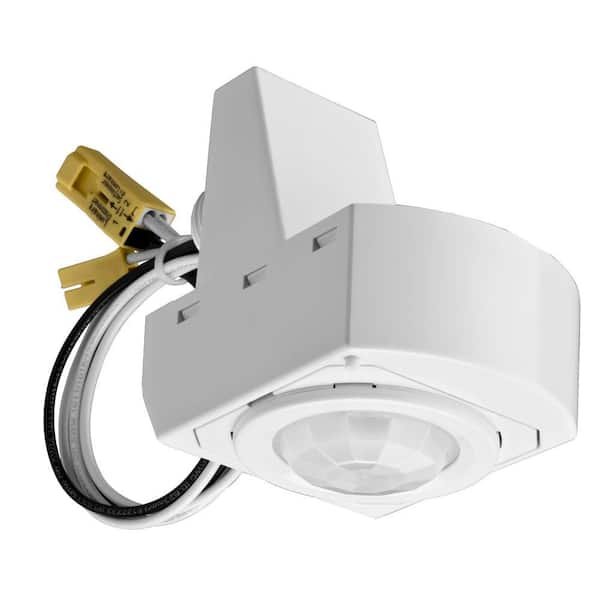 The 360° Fixture Mounted Motion Sensor from Lithonia Lighting is designed to save energy and money by automatically turning lights on when you need them and off when you don't. Perfect for operating single or multiple fixtures in commercial and residential locations. It is easy to install and wire to LED or fluorescent bay lights, strip lights and wraparound light fixtures.

Goes this sensor has a dusk to dawn feature?

No. Only motion sensor.

I've had this installed for many years. It worked flawlessly. However, recently it has been tur...

Mine has never ever worked right from Day 1!

Does it come with a schematic and/or a wiring diagram?

Yes, great detail, study it and everything works

Does anyone make a ceiling mounted motion detection light fixture to be used on a carport?

Yes, mount this on the end of any LED strip fixture and install it in your car port..

Does this motion sensor have a daylight sensor so it won't turn on in the daylight ?

this is a shop motion sensor. it only picks up motion in light or dark.

Will it sense small animals ?

It absolutely works with LED's. Mine is mounted 20 feet up in a well-sealed building without small animals so I am not sure about that. I think it all depends how high you mount it and how large or small the animals actually are. For example, I'd say that tat 12' it would react to a dog. A mouse, probably not?

If correctly wired, can this be ceiling mounted in the center of a room to control the recessed LED lighting?

You could make this work, but it is designed to be mounted into the end of light fixtures which are not recessed. If you mounted an electrical junction box, you can attach this to the box -- but if everything else electrical is recessed or otherwise flush-mounted/hidden, this is not a good fit.

Will this be sensitive enough to detect a cat I want to scare off? The neighbors cat is spraying ...

JJ, These will easily detect a small cat. Have 9 motion sensors mounted on 8' florescent (220v) lights at heights of 12' & 15' in the garage and our cat will set them off. Being able to set the duration of time they stay on is a bonus too. Going on 4 years with these and not a single problem. Have my doubts the light will scare off the cat.

7
Filter by:
Showing 1-10 of 85 reviews
Aug 5, 2020
Great motion sensor. Works perfectly. Can adjust time...
Great motion sensor. Works perfectly. Can adjust time remains on.
by MIKE
Dec 6, 2016
Was installed by licensed electrician and does NOT work. Electrician indicated that the wiring i...
Was installed by licensed electrician and does NOT work. Electrician indicated that the wiring instructions were reversed. Now I have to have it disconnected to see if I can return it.
by veronauser
2 people found this helpful
Jun 18, 2016
Detection range not what expected
I ordered 22 of these to use in a garage lighting retrofit project. Of the 22, three were bad out of the box. One would not power on al all; two others would power on but not control the attached light. Exchanged units worked fine. Fits well into a standard knockout. As others have said, wiring can be confusing and the printed documentation is useless if you're not installing in a fixture with connectors matching those of the sensor. I dislike the fact that of the 5 wires, 3 are solid and 2 are stranded. The stranded wire can be difficult to seat solidly when using push-in wire connectors. They operate as advertised, although when mounted at 8-foot height, the detection range is much less than I anticipated, not more than 10 feet in some cases (when properly using the provided low-bay lens, of course.) At that height, the sensors seem sensitive to being very level, as a slight tilt down can lower the range even more. Setting the operating interval is simple and reliable. These emit a very pronounced "click" when they activate; you wouldn't want to mount this in a quiet area where that would be annoying. Having to make 3 trips to a store to replace the bad units was irritating, and hopefully isn't indicative of poor life expectancy. LIthonia could do a better job with the packaging. Nearly every one of these found at local stores had seriously mangled boxes; a couple were missing the optional low-bay lens. Other than the somewhat disappointing range, these are doing the job of controlling our lighting based on occupancy. The price is among the lowest I've found (you can spend a lot more for a sensor) and in that respect they're a good deal.
by LACableGuy

16 people found this helpful
Dec 6, 2014
Works very well, found it very easy to install and program
I'll start by stating that I'm not an electrician or professional contractor. I bought two of these to control two 8' T5HO fixtures in the garage that tend to get left on all day. Pro: Not much to the installation-all parts are included for a standard installation. I found the instructions to be very easy to follow. Con: Top of the fixture is rather 'long' and couldn't be directly attached to my T5 fixtures (which are very small). I made a trip to the local HD and bought two pieces to adapt the sensor to the fixture. I removed the wires from the larger plug and fed the rest of it through the adapter and reattached the wires to the plug. Overall: I tested the first unit by putting my BBQ mitt over the sensor and waiting 15 minutes (the default setting). At 15 minutes and 3 seconds the light turned off. I'm leaving this part alone as 15 minutes is about where I wanted it to be in the end anyway. Installation of the first unit took 30 minutes while I worked out a way to install the sensor on the small T5HO fixture. The second unit (with the two additional pieces) took less than 10 minutes. I used a flat blade screwdriver, a pair of pliers (to remove the plug on the light fixture), and four larger wire nuts.
by Ataraxia

4 people found this helpful
May 13, 2014
Nice sensor
Easy to install. Direction weren't too complicated. I mounted mine right on the end of the first fixture. This way the subsequent fixtures on the circuit would all go on/off as well.
by Artagain

6 people found this helpful
Mar 23, 2014
IS NOT ADJUSTABLE!
Product not as described! I'm heading back to Home Depot for my third sensor! Cannot adjust the time! The sensor works great! I disconnected my garage door opener lights, when the sensor sees the door movement the lights come on. Would like to be able to lessen the on time.
by Dawg

Let Lutron's Maestro Occupancy Sensing SwitchLet Lutron's Maestro Occupancy Sensing Switch turn the lights on and off for you. This sensor is a simple way to save energy and add light automation to any room of your home, turning lights on when you enter the room and off when you exit. It features XCT sensing technology to detect fine motion, such as typing at a desk or reading a book, to ensure lights won’t turn off inadvertently. It also keeps lights off in natural light. You can install one sensor in the bathroom and one in the laundry room for added convenience and energy savings. This sensor works with any bulb type, including CFL and LED. It matches the entire Maestro's product family line (sold separately) to give you a complete and coordinated look in your home. Ground wire required.See Full Product Description

Lower electrical costs and add convenienceLower electrical costs and add convenience to everyday living by replacing standard switches with occupancy sensors. Leviton's IPS02 Occupancy Sensor Switch automatically turns the lights ON when you enter a room and OFF when you leave, convenient in rooms where you frequently enter and exit with your hands full. Ideal for use in laundry rooms, basements, storage areas, pantries and garages. Leviton occupancy sensors are a simple, cost effective way to automate a space in your home.See Full Product Description

Coordinating Claro Wall plate and AccessoriesCoordinating Claro Wall plate and Accessories sold separately. Let Lutron's Maestro Occupancy Sensor switch turn the lights or fan on and off for you. It's a simple, easy and low cost way to save energy and add automation to your home. Install a Maestro Sensor and lights/fan turn on when you enter the room and then turn off automatically after you leave. This sensor features XCT Sensing Technology which detects minor motion, such as typing at a desk or reading, ensuring sensor does not turn off inadvertently. Equipped with ambient light detection, you can customize your sensor to detect daylight so lights don't turn on with enough natural light in your room. Keeping the sleek design of the Maestro family, Lutron sensors will match the decor of any room in your home. Install a sensor in your bedroom so lights aren't left on mistakenly or in the bathroom for your exhaust fan. This Maestro Sensor works with any bulb type, including CFLs and LEDs or fans up to 3 Amp. This switch can also be easily programmed to function as a vacancy (manual-on) sensor.See Full Product Description

Let Lutron's Maestro Occupancy Sensing SwitchLet Lutron's Maestro Occupancy Sensing Switch turn the lights on and off for you. This sensor is a simple way to save energy and add light automation to any room of your home, turning lights on when you enter the room and off when you exit. It features XCT sensing technology to detect fine motion, such as typing at a desk or reading a book, to ensure lights won’t turn off inadvertently. It also keeps lights off in natural light. You can install one sensor in the bathroom and one in the laundry room for added convenience and energy savings. This sensor works with any bulb type, including CFL and LED. It matches the entire Maestro's product family line (sold separately) to give you a complete and coordinated look in your home. Ground wire required.See Full Product Description