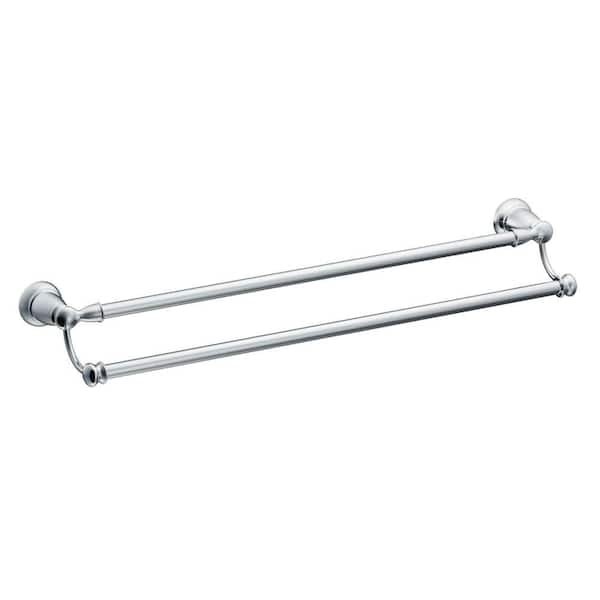 The Banbury Double Towel Bar highlights a timeless nostalgia for traditional versatility and sets a tone that is both classical and sensible. This two-tiered item adds an extra dimension of elegance to the bath. The front- to-back design creates depth and space for displaying complementary towel sets and multiple facets for showcasing its own design pattern.

Can the second bar (one furthest from the wall) be removed for single bar use?

Hello MB and thank you for your interest in Moen products. The second bar on the Banbury 24 in. Double Towel Bar in Chrome cannot be removed for use a single bar. A single 24” bar is available in the Banbury collection, the model number is Y2624CH. Should you have additional questions, please feel free to call us at 800-289-6636. We are available Monday through Friday from 9:00 am - 5:30 pm EST.

Is this available in the weatherford store?

Can the moen 30 in. Replacement bar rods be used instead of the 24 in to make it longer?

Because the rods slip into the holders on both sides, it is possible to use a longer rod if they sell replacement rods in a longer length.

What is the outside diameter of the rods?

Lost one of the set screws. What size are they?

TAKE ONE TO THE HARDEWARE STORE THEY GIV YOU A REPLACEMENT

How much space is between the two bars. I would like to use this for a blanket rack (not a big bl...

Probably not suitable for blankets. The space is actually kind of tight for larger bath towels. Also, the metal is so thin and ill fitting, that I think a blanket would be too heavy for this product.

Does this come in 12 inch size?

I cut mine down to fit my space

Can this product be modified by removing the hardware on the end in order to cut the length down?...

Yes, you could just trim the two towel bars down to whatever length you need.

What is the depth of this product, i.e., how far does it protrude from the wall?

From wall to outermost edge of bottom bar: 5.5 inches

12
Filter by:
Showing 1-10 of 399 reviews
Nov 17, 2020
Taking it back
This came in 4 pieces. You are supposed to inset the bars into the sides. The problem is that the bars don’t lock into place in the side pieces. There is a lot of “play” in the bars. It’s not sturdy.
by CarolinWashington
Response from MoenNov 21, 2020
Thank you SHarris so much for the feedback you posted on the Home Depot website. Moen takes consumer comments very seriously and we are delighted to have the opportunity to assist you. The Moen Brecklyn Single-Handle Pull-Out Sprayer Kitchen Faucet with Power Clean in Spot Resist Stainless includes a limited lifetime warranty with purchase. If the water supply lines from your home are not flushed during install, then the cartridge may need to be replaced sooner than expected. For warranty assistance, please contact Moen directly at 800-289-6636. Our business hours are 9:00 a.m. - 5:30 p.m. Monday through Friday Eastern Time.