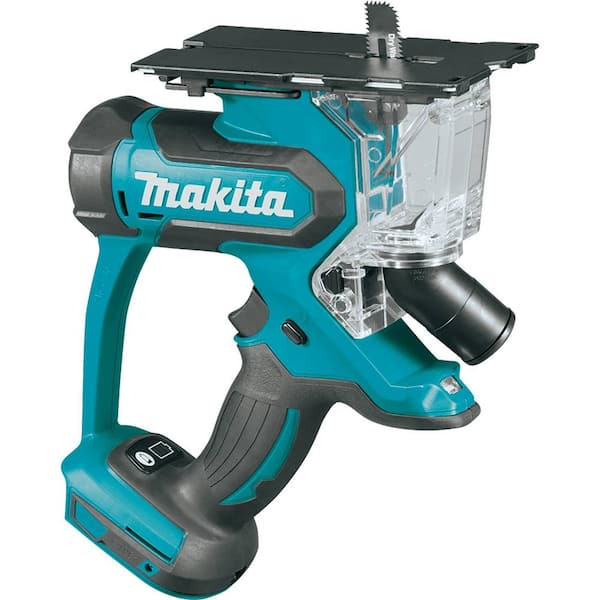 For straighter, more accurate cutting in vertical and overhead applications, Makita has a solution with the 18-Volt LXT Lithium-Ion Cordless Cut-Out Saw (model XDS01Z, tool only). It's designed to cut openings in installed board, including drywall and plywood and will cut up to 984 ft. of 1/2 in. drywall on a single charge using a 4.0Ah battery (sold separately). To help prevent damage to objects behind the board being cut, it has a short 1/4 in. stroke length with an adjustable blade depth up to 1-3/16 in. (9/16 in. in wood). For improved dust extraction, the XDS01Z has a dust port with a clear dust box for increased visibility. It is ideal for cut-outs and drywall repair applications. Makita 18-Volt Lithium-Ion batteries have the fastest charge times in their categories, so they spend more time working and less time sitting on the charger. For improved tool performance and extended battery life, Makita created Star Protection Computer Controls. Star Protection is communication technology that allows the Star Protection-equipped tool and battery to exchange data in real time and monitor conditions during use to protect against overloading, over-discharging and overheating. For increased versatility, the tool can also be powered by Makita 18-Volt LXT and Compact Lithium-Ion batteries with the star symbol on the battery indicating Star Protection inside.