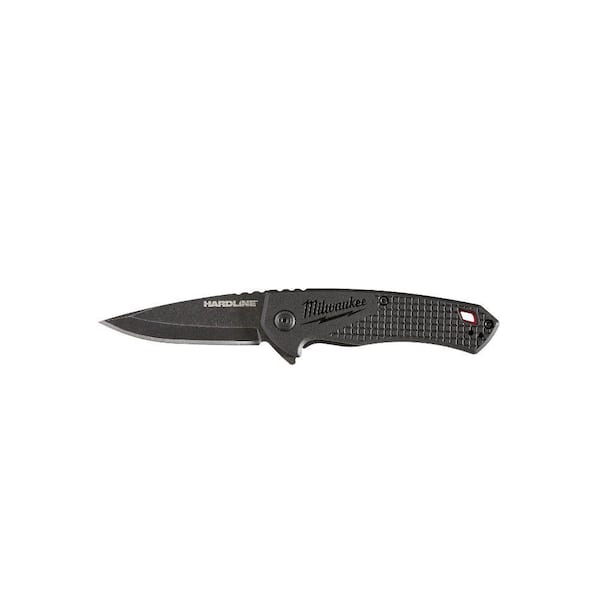 Use the right knife for the job when you have the Milwaukee Hardline 2-1/2 in. Smooth Blade Pocket Knife. Its D2 steel blade has superior wear resistance and the steel frame lock keeps it secure even in tough applications. A flipper with bearing system provides smooth, easy opening. This knife includes a reversible tip-up belt clip so you can carry it either right or left-handed.

8
Filter by:
Showing 1-30 of 118 reviews
Mar 21, 2021
Rugged Work Horse Ready For Anything!
Milwaukee Tool Co. make some awesome tools, I own many, I wasn't setting my expectations very high when I made this purchase simply because they don't build knives for a living. This HARDLINE knife is a good knife, I like the size, shape/style and the flipper action. I also like the general look, it has a no nonesense "get to business" style about it and it seems ready to tackle what ever task asked of it. I am impressed by the rugged sturdiness with which they built this knife, you can tell Milwaukee intended it to perform real work and do so on a daily basis. It seems very well made even if the build quality is only average. There are some minor fit/finish aspects which a knife collector would grumble over but then again if you're a collector you're not likely buying this knife. The knife came well ground, even and smooth but not all that sharp. It isn't dull either but another knife I recently purchased with the same D2 steel is WAY sharper out of the box, so I know it can be made much sharper, and I will put it to my diamond sharpener shortly to remedy this. Another thing I wasn't particularly happy with is the difficulty I seem to have sliding the liner lock over to close it. On one hand its nice that it is very robust and well contoured but it has no jimping to gave you a decent grip. It's actually nice to see a frame lock as thick and substantial as the blade itself, it made me wonder how some other knives with rather thin flimsy liner locks would actually hold up. I hope through daily carry I will get more accustomed to it, but right now, it's just a bit frustrating with my extra large hands. The blade is well centered when closed, opens quickly with the flicker tab and the bearing is smooth in motion. When I use this knife I think "rough and ready" and I think that description suits this knife well. The pocket clip is reversable but is not a "deep" carry style and I believe that is intentional. You want to be able to grab this knife out of your pocket easily even when wearing work gloves and you can do just that. Plus it's made in the USA! That counts for a lot.
by

FASTBACK 5-in-1 Folding Knife with 3 in. Blade

The MILWAUKEE FASTBACK 5-in-1 Folding KnifeThe MILWAUKEE FASTBACK 5-in-1 Folding Knife features a press and flip mechanism providing users easy, one-handed opening. The folding knife has a stainless steel blade that stays sharp. The pocket knife also features a liner lock that secures the blade while also allowing users to easily close it when done. The 5-in-1 pocket knife has a folding tanto knife that is partially serrated for versatility, enabling users to both pierce and tear through material. The folding pocket knife also includes a fold-out 1/4" bit holder along with a reversible Phillips #2 and slotted 1/4" bit. It also has a built-in bottle opener delivering users added functionality. The pocket knife has a durable belt clip that reduces pocket tearing and includes a tether-ready lanyard hole.See Full Product Description

Built for durability is this Milwaukee HardlineBuilt for durability is this Milwaukee Hardline 2-1/2 in. Smooth Blade Pocket Knife. It features a steel frame lock that provides a strong secure lock for tough applications. This knife has a D2 steel blade that delivers extreme wear resistance and a flipper with bearing system that allows fast, smooth opening. It has a stone washed black oxide finish with a reversible tip-up belt clip that allows you to carry it whether right or left-handed. Milwaukee 6 in 1 Combination Pliers feature a revolutionary, forged dual head design for wire stripping and needle nose functionality. A unique reaming design is integrated into the pliers head for smoothing out rough edges of metal pipe, and a curved blade design allows for clean cuts through larger wire sizes.See Full Product Description

Use the right knife for the job when youUse the right knife for the job when you have the Milwaukee Hardline 2-1/2 in. Smooth Blade Pocket Knife. Its D2 steel blade has superior wear resistance and the steel frame lock keeps it secure even in tough applications. A flipper with bearing system provides smooth, easy opening. This knife includes a reversible tip-up belt clip so you can carry it either right or left-handed. The Milwaukee 7-in-1 High-Leverage Combination Pliers feature 7 core functions for electrical installation. These Milwaukee pliers feature a crimper, wire cutter, wire stripper, loop maker, reamer, and bolt cutter. The wide jaw pliers make grabbing and twisting wire easy, while the crimper provides users with added functionality when working with both insulated and non-insulated terminals. The wire cutter, wire stripper, and loop maker allow users to make quick wire preparation. The built-in reamer allows users to ream ½ in. through 1 in. conduit, while the bolt cutter cuts #6 and #8 bolts. A swing-lock design delivers fast, 1-handed operation, and the high-leverage handles make cutting and crimping easier. The 7-in-1 electrical pliers provide maximum productivity and are perfect for the toughest jobsites.See Full Product Description

Use the right knife for the job when youUse the right knife for the job when you have the Milwaukee Hardline 2-1/2 in. Smooth Blade Pocket Knife. Its D2 steel blade has superior wear resistance and the steel frame lock keeps it secure even in tough applications. A flipper with bearing system provides smooth, easy opening. This knife includes a reversible tip-up belt clip so you can carry it either right or left-handed. The Milwaukee 25 ft. STUD Tape Measures are the industry's most durable tape measure, equipped with innovative EXO360 Blade Technology. EXO360 protects the user's tape's blade from ripping and wearing, delivering the longest-lasting blade on the market. The tape delivers 17 ft. of reach allowing users to take long measurements on your their and reach further on the jobsite. Cutting-edge measuring tape blade technology, combined with a fully-reinforced impact-resistant frame makes STUD Tape Measures the most durable retractable tape measure for all of a user's jobsite needs. STUD measuring tapes also features double-sided printing for easy reading as well as a finger stop to control blade retraction.See Full Product Description