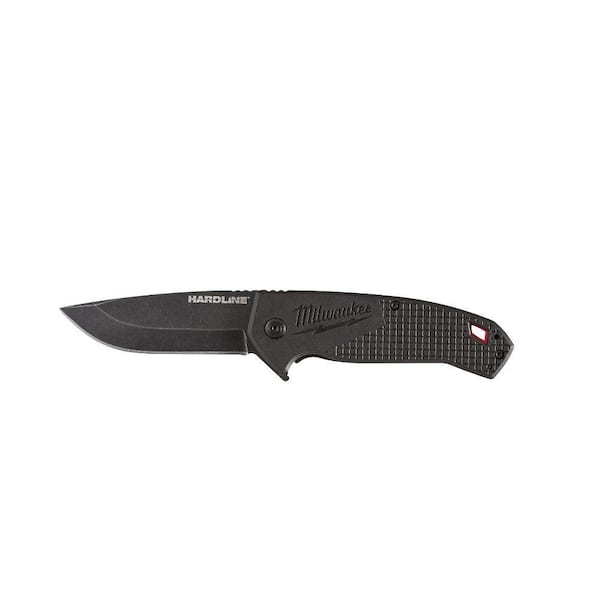 Hello Ron! We suggest visiting your nearest authorized service center. They can assist with your retaining screw. You can find your nearest center here - http://bit.ly/2rn6crF. Otherwise, you can always give us a call at 1-800-SAWDUST from 8:00am to 6:00pm CT, Monday-Friday.

Where are these knives manufactured?

Milwaukee knives are made in China.

Will the Hardline series of knives be sold in-stores?

Yep, they are in stores now.

2
Filter by:
Showing 1-10 of 59 reviews
Aug 6, 2020
I received this knife on July 13, 2020, and I’ve...
I received this knife on July 13, 2020, and I’ve EDC’d it ever since. In these past 3 weeks, I‘ve fallen in love with it! I have knives in S30V, VG-10, AUS-8, his is my first knife in D2, and it is a performer! I’ve wanted a Hardline knife ever since they came out, and the wait has been worthwhile! There is a break in period before the action becomes quite smooth, so keep that in mind.
by Keith
1 person found this helpful
Feb 18, 2020
Solid product. Compatible to EDC.
Solid product. Compatible to EDC.
by ArimasIndustries
Sep 25, 2018
Excellent product, holds edge fine and feels durable in hand. Would definitely recommend this pro...
Excellent product, holds edge fine and feels durable in hand. Would definitely recommend this product
by Josh
Sep 4, 2016
Really Holds An Edge!
This Hardline series of knives is Milwaukee's debut in the EDC knife market, and I think they've hit it out of the park in quality, ergonomics, and price point. I started out with the 2.5" blade version, and liked it so much I picked up this 3" drop point version as well. The 3" version fits a little better in my hand, but I prefer the "pointier" drop point of the 2.5" for piercing over the more curved 3" blade. First, let's talk about the blade. All the Hardline knives use D2 steel, which is a high chromium, high carbon tool steel. It's corrosion resistant, very hard, and has a great ability to hold an edge. Downsides is that it's a little more brittle than other knife steels, and it can be harder to sharpen, although it doesn't need sharpening as often as other softer steels. I did some comparisons with other brands, and was very hard pressed to find any knives with D2 steel under $100. In fact, the only ones I did find under $100 were all liner locks, and not a frame lock like the Hardline series uses. I found that this 3" version wasn't quite as sharp as the 2.5" version I already had. The 3" one wasn't sharp enough to shave with right out of the packaging. After about 20 minutes of careful sharpening with a ceramic, I had it as sharp or sharper than the 2.5" blade originally was though. So it's not terribly difficult to sharpen, it just takes some time. I've been carrying and using the knife for the past three weeks, and after my initial sharpening of the blade, it's still sharp enough to shave with. I've used it to cut paper, cardboard, twine, blister packaging, etc., and it's holding and edge very well. The flipper design opens the knife with a crisp snap, and the ball detent keeps the knife closed in your pocket, with nearly no chance of it coming open accidentally. The belt clip is reversible for right or left handed users, but it's only configurable for tip-up carry. This is most convenient for deploying and using the knife quickly, but some may have concerns about the knife coming open in a pocket and getting poked or sliced when reaching into the pocket. I don't see this as a big issue, since the ball detent is very effective at keeping the knife closed. The frame lock has good coverage on the blade, but can be a bit tricky to get disengaged without some practice. The edge you push on with your thumb to disengage the lock is a bit rounded over, and could use some texture to help grip. After a bit of practice, I don't have any problems disengaging the lock one-handed with my right hand, but it's very difficult for me to disengage the lock one-handed with my left hand - I always have to resort to pushing the back edge against a hard surface to assist in closing the blade. It could be I'm not as coordinated as a lefty would be, but it's also a different motion and less natural using the left hand. The 3" bladed version of the Hardline knives is just a little too big for putting in a watch pocket on my jeans, but then again I have a smaller frame, and someone who is 5'8"+ may have more real estate in their pockets. The belt clip still holds it securely to a pocket edge, and I usually just end up carrying it in the corner of my back pocket. So in summary, this is a great EDC knife - it's a little more on the high end of the "economical" range, but I don't think you'll find anything better unless you look in the over $100 range.
by Doresoom

9 people found this helpful
Aug 30, 2016
My Favorite of the Hardline Knives
I'm a bit of a knife collector and I have all 4 of the Hardline knives. I like them all but this one is my favorite. The 3" size is perfect for me. I do really like the tanto serrated 3" hardline also, but for most of my needs a smooth blade is best. - D2 Steel for under 100.00. Very hard to find in a 3" pocket knife of this build quality - Really heavy duty. This knife is beefy. Stainless steel (stonwashed finish) back, glass reinforced nylon grip, and a serious frame lock. This is made for some serious use. It's also fairly heavy for it's size, but not unreasonably so. - Tip up carry that is really deep. The knife is barely visible in pocket. The clip is reversible for lefties like me - Comes razor sharp out of the package - Opens very quickly with the flipper on the back. No flick of the wrist needed. It's one of the smoothest and fastest (non-spring assisted) knives I own. The only downside for me is closing. I mentioned this in my reviews for the other 3 knives as well. I cannot close this knife with just my left hand. I either need to use my right hand, or use 2 hands to close it. The frame lock is very secure. Overall this is my favorite of all the hardline knives, and one of my top three 3" folding knives I currently own. As you can see in the pictures of the blade, I've already put this knife through some heavy use. I will be carrying this one with me everywhere for the foreseeable future.
by joelav22

6 people found this helpful
Aug 26, 2016
Good size and weight for an every day carry knife with solid build
I got this and the 2.5 inch version of it to give a try and see which of them (if either) I would prefer as something to carry routinely. I fully expected to prefer the smaller one but after going back and forth truing them both I keep going back to this one as my preference. It's noticeably easier to open and close than the smaller version without being that much heavier. It's not as light as the old bucklite I had been carrying lately but it is plenty light enough to be comfortable. I don't usually use belt clips but this one has just the right amount of grip being easy to slide on and off without being too loose or too tight. So I'm a belt clip convert on this one. The only thing I would change is the addition of a nail mark for opening but that's just me. The flipper is fine once you get used to it. It's still plenty easy to open and close. The build quality is good and solid and the ball bearing makes it smooth. Yeah, it's more expensive than some knives but it is a good quality. I think it stacks up reasonably well against some more expensive knives. I think I'll be carrying this one for a good while.
by decman

Aug 26, 2016
NICE RUGGED EVERY DAY CARRY KNIFE
I am slightly impressed with the quality of the Hardline smooth blade pocket knife by Milwaukee. The stone washed black oxide finish looks nice and helps prevent corrosion. Even after cutting thick plastic straps, removing splits in furring strips and prying out staples, etc. the blade shows no wear marks The knife . The D2 steel blade is thick and rugged looking but should come from factory sharper. The flipper and bearing system aides in opening knife but flipper could be a little more angled or a tad bigger but once you get use to it the knife is pretty easy to open. The blade locks open via a strong steel frame lock that is a little hard to release especially the first few times you use the knife. The front side of the knife has a glass filled nylon handle that gives you a nice slip resistant grip while the back side of handle is smooth stanless steel with the same stone washed finish. In my opinion there are two design flaws in this knife. Both sides of the knife handle should have been made out of the glass filled nylon and frame lock should be better designed. The D2 steel blade is why I gave this product four stars instead of three.
by PEANUT

2 people found this helpful
Aug 16, 2016
Awesome Pocket Knife!!
This is a very solid & durable feeling pocket knife. Perfect for both the jobsite and everyday carry applications. The flipper mechanism is very quick and smooth for fast opening. The locking mechanism is very solid & offers confidence the blade is locked with no concerns of opening up. Nice deep carry pocket clip. Extremely sharp blade. Gripping the knife for any cutting applications is very natural feeling and comfortable. I would definitely recommend to anyone in the market for a new pocket knife!!
by HomeDepotCustomer

Use the right knife for the job when youUse the right knife for the job when you have the Milwaukee Hardline 3 in. Serrated Blade Pocket Knife. Its D2 steel blade has superior wear resistance and the steel frame lock keeps it secure even in tough applications. A flipper with bearing system provides smooth, easy opening. This knife has a serrated tanto blade and includes a reversible tip-up belt clip so you can carry it either right- or left-handed.See Full Product Description

Built for durability is this Milwaukee HardlineBuilt for durability is this Milwaukee Hardline 2-1/2 in. Smooth Blade Pocket Knife. It features a steel frame lock that provides a strong secure lock for tough applications. This knife has a D2 steel blade that delivers extreme wear resistance and a flipper with bearing system that allows fast, smooth opening. It has a stone washed black oxide finish with a reversible tip-up belt clip that allows you to carry it whether right or left-handed. Milwaukee 6 in 1 Combination Pliers feature a revolutionary, forged dual head design for wire stripping and needle nose functionality. A unique reaming design is integrated into the pliers head for smoothing out rough edges of metal pipe, and a curved blade design allows for clean cuts through larger wire sizes.See Full Product Description

Use the right knife for the job when youUse the right knife for the job when you have the Milwaukee Hardline 3.5 in. Smooth Blade Pocket Knife. Its D2 steel blade has superior wear resistance and the steel frame lock keeps it secure even in tough applications. A flipper with bearing system provides smooth, easy opening. This recurve drop point blade knife includes a reversible tip-up belt clip so you can carry it either right- or left-handed.See Full Product Description