FASTBACK 5- in-1 Folding Knife with 3 in. Blade 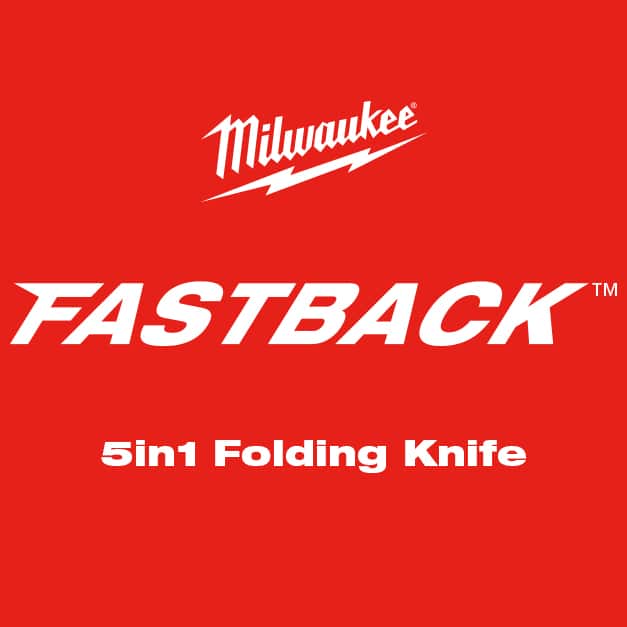 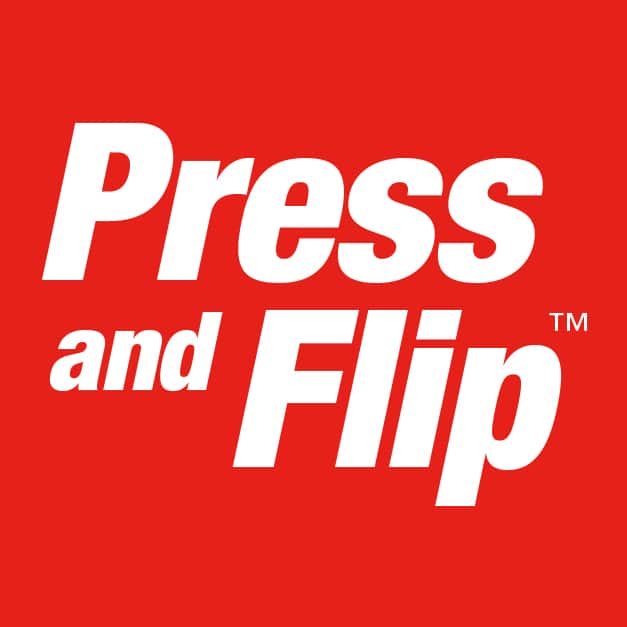 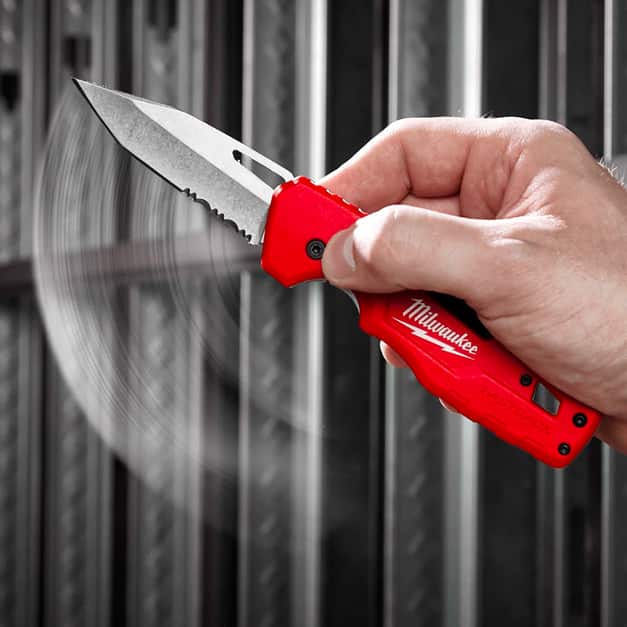 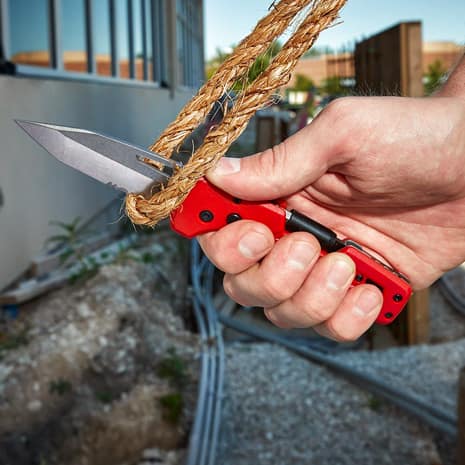 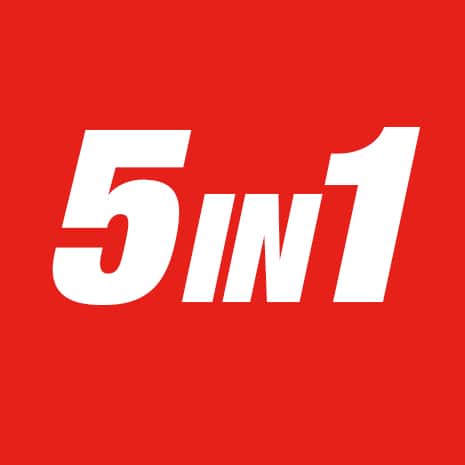 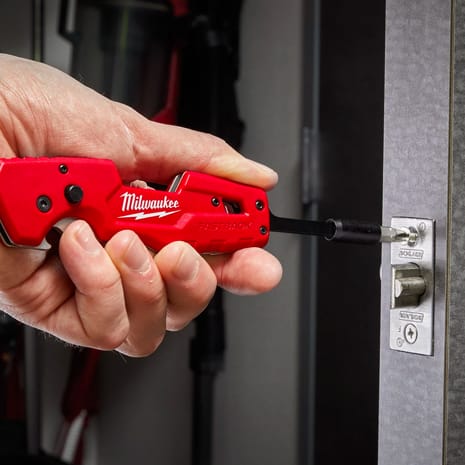 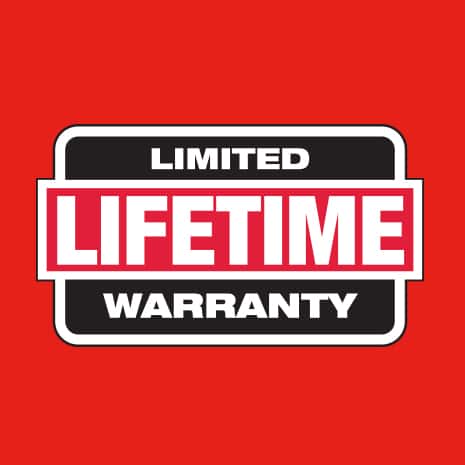 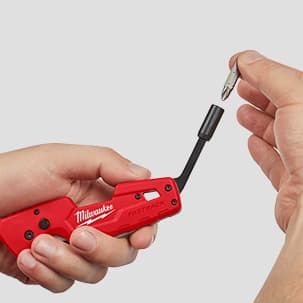 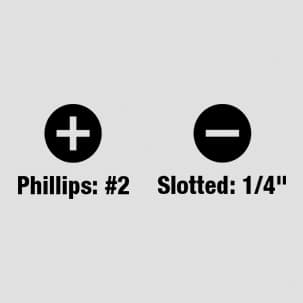 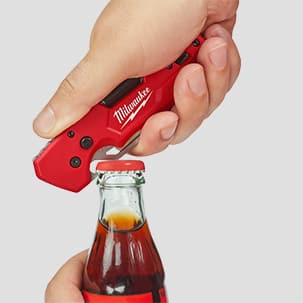 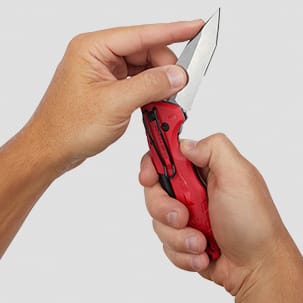 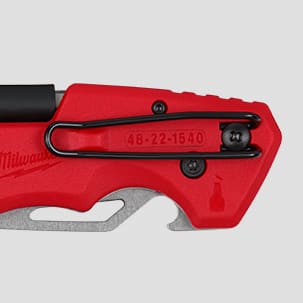 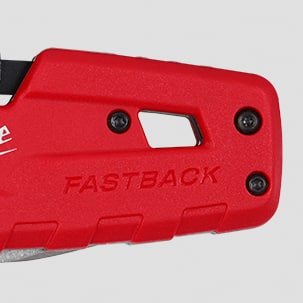 Shop All of the Milwaukee Utility Knives

The MILWAUKEE FASTBACK 5-in-1 Folding Knife features a press and flip mechanism providing users easy, one-handed opening. The folding knife has a stainless steel blade that stays sharp. The pocket knife also features a liner lock that secures the blade while also allowing users to easily close it when done. The 5-in-1 pocket knife has a folding tanto knife that is partially serrated for versatility, enabling users to both pierce and tear through material. The folding pocket knife also includes a fold-out 1/4" bit holder along with a reversible Phillips #2 and slotted 1/4" bit. It also has a built-in bottle opener delivering users added functionality. The pocket knife has a durable belt clip that reduces pocket tearing and includes a tether-ready lanyard hole.

A:  All I can say is that it’s carbon steel, (not stainless). Hopefully it’s higher quality tool steel. As with any tools, if you take care of it it will last. Definitely worth the price.

Q:Why is this unavailable in NY?!? What could possibly be any more or less “weaponized” with this t...
by|Mar 23, 2021
4 Answers
Answer This Question

A:  Spring loaded knives are illegal in NYS

A:  The best answer is New Yorks concealed weapon law. A knife is not defined as a tool, a folding knife can be defined as a weapon by a peace officer. A three inch blade frequently is at the upper limit for a utility tool.

A:  I think the knife is an online offer only right now

A:  Not sure why it isn’t can you order it on HD’s website and have it delivered to you

A:  It’s manufactured as though it is. But if you damage it while it’s under warranty you may be able to ship it back to Milwaukee for repair or replacement. I’d contact them.

A:  I'm sure it is. There are 2 screws holding it together along with a spring. No problem to change.

A:  It doesn’t appear that it is replaceable

Q:On the clip side of knife theres a cut-out with what looks like a lock icon. Whats it for?
by|Feb 5, 2021
5 Answers
Answer This Question

A:  That would have been pretty sweet if it were a wire stripper... but its to flip the clip as mentioned... it is so you can have the blade facing up or down when clipped in your pocket so when you pull it out, you can flip it immediately versus having to rotate it to quick flip.

A:  I believe what you're referring to is the symbol just beneath the pocket clip screw down. If so it's a symbol of a person's head wearing safety glasses. So wear safety glasses when using the knife The lighting bolt is to warn that you can't use on live circuits or for electrical. The 3rd symbol is an open bottle.

A:  I believe it’s a wire stripper. Notice how the tip of the blade is showing inside the hole?

A:  It allows to flip the clip in that spot.

A:  To flip the clip to that side of the knife

16
Filter by:
Showing 1-10 of 428 reviews
Dec 14, 2022
Great quality
Sharp out of the packaging and very useful.
by
Nov 29, 2022
Broken screwdriver function
I was excited to give these a shot and loved the idea of it being an easy carry multi tool of sorts. Unfortunately the screwdriver part did not hold up long. About 5 months of a daily carry with normal use. The section where the bit goes in is a two piece design which left a fatale flaw as you can see in the pictures attached. If this was redesigned as a one piece it would increase it's strength a lot.
by
Aug 8, 2022
Keeping the bit
I have several different Milwaukee knives and all have been sharp. Some reviews for this knife listed that they lost the OEM bit. I am including a photo of how I keep my bit in. You have to have the flat blade out and set so it is 90 degrees to the knife side.
by
Apr 11, 2022
Awesome work knife
Great work knife, wish it would hold it’s edge a little longer though.. keep having to sharpen it every other day
by
Oct 14, 2021
Solid Everyday Necessity!
I have used this took daily for over a year now in the field and the shop. Knife is very sharp and sturdy. The bit driver is such a handy tool. My only complaint is after a year of daily use I finally lost the bit. I cannot find a replacement that fits in there as well as the original. I don’t see a Milwaukee replacement part. Other than that you will love this tool!
by

The Husky Sporting Knife is ideal for manyThe Husky Sporting Knife is ideal for many uses. The 7Cr17 Stainless-Steel blade will power through the toughest cutting jobs with ease and is easy to sharpen while still holding a great cutting edge. Thumb studs on both sides of the blade make 1-handed opening easy; right or left handed.View Full Product Description

Basic cutting jobs are no match for the MilwaukeeBasic cutting jobs are no match for the Milwaukee Lockback Pocket Knife. A stainless steel blade provides a sharp, resilient edge, while the lockback design securely holds the blade open for heavy use. This durable knife also features a nail nick on the blade and an ergonomic handle for a firm, comfortable grip. The reversible wire-form belt clip gives you multiple carry options, either or a belt or in a pocket. An integrated lanyard hole makes for easy tethering.View Full Product Description

The Milwaukee FASTBACK 5-in-1 Folding KnifeThe Milwaukee FASTBACK 5-in-1 Folding Knife features a press and flip mechanism providing users easy, 1-handed opening. The folding knife has a stainless steel blade that stays sharp. The pocket knife also features a liner lock that secures the blade while also allowing users to easily close it when done. The 5-in-1 pocket knife has a folding tanto knife that is partially serrated for versatility, enabling users to both pierce and tear through material. The folding pocket knife also includes a fold-out 1/4 in. bit holder along with a reversible Phillips #2 and slotted 1/4 in. bit. It also has a built-in bottle opener delivering users added functionality. The pocket knife has a durable belt clip that reduces pocket tearing and includes a tether-ready lanyard hole. Milwaukee 6-in-1 Combination Pliers feature a revolutionary, forged dual head design for wire stripping and needle nose functionality. A unique reaming design is integrated into the pliers head for smoothing out rough edges of metal pipe and a curved blade design allows for clean cuts through larger wire sizes. These pliers have the capability to cut #6 and #8 bolts and feature a swing-lock design for fast 1-handed operation and won't open when stored in a pouch or backpack. Milwaukee 6-in-1 Combination Pliers deliver maximum productivity for the trades. The Milwaukee 48-22-3079 is perfect for the toughest of jobsites. Kit Includes: one 5-in-1 Knife and one 6-in-1 Pliers.View Full Product Description