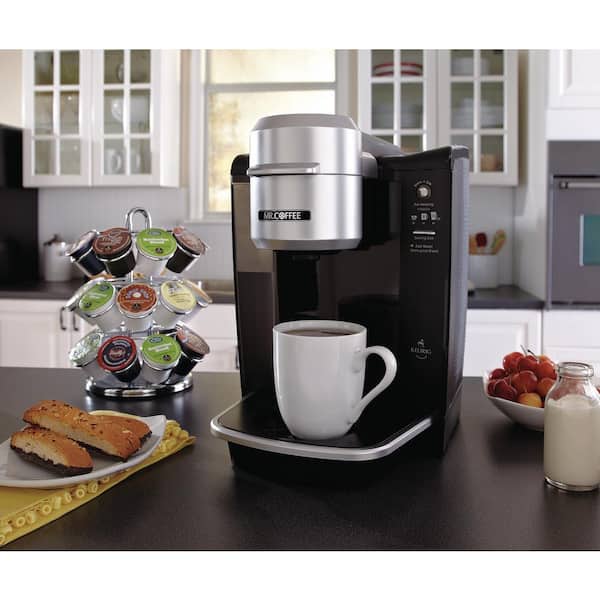 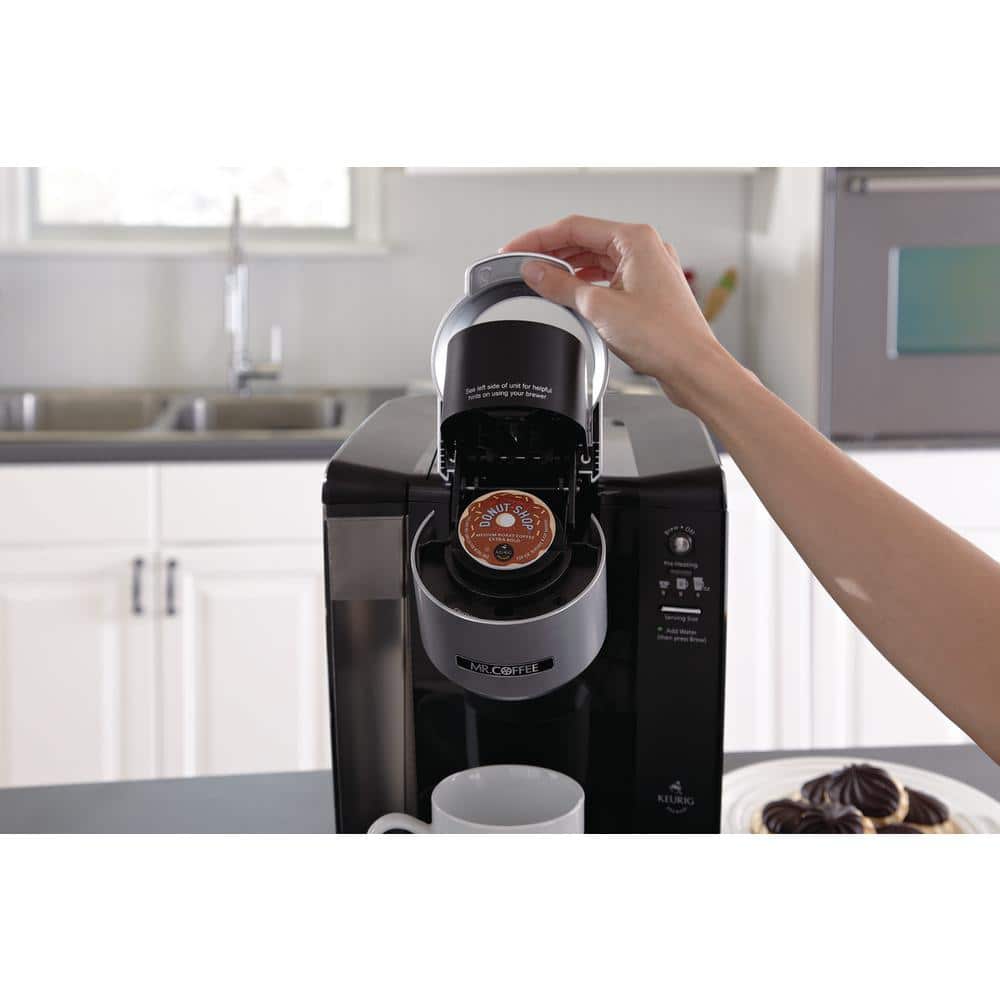 Through its partnership with Keurig, the Mr. Coffee brand provides genuine Keurig Brewed technology at a Mr. Coffee brand value. With this Mr. Coffee Single Cup K-Cup Brewing System, you simply add fresh water into reservoir, insert desired K-Cup pack and press the brew button. Fresh, hot coffee brews right into your cup or mug in under 1 minute and there's no mess left to clean. Choose from a variety of over 250 K-Cup Packs from coffee or tea to hot cocoa and more. Removable drip tray accommodates larger cups and travel mugs. Includes five K-Cup sample pack. Brew time based on brewing a 6 or 8 ounce cup of coffee.

The KG6 Single Serve takes the K cups. It is not designed for the pods that covers the coffee and tea with filter paper. The K cups can either be the Keurig brand K-cups or other cups that are the same size. Hope this helps!

What size is the footptint? What is wattage?

This single serve is rated at 1000 watts and the overall measurements of the KG6 single serve are: Height- 12.5 inches Width- 9 inches Length- 11.5 inches Have a great day!

Can you use refillable cups with this coffee maker? The cups are so wasteful and full of chemical...

Yes. You can use any Keurig type refillable cup.

47
Filter by:
Showing 1-10 of 202 reviews
Mar 6, 2017
For the love of K-cup!
I love the convenience of the K cups especially when I am running late for the office (which is everyday). I decided to give this product a try since this handles the older generation of Keurig cups and I can swap with a reusable K-cup, in case I need to. I really liked the detachable water tank which can be easily filled under the tap. The volume is good enough for a working week, without the need to refill for a single person. There are three brew sizes which you can choose according to your preference. The drip tray is detachable for filling the travel mugs directly. The brew quality is similar to the Keurig brewer I have used earlier and I can hardly make a difference. This however is a little slow compared to Keurig in between the brew cycles. Overall, pleased with the purchase and would recommend this if you are looking for a Keurig alternative that handles the K-cups.
by Victor

2 people found this helpful
Feb 20, 2017
Dual Personality
Though this coffee maker is sold under the Mr. Coffee brand, it is actually a combined effort of Mr. Coffee and Keurig with the more prominently, larger Keurig name printed above the other on its front so there's no mistaking that there is Keurig technology inside. We have a Keurig model K45 (discontinued & now replaced as K55) which is very similar to this Mr. Coffee model in size, features, performance and price. Making a cup of coffee is quick and fairly simple. Once you turn it on, you then press the size selector choosing from 6, 8 or 10 ounces. Wait about a minute for the power button to glow orange indicating that the water is heated and it's ready to brew, then open the pod compartment and insert your coffee pod. Close it and press the power button to begin your brew. The process is similar to running our Keurig K45. Though they have slightly different controls, both operate in about the same length of time making a perfect cup of coffee and have similar recovery intervals for the next cup. If you like coffee from Keurig makers, then you will like this Mr. Coffee. A couple of tips: 1) Instead of removing the reservoir to fill it, leave it on the coffee maker and pour water from a pitcher. It'll hold enough extra that way to fill an additional cup. 2) For milder coffee drinkers, to get a larger cup, just buy the stronger Dark varieties and run two cycles through the pod (opening the pod compartment between cycles.) The Darker varieties just hold more coffee in them.
by Pappy

1 person found this helpful
Feb 18, 2017
Coffee Anytime You Want It.
I am so happy that Mr. Coffee makes a single server brewer to be used with the Keurig K cups. I have been looking for a nice brewer that will easily fit on my desk at work without taking up a lot of space. I have found one that fits perfectly. An added bonus is that it is very quiet when it is heating up and brewing coffee. This is good in a office environment. There are settings for three sizes and a drip pan that will hold an entire cup of coffee if needed without spilling over. I can remove the drip pan and brew right into a large travel mug or sit my favorite mug on the drip pan and have coffee ready to go.
by

3 people found this helpful
Feb 17, 2017
Mr Coffee K-cup
Mr Coffee is known for it's quality and affordability. Now Mr Coffee has a K-cup coffee maker at an affordable price. It is a single serving but has a water reservoir for 40 ounces which allow you to make multiple cups without having to add water after each use. Classic silver and black construction adds a touch of elegance in your kitchen. Versatility in your choice of cup size. You can chose from 6, 8, or 10 ounce servings. If you like a stronger cup of coffee use a bolder coffee and smaller serving size.
by Debbie

3 people found this helpful
Feb 16, 2017
A CUP OF HOT COFFEE IN NO TIME
This coffee maker comes with four components in the box -- the machine itself, the water tank, the platform the cup sits on, and some complimentary coffee pods to get started! There's no real assembly involved other than to place the cup platform on the base of the machine, fill the tank with water and slide it on to the side of the machine, and put in a coffee pod. I like that instead of having to fill the water tank while it is attached to the machine, you can lift it up and out, fill it and place it back as it latches onto the side of the coffee machine. The water heats up remarkably fast! The cup platform will catch any overflow and can be emptied, but I would have liked the platform to attach to the bottom of the machine a bit more securely as it pushes off sideways when you move the cup. There are three serving sizes to choose from - 6 ounce (a small teacup), 8 ounce (a small mug), and 10 ounce (a large mug) - at the touch of a push button. The instructions recommend running a cycle of just hot water without a coffee pod when the machine is new and first used, which I did. One nice feature is that you can set the machine to automatically turn off after two hours of non-use by pressing the Brew/Off button and the Serving Size button simultaneously for 5 seconds. You can reverse that so the machine stays on indefinitely using the same method. That said, I would have liked a true On/Off switch as I only drink one cup of coffee each day and the machine really doesn't need to stay on for two hours before turning itself off! But the only way to turn it off inside two hours is to pull the plug from the wall. Because this machine heats up the water and brews one cup of coffee so fast, I think it will even work well when serving coffee to guests as it would take no time at all to make several cups of coffee.
by AussieLady

1 person found this helpful
Jan 27, 2017
BEST CHRISTMAS PRESENT EVER!!!
I received my Mr. Coffee as a Christmas present! I can't rave enough about how much I love it. It's been a month now and I can't stop talking about it to my friends. So user friendly even my kiddos have me coffee ready in the morning! Thanks for making such a wonderful machine!
by Tommy9

Customer review from mrcoffee.com
Feb 25, 2018
2nd one not working
[This review was collected as part of a promotion.] The present BVMC-KG6 model replaced another that stopped working. Now this one is leaking water from under the unit.
by Ms Smith
Response from Customer ServiceFeb 26, 2018
I'm sorry for any trouble you've had with your single serve brewers. We value your feedback and have documented your concerns. Please call us at (800) 672-6333 so that we can directly assist you. You can reach us between the hours of 9AM-6PM EST Monday-Saturday. A Mr. Coffee product specialist will be happy to investigate your available options.

Customer review from mrcoffee.com
Sep 21, 2017
Not very well made is not worth the money
It's only worked for 2 day waste of money not worth the space in the kitchen
by Brit69
Response from Customer ServiceOct 11, 2017
We have high expectations for our products here at Mr. Coffee, and would like the opportunity to change your experience with your coffee maker. Please contact our Customer Care Team at 1-800-672-6333, so that we can resolve this issue for you. You can also contact us via live chat on our site. We look forward to assisting you, and are available Monday-Saturday, 9am-6pm Eastern.

Coffee lovers will find all of their favoriteCoffee lovers will find all of their favorite features and then some with this 1-cup coffee maker. This coffee maker has the ability to make three styles of coffee, Nespresso, Dolce-Gusto and Ground Coffee. Complete with 19 bar high pressure pump and quick brew system you can customize the prefect beverage for any scenario.See Full Product Description

Coffee lovers will find all of their favoriteCoffee lovers will find all of their favorite features and then some with this 1-cup coffee maker. This coffee maker has the ability to make three styles of coffee, Nespresso, Dolce-Gusto and Ground Coffee. Complete with 19 bar high pressure pump and quick brew system you can customize the prefect beverage for any scenario.See Full Product Description