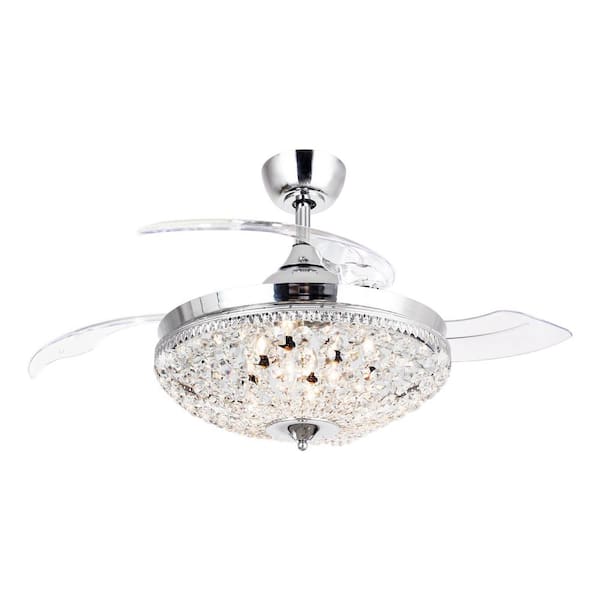 This fancy ceiling fan both functional and stylish, provides with both functions of traditional lamps and fan. The chrome chandelier light with decorative crystals provides bright illumination, full of enchanting crystal accents that sparkle when illuminated. Features the retractable blades, when switched off, the intrusive fan blades automatically retract and conceal, visually the unit transforms into a slim, modern chandelier.

The fan speed and light can be controlledThe fan speed and light can be controlled separately by remote control. Provided with both functions of traditional lamps and fans. That makes it very convenient for you to use in the living room, bedroom and so on. When you turn on the ceiling fan, the blades will stretch out, while when you turn off the fan, the blades will put inside automatically. Exclusive motor technology and remote system that ensure your fan will remain Quiet for life.View Full Product Description

You will be shocked at this modern yet traditionalYou will be shocked at this modern yet traditional chandelier that doubles as a fan the perfect combination of glam and function. It has an independent light. The blades retract when the fan is not in use it, how cool is that the crystals are beautiful and sparkly. Don't worry, the crystals do not move or make noise when the fan is on, it is perfect for your bedroom.View Full Product Description