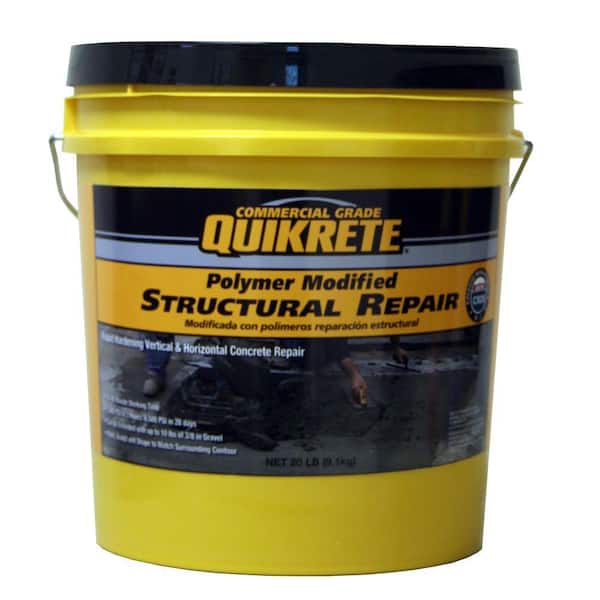 (168)Questions & Answers (99)
Truck
Save up to $100♢ on your qualifying purchase.
Apply for a Home Depot Consumer Card

5
Filter by:
Showing 1-10 of 168 reviews
Mar 31, 2021
I've had good success patching my driveway with this product....
I've had good success patching my driveway with this product. I contacted the Quikrete Customer Support and they provided alternate instructions for mixing a small batch of this product. (5lbs of product to 11 oz of water.) Follow the direction carefully. Cleaning of the damaged concrete area is required to get this product to adhere properly. Attached is a photo of the completed repair of the broken / chipped driveway area along the expansion joint. The broken area was 2in deep x 6 in long x 3 in wide. The cooler of the patch is not an exact match but it is very good.
by LRB45305
Oct 8, 2020
A Mason/GC/Foundation Repair Specalists Newest Best Friend
Eventhough, I like Quikrete's Rapid Setting Repair cement, it lacks the structual fortitude (psi) for anything besides cosmetic issues. Anyways, for corner pops I had switched from the aforementioned product to CTS cement all. I was pretty excited when I saw it in the store. Two days later, I found a large corner pop and decided to give this a shot. I've enclosed pictures as well for you to see dimensions for yourself. I did this whole repair using only a margin trowel and a brick trowel. I found that I could build anywhere from 225 in high full depth before any sag or slumping occured. so the first layer was about 4 and 1/2 in high built out almost to the existing exterior of the cinder block units then I waited till that had set up almost fully, about 30 45 minutes, and repeated the process until the entire area was filled except for a one-inch by one inch by one inch Gap at the top was all that remained only because I ran out of product at 9:30 p.mm. When I got back the next morning, the wall was completely set and Rock Solid, I filled the last remaining tiny Gap which I had to buy an entire another bucket for, a darn expensive 1 cubic inch repair. altogether I'm super impressed with the workability of the product and how quickly it set up not to mention the amount of product you could apply vertically in one pass with no slump at full depth, i did add rebar in the block, but still, this product allowed me to repair a huge Corner pop quite deep freehand with nothing more then a brick and margin trowel in less than 4 hours (minus the gap between me running out and the next morning!) . That's pretty impressive, but what was even more impressive, was when I went to scarify the wall in preparation for the exterior parge coating, I couldn't get a scratch even into the surface and even using a segmented diamond wheel on my DeWalt 4.5 inch grinder it's still was a task cutting into the stuff. I've never seen so many Sparks come off of that wheel from concrete or any masonry product in my life it was like I was cutting metal. When I say the stuff is strong I mean it is strong strong AND IN 24 HOURS mind you. The weird thing is the 30 day PSI on this product is 6500 or 7500 based on the specs whereas cement all is rated up to 9000 PSI at 30 days. and as much as it is a task to grind into that as well, this stuff was even harder in my opinion. I'm going to use on a large block Foundation wall repair beginning next week along with cement all. Cementall for the larger amount of open space and this product for the smaller areas and finer surface work. I don't recommend products easily as I'm very picky, a perfectionist to the extreme, as well as, working for clients who are usually very particular as well, but this stuff I definitely recommend!
by ANTHONYatIANNONEbuilding
1 person found this helpful
Jun 23, 2020
I used this to repair my front steps . They look amazing
I used this to repair my front steps . They look amazing
by Storm2511
2 people found this helpful
Jun 1, 2020
This stuff is excellent! I am using it to repair a fountain that had crumble to dust and this wor...
This stuff is excellent! I am using it to repair a fountain that had crumble to dust and this works great on vertical surface too. i mixed it up and used it almost like modeling clay and it has hardened and acted as it were cast concrete.
by rodenthotel