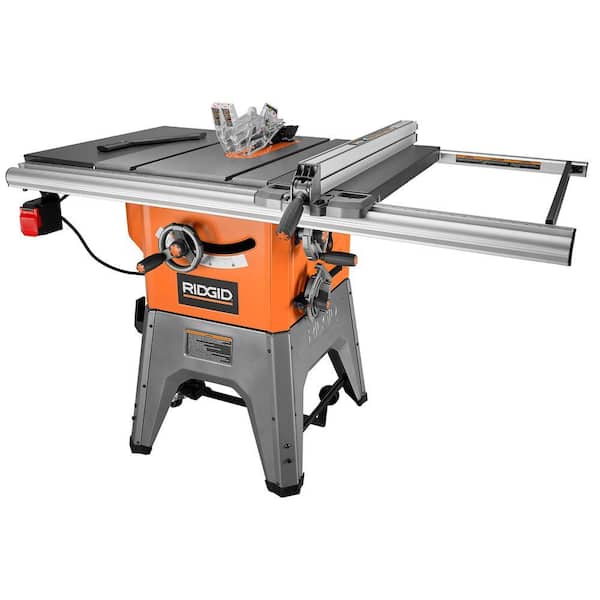 This RIDGID 10 in. Professional Table Saw features a powerful, 13 Amp motor for speeds up to 3450 RPM. The cast iron table's milled and polished surface minimizes vibration and provides a flat, level surface for trouble-free cutting. There is a blade guard for safety. Customize your table by adding an extension or auxiliary tables for routers or other specialty tools.

Can this R4520 table saw be operated at home (i.e., residential) or more for commercial? I read some contractor table saws require more voltage than a residential home has. I have a newer house built in 1998 and I believe I have enough power.

I'm a USA trained Electrical Engineer. The R4520 is rated for 13 amps operation; therefore, it will run on USA residential power. That said, since a USA residential 120V circuit is typically limited to 15 amps, you should not run another item on the same circuit at the same time (e.g. a shop vac or dust collection system). So if you intend to have a dedicated area where you will use the saw, it is commonly recommended that is have a dedicated circuit.

Looking to replace the fence assembly with a longer one to accommodate bigger material. Any suggestions?Or is there to extend the existing stock fence?

Best fence I've ever used is the Incra LS fence. But pricey, but works on any saw and is ridiculously accurate and repeatable

Why was discontinued this model table saw??

It’s underpowered. Many times mine doesn’t have enough power to cut all the way. I have to back the board off, let it get more power and start again. I’d like to get rid of mine.

Is this belt driven or direct motor table saw?

a search of the literature indicates that the difference is the electric motor. Both are rated at 13 amp. The R4520 has a air cooled induction motor where the R4512 has a conventional armature electric motor. The size and all other features appear to be the same.

any issues with the alignment of the rip fence?

Hi Bob. There should not be any issues with the alignment of the fence. If you have an issue please call our customer service for help. 866-539-1710. Thanks for asking. Greg

Has anybody upgraded the factory fence and rails and interested in selling the old ones?

I have seen a few guys that upgraded to some pretty fancy Incra Fence & Rails. They are pretty pricey and the set-up on this saw is very good As-Is. I can't see spending more than you paid for the saw, to upgrade a very good fence.

Is a solid table available for the RH side of the saw? If so, how much is it?

Several years ago I made a wooden table saw table extension (plans were in the owners manual) that works fine). Also at that time I saw a metal table extension that would fit, I believe it was on the ereplacement parts website. Good luck.

Where can I see it on display?

I have never have seen it on display in any of the stores I have visited.

Its a bait and switch. That home depot will not price match home depot online is rediculous. SO do this. Buy the one online and wait two weeks for it to arrive. Once it does check it out and if their are issues, return it for an exchange in the store. Rinse and repeat until you get a good one or give up. If you do not have the means to transport something this big and heavy back and forth to the store, then do NOT but this saw

74
Filter by:
Showing 1-10 of 1,238 reviews
Mar 29, 2020
What’s everyone complaining about??
I had this for all but five years now. Seems like everyone is looking for things to complain about. I had a small alignment problem at first but it remedied easily. Use your squares to line things up. It took four years for me to have to re align the right side extension table but I use my saw for everything since my basement shop is small. I glue and clamp on it, hammer things on it and varnish things on it, it’s a tool. The guide numbers on the left side are drastically off, I never replaced it, why? Because I own this thing called a tape measure! Three things I didn’t like: 1- as mentioned, the measuring scale on the left side was out. 2- the screws that hold all the plates together on the stand were rusty but, they sent me new screws, problem solved 3- the dust chute was on the very bottom, problem was easily solved, I made a wooden brace with a gate on it, much easier to take the hose on and off since I have to share it with other tools. I’ll add a picture. All in all I find this table saw a really good buy, once it’s lined up it’s great for everything I used it for and the wheels are a huge plus since I have to move it around to play musical tools, basements too small for everything I have. As expected, it’s very heavy so you’ll need help to load it, unload it and to turn it over once you get it put together. Hope this help, good luck with yours Use the directions to line up the motor, and the rip fence (fence can be a bugger). One other thing, wax the top and the rip fence to make everything slide along easily.
by Chucky944

Customer review from ridgid.com
Mar 22, 2020
Good beginner saw, has some problems
I bought this saw march 2020. It took me roughly 6 hours to assemble, tune, and troubleshoot before I made any cuts. I think its a good hybrid between a proper cabinet saw and a jobsite saw. Lets start with the bad: 1. Before I even started assembly or pulled the main unit out of the box the miter angle adjustment screw rod was bent noticeably. 2. The table extension wings are thin press folded steel and are a small pain in the rear to align square during final assembly. The surface of these wings is slightly concave on one and noticeably concave on the other. This is from the machine bending process and is unavoidable with the thin metal used. Replacing these with custom hardwood or thicker steel will be the first modifications I'm doing. 3. The measuring tape on the fence guide was massively out of alignment on the left and a full quarter inch off on the left. 4. The plastic feet on the legs just seemed inadequate, but the wheels make that less of a problem. 5. I dont know if I've got the wrong nut handle on it or what, but the saw height adjustment wheel nut keeps coming off when spinnin that wheel. 6. The saw blade that came with the unit was absolutely garbage. Out the box it was relatively dull and bent by a 32nd of an inch. burned out on cuts and kept grabbing the wood with the side of the blade and pushed back. not kickback, pushed. It wasnt unexpected, but it was disappointing for the price of the tablesaw. replaced it with a cheapo irwin 24t saw and it cuts like buttah. 7. This is a biggie for me, as a novice woodworker. The throatplate has issues, major ones. The two biggest are that it does not sit flush with the table. its a 16th or more lower than the cast iron surface. Any peice I run through this I have to remember that untill I throw this plate in the garbo. The set screws do not fit flush, at all, and are not hardend steel. I kinked the phillips out of one with a thumb and forefinger tightening it. The second big issue came at the back of the plate, in the picture. If you barely tighten the rear screws, the tension between them torques the corner of the plate uowards. tight enough it will rise above the surface of the table. The Good: This thing is a really good beginner table for the price. Its mobile, sturdy, with a well designed dust collector. 1. Assembly, I had this thing fully assembled in about 3 hours. I was able to do it solo but I wouldn't recommend that cause this thing is HEAVY. 80% of the weight us in one assembly. It took me another 3 hours of fine tuning and reading to get it up to snuff and ready to use because reasons. 2. The castor leg assembly. I was expecting some rinky dink parts here because this is a prime place to save some bucks. Nope, this is as solid as you can get. i firmly believe the stamped steel legs will crumple before this assembly does. it rolls with barely a shove and dosent need too much force to deploy. bravo. 3. The fence and guide assembly. Tbolt slots across the entire bottom, nice touch. a solid steel brace on the long side and tbolt slots on both sides of the fence. this thing was engineered for jigs for days. 4. The dust collection chute, with a 6 inch opening from the factory. very nice, but needs adapter for shop vacs. I do like that its intended for a bigger system from the get go. 5. The cast iron top. Perfectly level, nicely cast and came with plenty of machine oil preservatives on it. Not a spot of rust. 6. The LSA. I brought up all the issues above about the bent screw rod and the misaligned measure to Ridgid. The parts people talked to me for nearly an hour, and had the measure stickers ordered on the spot. They told me what will break with the screw drive and found a repair place nearby. Ridgid told me no problem, we can get it fixed now or when it eventually breaks at no cost. There was zero judgement or questioning on their end and it was hands down some of the best customer service ive received in a very long time. I will be calling about a solution to the throat plate but I dont think they have one for it and I plan on making my own inserts reguardless. All in all, This is a very nice saw for the money and will last you until you reach a level of experience that youre ready for a true cabinet saw. With some minor modifications I think this saw will easily last me in what i need out of it for the next 20 years. New out the box its about 300 bucks cheaper than most used cabinet saws that would outclass it. After talking with Ridgid about their LSA this tool cant really be beat and i will likely have this saw for life or untill i need something more powerful that costs 2 grand. Even then ill probably jerp this saw around. Images are Throar plate torquing Throat plate below table what the ridgid factory sawblade did.
by Old_Man