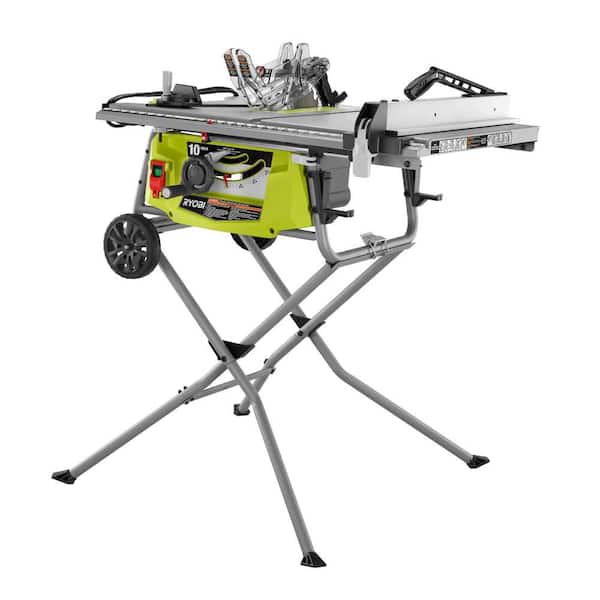 RYOBI introduces the 15 Amp 10 in. Expanded Capacity Table Saw With Rolling Stand. This saw features a 15 Amp motor and 5000 RPM to complete even the toughest DIY or professional jobs. The 15 Amp 10 in. Table Saw features integrated storage for accessories and a durable cast aluminum table top surface. The included folding stand has integrated wheels to provide users with easy portability. Backed by the RYOBI 3-Year Manufacturer's Warranty, the 15 Amp 10 in. Expanded Capacity Table Saw includes the Folding Stand with mounting hardware, a 10 in. blade, a push stick, a miter gauge, a rip fence, guarding assembly, anti-kickback pawls, and an operator's manual.

The Rockwell BladeRunner X2 Portable TabletopThe Rockwell BladeRunner X2 Portable Tabletop Saw is the solution to the problem of having to take materials back to the workshop to cut them, and then bring them back to the job site later on. If you're a contractor, you know that that process can add an entire day to a project. The BladeRunner is only 15 lbs, so while stable and sturdy, it's easy to toss in the back of the truck. And with a footprint of only 15.75" x 17", it doesn't take up an entire workbench like traditional table saws. The hold-down guard and splitter allow for work with wider materials, and a larger rip fence than other portable table saws provides better control and accurate cuts. A no-load speed of 3000/min, a stroke length of ¾", with 5.5 amps of power gives it the capacity for light to moderate cutting of wood (up to 1-1/2"), ceramic tile (3/8"), PVC pipe (1-1/4"), aluminum (3/8"), and steel (1/8"). (Anything over 1-1/2" and you're probably going to need a traditional, permanently fixed tabletop saw-but you can't take that to the job site.) The blades change out almost instantly, in under 3 seconds once you get the hang of the tool-less blade change system. And the saw is protected by a Rockwell 3-year limited warranty, so you know they stand behind their tools.See Full Product Description

The Milwaukee Cordless M18 FUEL 8-1/4 in.The Milwaukee Cordless M18 FUEL 8-1/4 in. Table Saw with ONE-KEY delivers the power of a 15 Amp corded saw with 24-1/2 in. of Rip Capacity and up to 600 lin. ft. of cutting per charge. Designed for the professional carpenter, remodeler and general contractor, the cordless battery powered table saw is optimized for power, portability and productivity. Integrated ONE-KEY Smart Technology enables wireless tool connectivity to smart devices including smart phones and tablets. It easily track and manage a tool's performance and location. The technology is built into the tool, not the battery, for tracking even on an empty charge. Integrated Tool Tracking provides full visibility to how and where tools are being used across your network of jobs and users within a 100 ft. range of your smart device. Integrated Tool Security protects your investments with features like remote tool lock-out or the ability to hide your tools from other smart devices. The POWERSTATE Brushless Motor was purposely built for the M18 FUEL 8-1/4 in. Table Saw with ONE-KEY to provide the power and performance of a 15 Amp corded circular saw.See Full Product Description

RIDGID introduces the 15 Amp 10 in. TableRIDGID introduces the 15 Amp 10 in. Table Saw with Folding Stand. This saw features a 4 second blade brake that will stop the blade in under 4 seconds. It also boasts a 27 in. rip capacity for ripping through large sheet goods. With registration, this saw is backed by the Industry Leading Lifetime Service Agreement meaning FREE Parts. FREE Service. For LIFE. The 15 Amp 10 in. Table Saw with Folding Stand includes a folding stand assembly with assembly hardware, blade wrenches, a 10 in. carbide tipped blade, a push stick, a miter guage, a rip fence, blade guard assembly, anti-kickback pawls, and an operator's manual.See Full Product Description