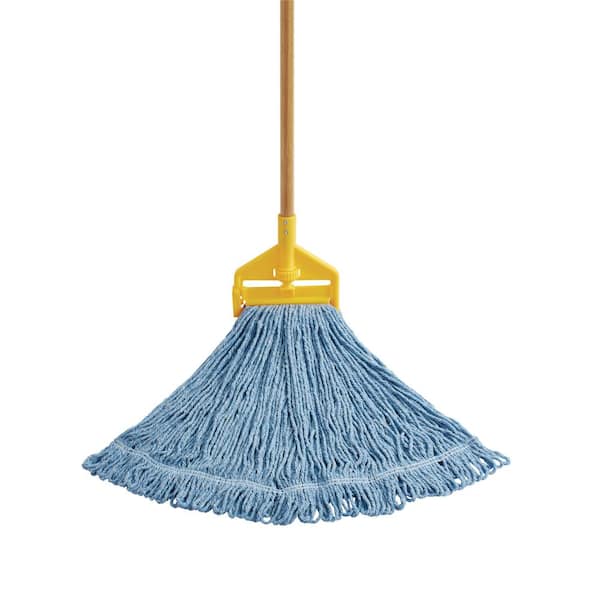 This Rubbermaid Commercial mop has a blended yarn mop head. It comes with a 48 in. Invader wooden handle for convenience. Mop is engineered for residential or commercial use.

The Quickie Jobsite heavy-duty wet mop isThe Quickie Jobsite heavy-duty wet mop is for the professional cleaner. Designed with a hardwood handle and galvanized steel clamp, this 100% cotton mop is made for your heavy-duty clean-up jobs. The mop head is 4-ply cotton with cut-end style yarn to minimize snagging and maximize absorbency. The replacement mop head is available under model number 0391. This mop is made to stand up to the toughest wet messes.See Full Product Description

Ensure your floors are spotless with thisEnsure your floors are spotless with this handy multi-purpose twist mop. Use to clean all types of floor ranging from wood, tile and even marble. With powerful scrubbing cotton strands it quickly breaks up stubborn stains, everyday spills and even the toughest messes. The ultra absorbent cotton head collects dust and debris more effectively than other fibers. Lightweight, it's perfect for both and commercial use. Perfect for industrial, janitorial and household environments. This twist mop with flexible cleaning strands is perfect for tidying and reaching around objects such as toilet bowls and pedestal sinks. It provides a thorough and gentle cleaning, leaving behind no scruff marks on your floors. Hand wash. Item dimensions may differ slightly due to the unique nature of the product. Color and finish may also differ from the images shown due to differences in monitor displays. Props and accessories are not included.See Full Product Description