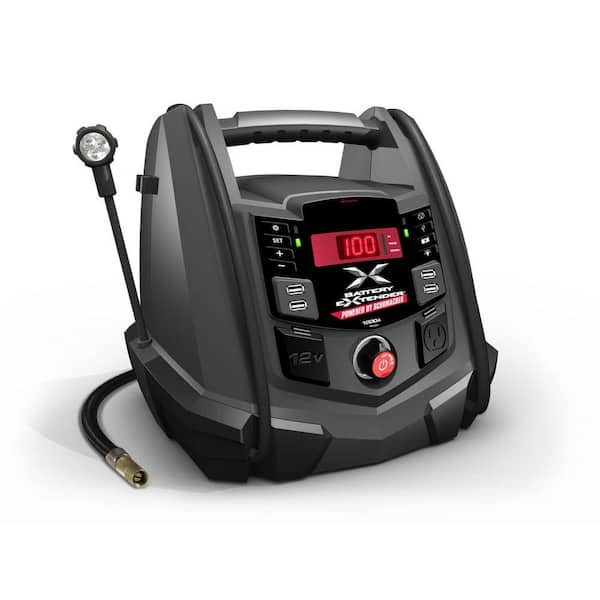 This 1,200 Peak Amp portable power station has all the power you need to jump start your 4,6 or 8 cylinder vehicle. With AC, 12-Volt outlets along with USB ports, it is the perfect to take on camping trips to power all your electronic devices. Included with this unit is an air compressor to inflate sports balls, car and bike tires.

53
Filter by:
Showing 1-10 of 433 reviews
Mar 24, 2022
Doesn't work
Brought this to keep in the house incase of car trouble, storms or other emergencies. After several various attempt to use to either jump our car or charge phones on. It wouldn't work.
by
Response from CustomerSupportApr 4, 2022
Thank you for taking the time to share your feedback. While I wish you had a better experience with our product, it is feedback like this that we learn from and use to improve. We take pride in our great products and customer satisfaction is our highest priority. We would like to speak with you to further discuss the problem. Please give us a call at 224-612-7284 at a suitable time so we can get this sorted out and make things right.

This jump starter helps you effectively andThis jump starter helps you effectively and conveniently jump your vehicle. It works on all shapes and sizes of cars with a 68-in. cable reach, it can be placed on the ground and still reach the battery and starting points. The alloy core and dual molded design is highly durable and the PowerJaw clamps deliver maximum power transfer (rated to 1,000 amps).View Full Product Description

Get power, air and a jump start when andGet power, air and a jump start when and where you need it with the VECTOR J7CV. It gives you both freedom and function. 800 peak amps of starting power instantly jump starts cars and trucks up to 8-cylinders. Powder-coated metal clamps are included. The reverse polarity protection assures that jumper cables are connected correctly. You can keep your laptops, phones, gaming devices and more powered up with the three USB ports. The swiveling LED light functions as a flashlight to help with low light or nighttime repairs. You can put your confidence in VECTOR because we have been delivering quality products for over 25 years.View Full Product Description

The DEWALT DXAEPS14 Professional Grade PowerThe DEWALT DXAEPS14 Professional Grade Power Station is built to satisfy all your mobile power needs. It's got one of our most powerful Jump Starters combined with a 500-Watt AC Inverter, USB power, 120 psi Digital Compressor and LED work light-all in a portable package you can store away in your trunk or truck bed with ease. It's perfect for tailgating parties, long camping trips or roadside assistance. It doesn't matter whether your car won't start, your phone battery is dying or your tire's running flat-the DXAEPS14 is the perfect tool for the job.View Full Product Description