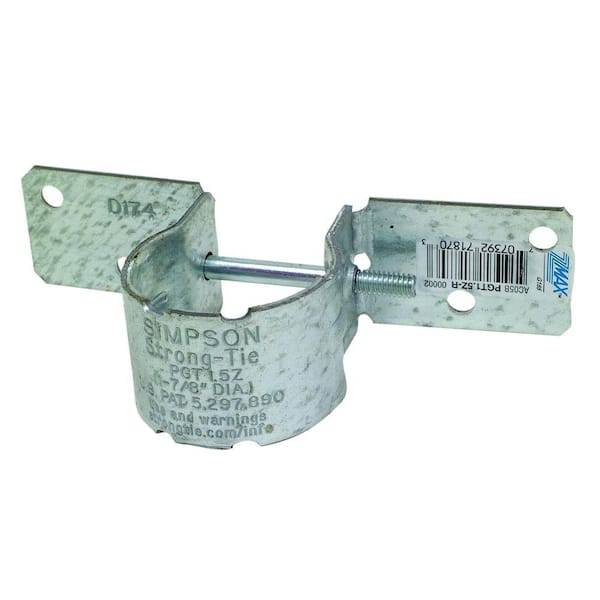 Simpson Strong-Tie Pipe Grip Ties make it easy to attach wood fence rails to metal fence posts. Galvanized fence posts typically last longer than wood posts, extending the life of the fence by helping to avoid the common problem of rotting fence posts. Now you can get the look of a wood fence with the durability of steel posts.

what is the gap between the metal post and the wooden beam?

I was thinking about using these to hold/make a pull up bar in my basement, attaching it to the r...

I don't think these were designed to support live loads from exercising.

Can I use this to support a 4x4x10 against my existing railing? The railing posts are held within...

If you use large, long screws I'm sure you can. These ties are very sturdy.

Yes.. That is the smallest that work for. And you have to tweaked the tabs a little bit to straighten them back out to 180 degrees apart after clamping it to the Post.

Hi What is the steel rating of this bracket? Like 12 Ga. steel or something else Thanks Regards Luke

It will work.I used it on 2 inch pipe and there were no issues at all.

What is the correct fastener secure my 2x4 cross bar?

looking for a 4" diameter round, full wrap fence brackets, but it seems the largest size is 2 3/8"?

I've never seen a 4-inch version of these. Have you thought about slipping a 4-inch vinyl post sleeve over the posts and attaching your fence to that?

Could I mount this to a concrete wall?

Certainly. They are often used for supporting conduit mounted to a wall.

6
Filter by:
Showing 1-10 of 77 reviews
Jun 11, 2020
Need privacy? These are the answer!
Added a privacy wood fence to our existing chain link. These worked great! Fast and easy installation. Fence is sturdy and stable.
by Gigi
Jan 31, 2019
Worked awesome. Best way I could find to use galvanized posts with anesthetic Woodward fence
Worked awesome. Best way I could find to use galvanized posts with anesthetic Woodward fence
by Drew
Oct 26, 2017
strong and flexible enough for all kinds of fence post angles.
strong and flexible enough for all kinds of fence post angles.
by nada1
Oct 10, 2016
Solved it!
I spent a long time trying to figure out how I could turn a 3-foot-tall chain link fence into a 6-foot-tall wooden picket fence. Eureka! This product made it possible, although I had to get a bit creative with it. First: Many, many thanks to the reviewer who suggested splitting open a length of plastic tubing to use as a gasket so the bracket would grip a 1-5/8" pipe. Worked perfectly. On the other hand, I tried the suggestion of another reviewer to replace the supplied bolts with shorter ones and had no success -- they just snapped under the tension created as they were screwed in. Clearly, the Strong-Tie folks use higher-than-average quality hardware. So here's where I added my own hack to the mix. I attached two ties to each pipe, one a few inches from the ground and the other at the very top of the pipe, with the flat side facing inward instead of outward. Then, instead of attaching horizontal rails to the ties, I screwed 2x4s to them vertically, placing one on each side of the pipe. I had to use an angle grinder to cut off the end of the long bolts so there would be enough room to butt the narrow edge of the 2x4s to the "wings" of the tie. Then I screwed through the wings from the outside (opposite of the way you'd attach rails). Since my pipe was only three feet tall and my 2x4s were 6 feet, that left 3 feet just sticking up. I cut 5/4x6 boards and screwed them to the front edges of the 2x4s, thus creating a sort of stick-built post. Then I attached Strong-Tie fence rail brackets to the sides of the posts, added my rails, and attached my pickets. Added some trim pieces at the corners of the posts, some 5/4x6 panels on the backs of the posts (had to cut them around where the brackets protruded), and post caps. A huge success! All my neighbors keep stopping their cars to tell me how great it looks. And with any luck, it will keep the darn dog in, too. Remains to be seen how well it stands up over time.
by Schufrei

11 people found this helpful
Jun 15, 2015
Great for Handrail Posts
These are handy for more than just building fences: I used them to build handrails for my outdoor stairs. I used these pipe grip ties to fasten the 1 1/2 inch galvanized pipe posts for my handrails to the side of my stairs. At the top of each 1 1/2" post I then used Kee Klamp 555 Top Fix Rail Assembly to fasten 1 1/4 " galvanized pipe for my ADA compliant handrails. These Simpson Pipe Grips fit 1 1/2" galvanized pipe perfectly, are very cost effective, and made for a very sturdy handrail post assembly. Constructing handrails out of galvanized 1 1/2 pipe for the posts and 1 1/4 inch pipe for the actual handrails made for a very good looking, strong, code-compliant, ADA compliant, and long-lasting outdoor do-it-yourself handrail project. I attached these pipe grip ties with Red Head 1/4" concrete stud fasteners (drilled holes with rotohammer) to my concrete steps and this made the posts very sturdy.
by NW
1 person found this helpful
May 25, 2015
Metal fence posts to wood fence rails
The machining was uniform; the bolts to tighten the tie to the galvanized post were easy to tighten; the pre-drilled holes to screw the wood to the tie were spaced right. All in all a great product that performed as it was supposed to.
by Zip

2 people found this helpful
Jul 2, 2013
This product worked great!
We used these to put up a privacy fence on existing metal poles from a chain link fence. Putting up the fence was so easy since we did not have to dig and set new posts. I'm so glad we found this product.
by Hilltop