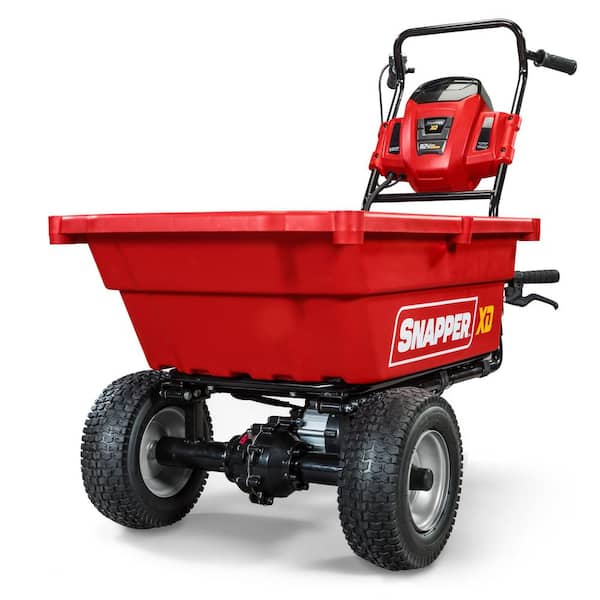 How does one restrain it with a load when going down-slope? With our yard, that the hard part. ...

Would this be good for concrete mix jobs?

Absolutely. You might have to be aware of the weight of the concrete you are hauling. But this cart is a work horse. Not good on mud.

Where to buy battery & charger*

Briggs & Stratton Store online. A little cheaper, but with shipping, about the same as HD.

What is the total weight?.

Hello on the website in the specifications it says 88 lbs.

Hi, how many watts is the motor's power?

Why doesn’t Home Depot list the exact battery and charger that goes with it? Can someone guide m...

Sure, here's a link, hopefully you'll be satisfied with that thing because I sure wasn't. https://www.homedepot.com/b/Outdoors-Outdoor-Power-Equipment-Replacement-Engines-Parts-Replacement-Parts-Outdoor-Power-Batteries-Chargers/Snapper-XD/N-5yc1vZbxd3Z1z0kgzd?storeSelection=3859,6931,3824,3809,3804&experienceName=default

Does this have a braking system?

Would you recommend this for hauling horse manure down a short hill? How much is the battery and...

This utility cart should be fine to use for that particular purpose as long as you keep some things in mind. The loading/weight capacity for this cart is 220 pounds. We do not recommend using the utility cart on a slope greater than 16.7 degrees, especially when loaded. You will want to exercise caution when going up and down the slope/hill and make sure that you do not park the cart directly on the slope as well. You can find the Briggs & Stratton 82V 2.0 Ah battery (model number 1760266) here: https://thd.co/2K3c80y, the 82V 4.0 Ah battery (model 1760265) here: https://thd.co/3eJ3YYJ, and the 82V battery charger (model 1760263) for those batteries here: https://thd.co/2V5psIa

Can you ONLY use the 2.0 briggs and stratton lithium battery? I can't seem to purchase one unless...

Thanks for the answer, but the problem is that the batteries are out of stock and can't be purchased separately from available tool kits. Disappointing. I didn't purchase this product because of this issue.

what is the warranty?

8 people found this helpful
Apr 23, 2018
Oh YES! Wow this Snapper Battery operated cart is so helpful! If your an outside enthusiast and...
Oh YES! Wow this Snapper Battery operated cart is so helpful! If your an outside enthusiast and spend all day gardening, planting, mulching, moving sod, moving rocks, carrying firewood, etc then this is the cart for you. I have a pull wagon which was convenient but this is so much more helpful. It's made well, has a fast and slow speed, goes forward and backwards, quick release lever to dump contents, has a break petal, 3.7 cu ft and 82 volt battery. The battery and charger are sold separately. We have used this for the past two days, run time was about 3 hours and still had life left in the battery but we decided to charge for today's workload. We have a lot of property with slopes and it worked very well. Slows a little going up hill and gets away a little when going down hill (just like a car) but gets the job done. The brake really needs to be pushed quite hard to engage. Easy to dump with the quick release lever. The throttle lever is conveniently located. There is a steel hitch for towing that folds away when not in use. The tires are 12" by 5" turf tires. There is a lock out button that times out when you stop, just push it and it will go again. The battery charged quickly, easy to insert and take out. Being self propelled makes it easier to maneuver. This is convenient for anyone to use (especially for us as we are getting older) but would be especially useful for senior citizens to continue to be active outside, gardening , landscaping, carrying wood etc. We are loving it.
by Mrsocks