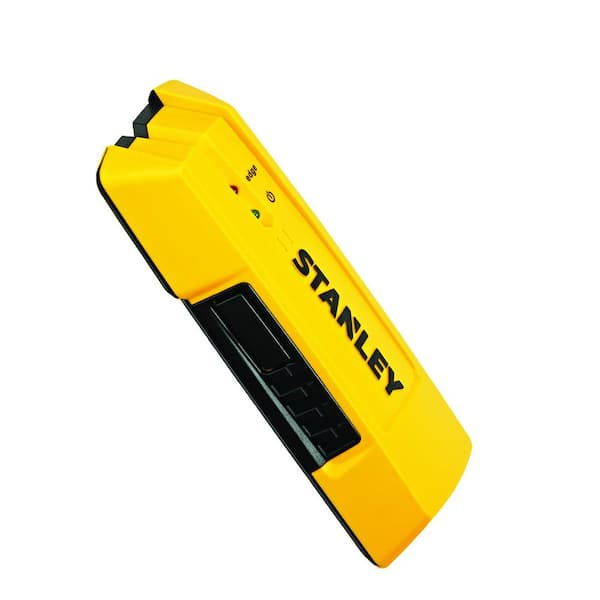 The S50 stud finder detects wood and metal studs up to three quarters of an inch below surface material and features auto-calibrating AC detection. With a sturdy design, this stud finder indicates when it senses a wood or metal stud below the wall surface. Sequential LEDs mark both the edges and center of studs with accuracy up to 1/8 in. for wood and 1/4 in. for metal.

47
Filter by:
Showing 1-10 of 204 reviews
Nov 14, 2021
Disappointed
I hope you don't find me rude for being forward, but I purchased one of these exact models and it does not work well at all. It either says the stud is 2 feet wide or it says there is nothing there at all in the same spot. Very inconsistent.
by
Response from CSDec 1, 2021
Hello ​, We appreciate your feedback on the 77-050 and are sorry to hear about the issue you are having with your product.  This is not the kind of performance we expect from our products and would like to speak to you about this issue so we can assist you in resolving this to your satisfaction.  Please email us at wecare@sbdinc.com and reference ticket # 3385565​. We look forward to hearing from you. STANLEY TOOLS®​ Support

Customer review from stanleytools.com
Mar 30, 2021
Great product that does what it's made to do
[This review was collected as part of a promotion.] I got this product from stanley and had the chance to use it for several weeks for this review. It's like my old stanley stud finder but seems to be more accurate. It's pretty much spot on to the edge. It came in handy putting up new shelves in several rooms this past week. Well made product but after 2 months of moderate use i had to replace the battery. My old one would go longer but it could just be a problem with the battery.
by

Customer review from stanleytools.com
Feb 20, 2021
Best stud finder I've ever used
[This review was collected as part of a promotion.] Love the button to activate the sensor is part of the grip. It's easy to use on walls and ceilings , house, garage or eve sheds. Always love the easy to find Stanley yellow color. I am very happy it uses a 9 volt battery as it seems to be a more powerful finder .
by

Customer review from stanleytools.com
Feb 15, 2021
Easy to use with cool pencil marking feature
[This review was collected as part of a promotion.] This stud finder is a perfect size and is very easy to use. I find the handy notch at the top perfect for marking the wall with a pencil to show the stud edge. The only reason I am not giving this 5 stars is because of the 9V battery connection - when you attach a 9V battery and try to stuff the battery into the compartment, you are forced to bend the wires to an angle that feels like it will cause them to disconnect eventually.
by

Customer review from stanleytools.com
Feb 13, 2021
Stud Finder
[This review was collected as part of a promotion.] This Stanley Stud Finder comes in very handy when mounting Tv's and Frames. The thin design is very helpful and fits right in any size hand. The operation is simple and anyone can use it. The Marking Notch helps with labeling when a Stud is found and its edge, the activation button is in a very unique spot where it is easy to press and activates instantly.
by

Customer review from stanleytools.com
Feb 13, 2021
A simple tool to use
[This review was collected as part of a promotion.] I usually just use rare earth magnets to find studs, and they work very well. However, there are times when I need to find edges of studs. That’s where a tool like this works better. Simple and easy to use for anyone.
by

Customer review from stanleytools.com
Feb 12, 2021
Basic low cost stud finder
[This review was collected as part of a promotion.] The Stanley basic (low cost) S50 edge detect stud finder is a simple easy to use tool. Just press the button, wait for the red light to go out and glide the stud finder slowly along the wall. Mark the location where the red light comes on and goes off (the stud location). You should go back and forth several to times to confirm the readings. It uses a 9 volt battery which is not included. The battery is installed without any tools. This is handy for removing the battery when putting it away for an extended period of time. While it is a good basic stud finder, it will not work on all walls. The stud finder worked on five of the seven walls I tested. You may need to try several wall locations (high, middle or low) when initially starting. If the red light will not go out when you start, you may need to move a little sideways to ensure the stud finder is not on a stud. It is easy to blame the machine when it does not seem to be working when the problem may be operator error, like having a hand on the wall during testing. When reading reviews of more expensive stud finders you will see that they also do not work on all walls. I took off one star for this edge detector not working on all walls but maybe my expectations for stud finders are too high.
by

Customer review from stanleytools.com
Feb 3, 2021
Simple and effective
[This review was collected as part of a promotion.] Simple edge detector/stud finder. The 9v battery should last ages in this tool. Detects stud edge with ease and accurately. Button is flush but still easy enough to locate and press with either hand.
by

Customer review from stanleytools.com
Feb 3, 2021
Great tool
[This review was collected as part of a promotion.] We bought an older house and everytime I thought I would find a stud to hang a picture It was not a stud so I would just end up putting holes in the wall. The studs seem to be just randomly put in my house so this thing is the best and now I can hang things without having to damage my walls with holes. It’s light weight and it’s a great size that fits into your hand.
by

The StudSensor HD35 stud finder featuresThe StudSensor HD35 stud finder features a bright, easy-to-understand interface. A wide, contoured grip for comfort and ease of use, provides optimized visibility and a secure hold at any angle. Find the edges of wood and metal studs to securely anchor pictures, mirrors, and shelves to the wall while also avoiding live AC electrical wiring.See Full Product Description

This Center Sensor Stud Finder has a detectionThis Center Sensor Stud Finder has a detection depth of 1-1/2 in. for wood and metal. Traditional stud sensors locate the edge of the stud, but our new product locates the center for a more efficient read, even when held at an angle. Plus, it is constantly calibrating to save time during use. An audible alert and directional LED arrows clearly notify you once the stud is located and you can easily mark the center of the stud with the center marking channel.See Full Product Description