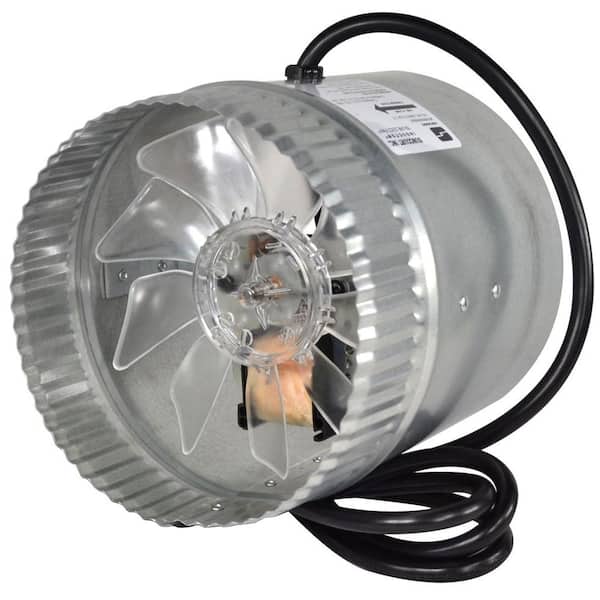 The Inductor 6 in. Corded In-Line Duct Fan is engineered to overcome back pressure and boost air in forced air heating and cooling systems without upsetting the balance in the closed loop system. The DB206C boosts airflow in ducts with low air delivery to improve comfort and energy efficiency. If you have rooms that are too hot or too cold due to poor airflow, this is an efficient and economical solution.

22
Filter by:
Showing 1-10 of 113 reviews
Jun 10, 2021
Failed after 2-3 years
I purchased this fan to increase airflow to my sun-facing 2nd floor bedroom/office, which became quite warm in the summer despite a central A/C system. The fan integrated nicely into my 6" basement ductwork (see photo), and was very quiet. The resulting decrease in room temp from the increased airflow was modest, but nevertheless much appreciated given how uncomfortably warm the room was. Fast forward 2-3 years later, and the improvement was less noticeable -- were the summers just hotter?? I couldn't tell if the fan was running -- it was so quiet. I eventually climbed up to the ductwork to listen to the fan... only silence. So I uninstalled the fan, only to find out that it had failed sometime in the past 2-3 years. (Photo 2 shows an open-circuit failure for the like-new fan, also confirmed by connecting to 115VAC.) Accordingly, I can't recommend this fan for several reasons: 1. Fan motors shouldn't fail in 2-3 years. Motors are not new technology: I've never had a bathroom fan motor fail in decades. 2. The motor is so quiet, it's hard to tell if it's failed -- unless you want to tear into your HVAC system to find out, or buy an AC ammeter to check motor current. 3. When the motor spontaneously fails, it goes from *enhancing* airflow, to *blocking* airflow -- *worsening* the problem you're trying to overcome. 4. The $38 fan cost is not the biggest loss -- it's the time spent uninstalling it from your system, just to see if it's working. Instead, I highly recommend researching "inline booster with removable fan". They're more expensive, but the central fan assembly can easily be removed for cleaning and diagnosis, which can save a lot of pain in the future. That's what I upgraded to.
by
Response from Suncourt Product ExpertJun 11, 2021
We are sorry you had a problem with our duct fan. It is not everyday that someone actually complains that it is too quiet. They are known to be quiet but that is by design. Typically under normal operating conditions our fans run for many years. We use the motors we use because they are proven technology. An open circuit means that the thermal fuse blew in the fan so that it cannot overheat and cause a problem. The fan, as most fans in its class, is rated to 140F. You mentioned climbing up to it. If it was installed in an attic, while not usually an issue, and the heat was consistently approaching the upper limits of the fan specs it would have triggered the motor fuse to eventually blow disabling the fan. The fan does not block airflow when not running. The fan blade spins freely with any airflow going through the duct even if it is low airflow. It does not worsen the problem. You may have perceived this as worsening the problem when in reality your airflow returned to its original slow rate of flow. The fan you replaced it with may be a good fan but you will still need to get into your duct work to remove and inspect it to be sure it is running unless it is noisy enough that you can hear it when it is quiet in the house such as in the middle of the night. It is also more expensive. Whenever there is a problem with one of our products please call us at 800-999-3267 or email us through our website at www.suncourt.com. You will get a quick response and we will be happy to help resolve the issue.

1 found this review helpful
Dec 3, 2015
Helps stretch your heating dollar$$$
Many of the older HVAC systems have rooms at the end or the middle of the system that just don't receive enough air (heat/cold) due to many reasons... This simple well built fan will help solve those problems. All you need to do is cut into your 6 inch duct, and screw and tape the fan in place. Then what I did is wired it up using the optional ductstat device which turns the fan on and off as needed so you don't have to think about it, And the switch is low priced enough to be well worth it. I now have a room that is cozy warm and no more family complaints about it being too hot/cold,,,,,,
by
7 found this review helpful
Nov 18, 2015
Good Fan, should come with the DuctStat
This fan is very quiet and fits inline between ducts. It provides a decent boost with a single speed. The free air CFM is 160 and maximum boost is 250 CFM. It has a three prong wall plug which can to be plugged into the optional DuctStat temperature sensitive switch (not included). It would be nice if it came with the switch. Installation is very easy since it comes with one crimped end.
by
2 found this review helpful
Mar 9, 2022
Doesn't blow much air...
Doesn't blow much air
by
Response from Suncourt Product ExpertMar 10, 2022
The DB206C Inductor Fan blows air at 160 cubic feet per minute as advertised. It is designed to boost airflow in duct work to poorly performing registers to help them more efficiently heat and cool rooms. Properly installed it works very well for this purpose. It can also be used in other applications where increased airflow is required. It is important to match a fan's output to what is needed for a project. Please contact Suncourt for help with your particular need.