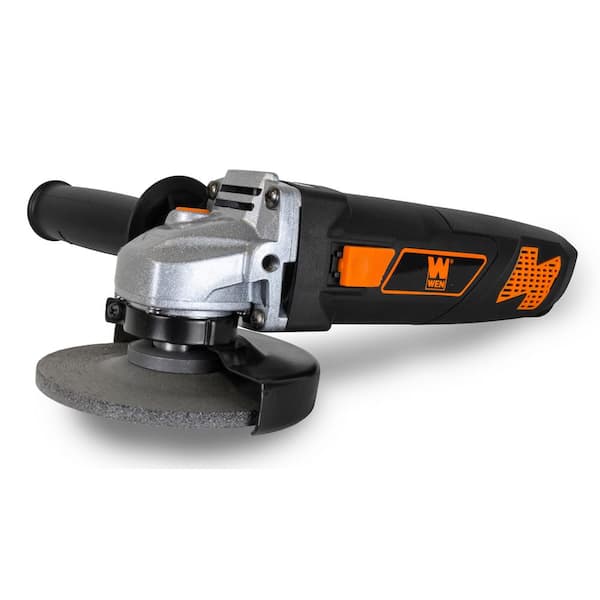 Remember when you could cut through even the hardest of metals. Let the sparks fly with the WEN 4-1/2 in. 7 Amp Angle Grinder. Our lightweight design weighs in at a mere 4.6 lbs. while the rubber-backed gripped creates a fatigue-free user experience during grinding operations. The lock-on side switch snaps into place to keep the machine running without constantly holding your thumb down on the trigger. The reversible handle can be attached to either the left or righthand side of the grinder depending on the operator's preference. The 7 Amp motor generates up to 11,000 RPM, powering through rust, chains, pipes and more. This package also includes 1 arbor adapter to allow for both 5/8 in. and 7/8 in. grinding and cutting wheels, an adjustable blade guard and a 4.5 in. grinding disc. And, because it's a WEN product, your 4-1/2 in. 7 Amp Angle Grinder comes backed by a 2-year warranty, a nationwide network of skilled service technicians and a friendly customer help line all to make sure you remember WEN.

Squeeze into tight spaces to singlehandedlySqueeze into tight spaces to singlehandedly complete tasks with this shallow-profile compact grinder from DEWALT. When 2 hands are better, grip the (removable) side handle to apply more pressure and stability. A simple on/off switch engages the 7 Amp motor on this small-angle grinder, delivering a robust 12,000 RPM. Attach, rotate and secure the One-Touch guard into one of several positions without any tools. Easily affix or remove 4-1/2 in. discs onto the flange with included wrench.See Full Product Description

The Bosch 1375A is a multipurpose tool designedThe Bosch 1375A is a multipurpose tool designed to grind sand and brush, sharpen and debur. This grinder offers a 5/8 in. to 11 spindle thread for attaching the most popular accessories. The slim housing grip is designed for easy handling, and the 2-position side handle is angled for comfort. The dust-resistant switch and the protected motor deliver longer service life. Save time with the spindle lock for quick wheel changes. Includes guard, side handle, flange kit, wrench and wheel.See Full Product Description