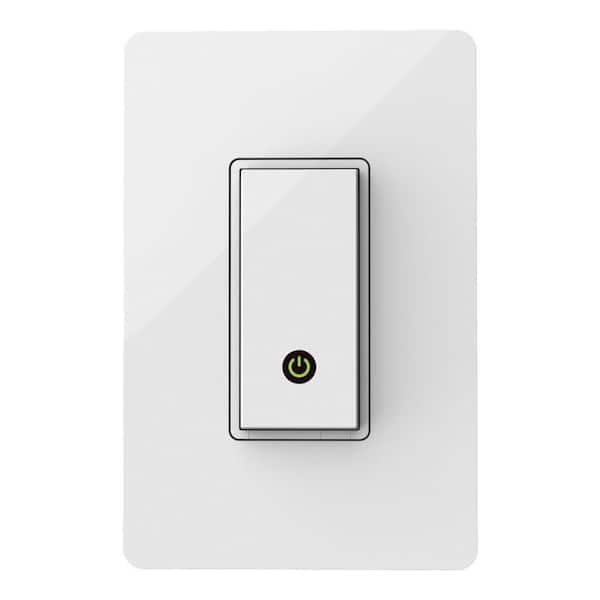 WeMo Light Switch seamlessly replaces your old, boring light switch, giving you control of any one-way connection light directly from your phone, wherever you are in the world. Using just your home Wi-Fi network and the free Wemo app, you can turn switches on and off from the office, the beach, or the back yard or set schedules so you never have to think about it. Connect Wemo with an Amazon Echo, Tap or Dot to control your lights and ceiling fans with voice commands. Compatible with Apple iOS 8 or higher and Android 4.1 or higher. Electrical Rating 120-Volt/15 Amp/60Hz/1800-Watt. Neutral wire required. Not recommended for use with a metal faceplate. 24-hour Wemo support is available at 1-844-745-WEMO.

Customer review from belkin.com
Mar 19, 2019
The Wemo Wireless Light Switch exceeded all my expectations. It was easy to install and the app w...
The Wemo Wireless Light Switch exceeded all my expectations. It was easy to install and the app works great. I love being able to set up the schedule and control my porch lights from the app on my i-phone. I was able to set up the Wemo Switch next to my existing Slider Dimmer Switch and am still able to dim the porch lights. The Wemo Switch also works great with Alexa.
by
Jan 9, 2019
Great Addition to your home
This is a must have for gadget lovers and especially if you are breaking into the "Smart Home" movement. These switches add to the look of your wall (kitchen and dining room, in my case) and bring a modernized touch. The build quality is typical Belkin and the fit-n-finish is top notch, with the switches having a smooth and solid feel when pressed. The button on the switch has a night light to aid in finding it in a dark room. It works with the app or with Google. Set up was relatively easy (as long you are tech savvy/electrically inclined) and the wiring was straight forward. The switch can be mounted on any wall with a single pole set-up and comes with all hardware and faceplate. Since it controls the switch at the wall, virtually anything can be controlled by it: Appliances, coffee makers, any type of light in the fixture, etc. The cons are; no 3-way-pole switch support, set-up fold-out guide is basic and not informative enough. If you encounter an issue not outlined (and you will...) in the Set-up Quick Start guide you'd better be good at troubleshooting. Only supports 2.4 GHz routers. This is something you certainly need if you are trying to build your tech'd out smart home.
by

Customer review from belkin.com
Dec 7, 2018
Easy to instsll
I bought this to replace a 10-year-old non-Wi-Fi light switch to control her front porch scheduling feature and the ability to control it from anywhere is great
by

Customer review from belkin.com
Jul 1, 2018
Good product but bulky
I just bought this product and find the WiFi adaptor very bulky ..it was almost impossible to fit inside the plate ..ended up breaking my wall plates..checked with other friends and they all complained about the same ..suggestion pls try to reduce the size /body behind the switch...
by

Customer review from belkin.com
Jun 30, 2018
Excellent!!
I love this.. Something I usually was layed in my bed and I forgot turn off the light!! Agrr!! But Now I don't have this problem I take my cellphone and problem solved!! If I don't know if turn off my lights before I leave the house don't worry wemo tell you!!
by

Customer review from belkin.com
Jun 14, 2018
Works Great!!
Bought two of this almost 5 months ago and two later with other switches and wemo plugs and works great! Easy install with clear instructions and youtube video help. Best part is it works with google assistant. Only thing I dont like the click sound and frequent firmware update and resetup after wifi reset. Other than this is one of the best smart products in the market.
by

Customer review from belkin.com
May 2, 2018
Wemo Light Switch
I bought 2 of these light switches, one for the front porch and one for my backyard landscape lights, and only wish I had purchased them earlier. Not having to be home to turn on these lights is such a relief. Plus I scheduled them to turn on/off when I wanted them to. Very easy to install and I have not had any issues as of yet. If you can install a simple light switch, you can install this. If not, just YouTube it!
by

Creating a rule through the Wemo app is normally easy. To assist you accordingly, send us a screenshot of the rule that you have attempted to save via WemoCares@belkin.com along with your phone number and the link to this post so that we can get you over to our Senior Technicians.

Customer review from belkin.com
Oct 12, 2020
panful setup
When they work they are good but they are always having issues with wifi. They dont work with 5 ghz. once they disconcet you have to resetup everything and cant delete old ? I would never buy these again.
by

Customer review from belkin.com
Aug 14, 2020
Issues with WiFi
We bought this about two years ago, and it’s always struggling to connect to our WiFi, or it drops the connection every time we reconnect it. I prefer a normal light switch over this
by

Customer review from belkin.com
Jul 3, 2020
Non functional since change of cable modem
Used to love this switch. However my light switch that has worked fine is now useless since I changed my home modem/router. It will not reconnect. I have gone through all of the procedures for troubleshooting: Restarted the modem, factory reset my light switch, reinstalled the app etc. The app successfully connects through to the switch, then to my wifi, then at the last step it (discovering you WEMO device) it fails and keeps saying “cannot add WEMO to your account.” I have tried multiple times. Same thing with my WEMO smart plug, same issue.
by

The WE-001 Wall Switch Receiver offers anThe WE-001 Wall Switch Receiver offers an On/Off function which allows you to control any lighting of appliances of up to 1000-Watt. Expand your receiver with the TM-318 Mini Snap-On Remote (kit WR-318), the SkyLink Remote Controls (TC-318), the SkyLink Motion Sensor (ID-318), or the Wireless Wall-Mount Transmitter (TB-318). The Wireless Wall Switch Receiver adds a stylish edge to your home. You may program up to 8 transmitters to each receiver, allowing you to be able to utilize and expand your SkyLink Home Control System.See Full Product Description

Whether your old switch controls a roomfulWhether your old switch controls a roomful of lights, chandeliers or a fan, replace it with the Geeni TAP Wi-Fi Smart Light Switch to control by touch, app or voice using Amazon Alexa, Microsoft Cortana or the Google Assistant. The smart switch installs as easily as a traditional light switch and connects to your home Wi-Fi in no time through the Geeni app. Using your home Wi-Fi, use 'Schedules' to set your smart light switch to automatically turn on and off while you're home or away. You can set your lights to turn on/off each day of the week at the scheduled times. This TAP smart light switch works with your home Wi-Fi-no hub required! Simply download the Geeni app, install your switch and connect. It also works with Amazon Alexa, Google Assistant and Microsoft Cortana. The Geeni TAP Smart Light Switch is only compatible with 2.4GHz Wi-Fi networks. For a safe installation, cut off power beforehand. These light switches work in a single-pole setup only and require a neutral wire to power the smart light switch. The Geeni app works with all Geeni smart home devices, allowing easy control of your home from your Android or iOS smartphone. Your home, One app for all. Geeni is the market leader of affordable and approachable smart home devices. Featured by Google, Microsoft, Amazon, CNET, The Wirecutter, The Verge, TechCrunch, ZDNet, TechHive, and more, the Geeni brand is at the vanguard of technology and features, but user-friendly enough for everyone.See Full Product Description

The SkylinkHome TB-318 Wireless Stick-onThe SkylinkHome TB-318 Wireless Stick-on OR Wall Mounted Transmitter Light Switch allows you to add a wall switch anywhere you want without running wires and paying for an electrician. Requires SkylinkHome Control Receivers to work (WE-001, WR-001, WE-318, LX-318 and more) The TB-318 installs in seconds to provide you convenient smart home anywhere wireless lighting control. Ideal for use on stairwells, entrance ways, garages and bedrooms. Turn your lights on/off or dim/brighten from two separate locations.See Full Product Description