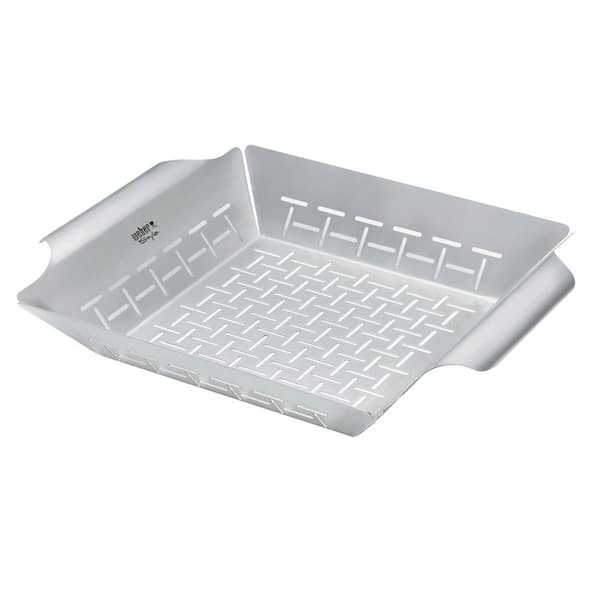 Grill vegetables, fruits and breads with ease in the Weber Stainless Steel Grilling Basket. It's constructed of 430-grade stainless steel for exceptional heat retention. It features slits to enable the juices to flow out and let your food breath.

3
Filter by:
Showing 1-10 of 217 reviews
Apr 25, 2022
Love it, ALMOST impossible to get clean
Bought this summer 2021 but used first time April. Roasted bell pepper, onion, mushroom, cherry tomatoes and Bok choy with EVOO, salt and pepper. Tasted fabulous! Allowed pan to cool before trying to clean it. Don’t have a pic how it looked after cooking but brown sides and trails on sides from oil and also on outside where it dripped through holes. After reading all the reviews I was sure I was stuck with it as it was and was disappointed it wouldn’t be gleaming anymore but a few googles found a solution that worked. I didn’t have a big enough pot to immerse it on stovetop so used a dollar store turkey roasting pan with water enough to cover one side at a time. Added 1/2 cup baking soda, set oven to 500°F (though lower would probably work). Brought water to boil and left it for thirty minutes. Used one of the green scrubbies others have mentioned with a little Dawn. It’s back to gleaming though if you look close you can still see marks where grease was removed. Docked one star because it shouldn’t be so difficult to clean and Weber, in replies to others about this blamed it in the flames and had no solution.
by

Customer review from weber.com
Apr 18, 2021
Great size and well worth it.
If you are looking for a grilling basket to continue to look shiny and new this won't be that one. The flip side is that it is high quality and a good size to cook for families. It is durable and utilitarian.
by

Customer review from weber.com
Apr 17, 2020
Great product!
For years I struggled to find a good basket that was a decent size for my cooking needs and high quality enough to withstand multiple uses per month. This product fills that need and works well on my Weber kettle and Weber Smokey Mountain.
by