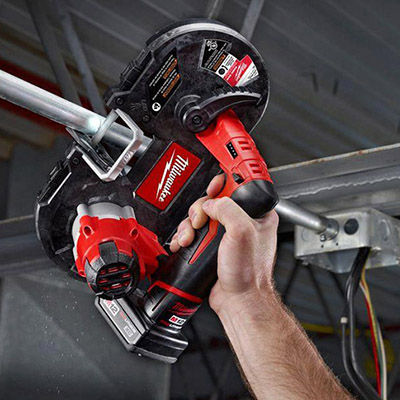 Band saws are the undisputed champ when it comes to cutting curves and slicing through thick material. Many small band saws can slice though lumber a full four inches thick, and bigger saws handle six-inch cuts. As an added plus, all this power comes from a surprisingly compact source – most band saws are under ¾ horsepower. This guide will help you determine what size and capacity band saw is best for your project.

Check that the blade guide system is easy to operate and that the resaw capacity matches your project needs.

Tip: Band saws are generally packaged with a rip fence (for resaw cuts) and miter gauge (for accurate cuts across the grain).

The blade guide system is a key component of a band saw. The upper and lower guides minimize sideways movement of the blade and also prevent the blade from deflecting backward when you feed wood for a cut.

The most common way to measure a band saw is to mark the distance from the sawblade to the column. That means a 10-inch band saw measures 10 inches from blade to column.

Resawing refers to the process of slicing a board through its width. Take a 2 x 4-inch piece of lumber, for example, which really measures about 1 ½ x 3 ½ inches. Resawing involves standing the board on its 1 ½-inch edge and sawing through the 3 ½-inch dimension.

At the end of a resaw cut, you can open the board like a book. Placing the two freshly sawn surfaces side by side gives a nearly perfectly matched mirror image of the grain pattern on both sides of the seam. Veneers or solid lumber panels with this symmetry are called bookmatched.

Once you see how bookmatching works, you'll probably want to try it on wider boards. Some saws let you increase a saw's resaw capacity by adding an accessory riser block. The cast-iron block bolts into the middle of the saw's column. Depending on your saw, you may be able to add 4 to 6 inches of capacity.

Although they can both produce curved cuts, a band saw and a scroll saw are distinctly different. While a band saw's endless blade produces a continuous cutting motion, a scroll saw oscillates up and down, so it's cutting only half of the time.

A scroll saw can produce glassy-smooth cuts right from the blade, but a band saw leaves a relatively rough surface. When you need a curve that will stand up to close scrutiny, the usual procedure is to band saw just to the waste side of the line, then sand to the line.

With a fine blade, a scroll saw can virtually turn on a point. By comparison, a band saw takes very wide turns. Remember that your blade's width limits how quickly it can turn. Scroll saws excel at internal cutouts, making them ideal for ornate work.

Accessories such as dust collection systems, stands and tilt tables help make your work with band saws easy and clean.

Dust collection: Some band saw models incorporate a plastic turbine blade to its lower wheel to create a suction that pulls dust into a bag. Other saws build in a port that you can connect with a hose to a shop vac or a dust-collection system.

Stands: Stands are an absolute must for big saws, and helpful even for small models. When shopping for a stand, also consider the advantages of adding a mobile base beneath it.