6 in. Live Poinsettia (In-Store Only) 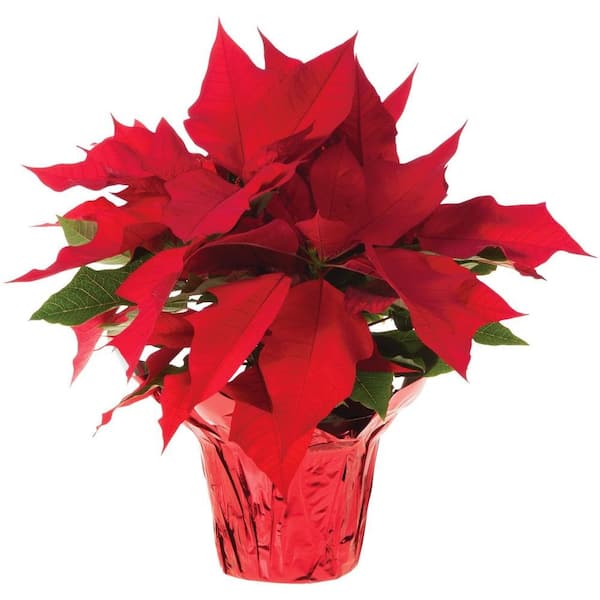 Poinsettias are traditional Christmas flowering plants that will last throughout the Christmas season. They have long-lasting flowers, and Poinsettia bracts remain showy for several months. To ensure growth beyond the Christmas season, cut back the plant in February or early March. Cutting back the plant will cause the buds to grow and develop. Fertilize every two weeks and water only when dry for maximum growth.

3
Filter by:
Showing 1-8 of 8 reviews
Nov 26, 2020
6 in. live poinsettia
My poinsettia stay good for whole year. I buy 12 each year, and 2-3 plants stay good until next thanksgiving. Very good deal but you have to go 5:30 am to get 99 cent deal.
by
Feb 24, 2020
Beautiful plant and strong grower but fungus flies love the soil
We've purchased 6" poinsettias from Home Depot in past years and have been very happy with the plants, even into the summer. The plants this year looked great as well. One died off early but the remaining eight appeared to be just fine. In early January we started noticing small black flies in the house, which we believe are fungus flies. They were coming from, and thriving in the plant's growing media. The plants were not being over watered. Our other house plants did not have this problem, which surprised us thinking that the flies would take to their soil as well. After unsuccessfully trying to kill the flies with Mosquito Bits, we moved the plants outdoors. This quickly resolved the fly issue, but the plants won't be here this summer for sure. Also, we purchased one for a family member as well, and gave it to her soon after purchase. She had flies too. I suggest that you ask your local grower, Bell Nursery Stevensburg, Va, to use soil that's less prone to these pests.
by
Nov 28, 2019
I bought three of these 2 years ago black friday at $1 each. I expected them to last till Christ...
I bought three of these 2 years ago black friday at $1 each. I expected them to last till Christmas, two lasted well into the new year. One of them is still alive and kicking. After 1 year we transplanted it to a larger, nice pot an it is still going. Great plants. Will buy more.
by
Nov 18, 2018
99c black friday
My plants last well into new year. Cant beat the 99c price. Only the original price tag is on the red foil that won't come off. Keep them at 99c and you will keep me returning black Friday
by
Nov 25, 2017
Ugly price sticker won’t come off
These plants are lovely however they are ruined by the large price sticker that does not peel off which is attached to the red foil! For goodness sake put the price sticker on the clear wrap...
by
3 people found this helpful
Nov 24, 2017
$0.99 Black Friday scam
Kind of amazing that they run a Black Friday special on 6" pointsettas for $0.99 and when you go to check out with the 6" pointsettas they ring up at $4.98 each? Really... as the excuse they give you is they are out? Kind of find that hard to believe as I had 6 of them in my cart. Deceptive Big Box Store practices luring consumers in.
by
6 people found this helpful
Nov 22, 2017
broken branches and bent flowers. The poinsettia I got died in 5 days
broken branches and bent flowers. The poinsettia I got died in 5 days
by
2 people found this helpful
Nov 13, 2017
died
Died two days later after buying for my mother-in-law who is in a memory care unit she was very disappointed
by
1 person found this helpful
Showing 1-8 of 8 reviews