150 lbs. Tow Behind Spreader with Auto-Stop 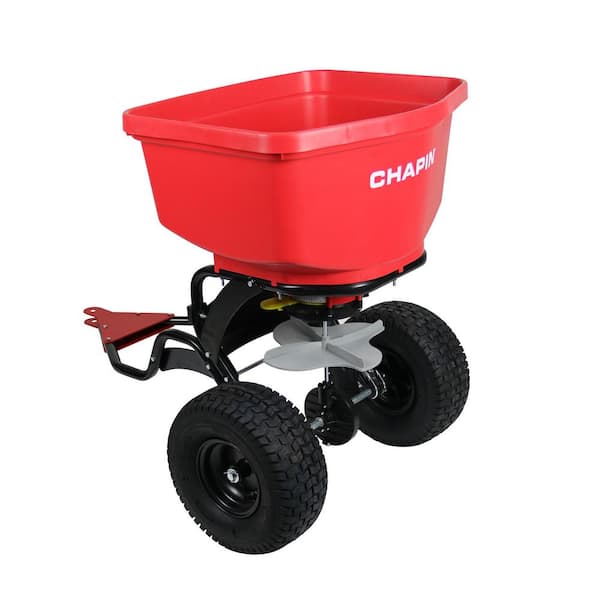 No more reaching back for levers and controls to stop seed and fertilizers from spilling off the impeller when you stop. Chapin unique dual impeller design allows material to spread when spreader and vehicle are in motion. When you stop moving, its stops spreading. No more burnt lawns and wasted product.

150 lbs. Tow Behind Spreader with Auto-Stop

14
Filter by:
Showing 1-10 of 113 reviews
Apr 10, 2021
Tips over too easy on the slightest incline
Great seeder compared to the rest but the axle width needs to be extended to give it more stability when half-full of heavy fertilizer and used on the slightest incline. This thing started falling over when I turned around at a slow speed on level ground. Twisted the top hitch plate to a 90 degree angle on the hitch pin. Bought it from a guy in the box that had two and he warned me that they will tip over was his only complaint. Talk about burning your lawn!
by scoham

Customer review from chapinmfg.com
Oct 30, 2020
N
I bought this last summer and only got to use it once last summer but used it twice this summer. From right out of the brand-new box it was very stiff to make it rotate to throw out the fertilizer. I thought it would loosen up over time but it didn't. When the hopper got low like half a sack of fertilizer it would just drag the drive wheel. I thought initially it would be the little transmission but it wasn't the friction occurred just above the impeller that slings the material around the yard. Taking it apart I could see no way to get the pieces apart that you see in the picture to try to solve the problem. If it had worked properly I would've liked this spreader but as it is I certainly can't recommend it. I'm going to call tomorrow and see if the parts are available and if the cost doesn't exceed the practicality of fixing it. So if you happen to buy one and it seems stiff in terms of getting the rotor to sling the material send it back immediately.
by Allen
Response from Chapin Customer ServiceOct 30, 2020
Hi, we are sorry you have experienced a problem with your 8620B 150-Pound Tow Behind Spreader. If you give Chapin Customer Service a call at 800-444-3140 and reference this review, they will assist you with troubleshooting your spreader to get this issue resolved. If necessary, replacement parts can be expedited to you depending on the outcome of the troubleshooting. Thank you for your comments and for your business, we appreciate it.

Customer review from chapinmfg.com
Jul 2, 2021
Five stars rating it is as good as gold....
Five stars rating it is as good as gold.
by HomeDepotCustomer
Jul 1, 2021
Great, in theory.
This is a nice spreader at first glance, but doesn't work well in real life. I've now used it twice, with a full cleaning in-between, and have been completely frustrated. Several things: 1. When full, it is heavy enough to turn the tires, which turns the spinner and lets fertilizer out to be thrown. When going fast, I suppose it can throw a fairly wide path -- maybe 6-8 feet, to allow feathered, overlapping rows . But at a more prudent, moderate speed, the path is about 5 feet wide, with more of a stripe pattern. Not a deal breaker, but it would be great if it was geared up to spread widely at a slower speed -- say a normal grass-cutting speed. 2. At under about 2/3d full, the wheels will start sliding rather than turning, meaning no spreading. This result applies regardless of tire pressure. Maybe if the tires had knobby treads, or an "ag tire" tread, it would bite into the grass/ground better, but the lightly treaded tires just won't turn. I've been trying to figure out a way to hang more weights on it, but it would need about 2 cement blocks worth of weight to make a difference -- and I haven't figured out how to do that. Maybe there's a way to fill the tires with liquid (like tractor tires) for traction, but again, I haven't figured out how to do that either. 3. It is quite top-heavy when full, with a fairly narrow wheelbase. Thus, pulling on any slope over about 5% (or even U-turning to go up/down a slope), will result in the spreader tipping over. I am trying to figure out how to add wheelbase extensions, but no obvious solution yet. Also, because the right wheel turns the spreader mechanism, if the right wheel is on the "high side" of the slope it will lose traction even at/above 2/3 full. 4. That said, it does clean easily, and seems to be made of sturdy plastic. The cover has an elastic strap that will keep fertilizer in the hopper (or at least off the ground) if it tries to flip over on a hill (ultimately the hitch plate will stop the complete turning over, but at the price of bending those pieces).
by Eston

Make the most of your mower with an Agri-FabMake the most of your mower with an Agri-Fab 185 lbs. tow spreader. The 185 lb. spreader can cut down on the number of passes necessary to fully cover your lawn due to its wide distribution pattern of up to 12 ft. Because of its random distribution pattern, over-fertilizing and under-fertilizing are reduced. The large poly hopper and spreader plate resist corrosion. This spreader has a coverage area of up to approximately 40,000 sq. ft., roughly 1 acre.See Full Product Description

The Agri-Fab 110 lb. tow spreader is a goodThe Agri-Fab 110 lb. tow spreader is a good choice when you need to start, re-start or weed and feed your lawn, spread everything from fertilizer to seed to ice melt with this spreader. Solid construction and reliable design ensure even and continuous flow and spread of materials, eliminating streaks. Its large 10 ft. spread covers approximately 17,500 sq. ft., so you can cover more ground in much less time quickly and efficiently. The hopper is constructed of heavy-duty polyethylene for rust- and corrosion-resistant performance in all weather. Its heavy-duty steel tubular frame can handle years of use. And with its at-your-reach flow control, you can adjust flow from the reach and comforts of your tractor seat. Boasting a universal design, this seed and fertilizer spreader conveniently fits all brands of riding lawn tractors. Its large, 10 in. tires provide sure-grip traction and smooth-rolling maneuverability. With a weight of only 30 lbs. the spreader delivers no-hassle storage in your shed or garage, as well as exceptional portability and maneuverability.See Full Product Description

Chapin Professional Spreaders were builtChapin Professional Spreaders were built to provide all of the features and functionality needed for reliable, efficient performance. The 100 lbs. Salt and Ice Melt Spreader has a large, 2-piece hopper design that boasts stainless steel handles and a rugged stainless steel frame, solid linkage for full gate control, spiked auger to help move salt and tear through clumps, 14 in. pneumatic tires for just about any terrain, front and side baffle system for precise control of spread pattern and enclosed metal gears with grease fitting to withstand the elements. Protective rain/snow cover included.See Full Product Description

Chapin professional spreaders were builtChapin professional spreaders were built to provide all of The features and functionality needed for reliable, efficient performance. The 82400B 100 lbs. professional salt spreader has a large 1-piece poly Hopper, a rugged stainless steel frame, Solid linkage for full gate control, a stainless guillotine Style gate designed to cut through clumps of rock salt, a spiked auger to minimize clumping and improve product flow, enclosed metal gears with grease fitting, front and side baffle system for edge control and 14 in. Pneumatic tires to cover just about any terrain. Snow/rain cover is also included.See Full Product Description