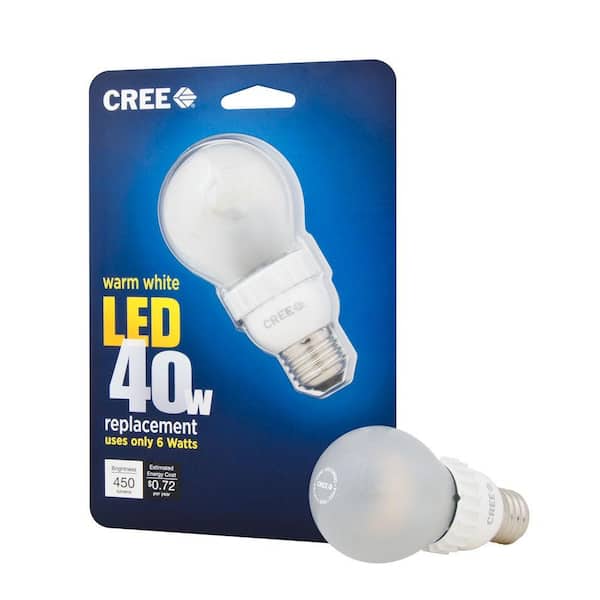 Cree (R) LED bulbs look and light like the incandescent bulbs you love, and are affordably priced. Backed by our 10-year warranty, Cree LED bulbs shine brightly while using at least 84% less energy and are designed to deliver up to 25,000 hours of light for your home. The perfect replacement for incandescent at a price you can afford, Cree LED bulbs pay for themselves quickly and then pay you year after year.

3
Filter by:
Showing 1-6 of 6 reviews
Jun 21, 2016
Bulbs do not last?
Purchased 5 of these 18 months ago and three have already failed. 10 year warrantee not worth it when you have to mail them back. There are better options out there do not waste your money on these
by will
Response from Customer ServiceJun 27, 2016
Your feedback is very important to us, and we want to ensure that you will trust our products with full confidence in the future. A customer service representative will be reaching out to you on behalf of Cree at the email address you provided.

Customer review from creebulb.com
Mar 30, 2015
bad bulb
I bought 6 bulbs about six months ago one has already burned out warranty states 10 years who keeps a receipt for ten years I don't even have mine after about six months have to wait to see how the other 5 bulbs do
by paul72
Response from Customer ServiceApr 6, 2015
Your feedback is very important to us, and we want to ensure that you will trust our products with full confidence in the future. A customer service representative will be reaching out to you on behalf of Cree at the email address you provided.

Customer review from creebulb.com
Jan 29, 2015
New to Cree products
These LED bulbs are amazing! We purchased 40 & 60 watt replacement soft white bulbs for all of our ceiling fans. We are very satisfied with the results of Cree bulbs and will look into other LED bulbs for other applications around the home for all our needs.
by Handymanchris

Customer review from creebulb.com
Nov 3, 2013
Not compatible with Lutron dimmers
Bought a bunch of these based on the ability to used them with a dimmer. Immediately had an issue with humming on any Lutron dimmers - even though both Cree and Lutron's websites said they were compatible. Talked to Cree, who knew nothing about it, but who said to return them and they would look at them to figure it out. Then I talked to Lutron, who said that Cree had changed something since Lutron had originally tested them, and the newer BA19 bulbs were all humming on any Lutron dimmers (this was so new to Lutron that the bulbs were still listed as compatible. Returned them to HD, no issues. They'd be fine in a non-dimmed situation, but as has been stated before, that's now why I bought them!
by Connman

Nov 1, 2013
Good Bulb With a Few Defects
This bulb is the best of the LED bulbs I've tried. The two things that detract are: (1) The bulb is really bright at the midpoint of the bulb. If the bright point is below the diffuser on your fixture, it may not be comfortable. (2) The bulb has a dead spot on the top which is apparent. If the bulb is covered by the light diffuser/fixture, it is probably the best on the market. I don't know if it is rated for a fully enclosed fixture, that info is not on the packaging and I couldn't find it on the CREE website.
by chipmunkheadache