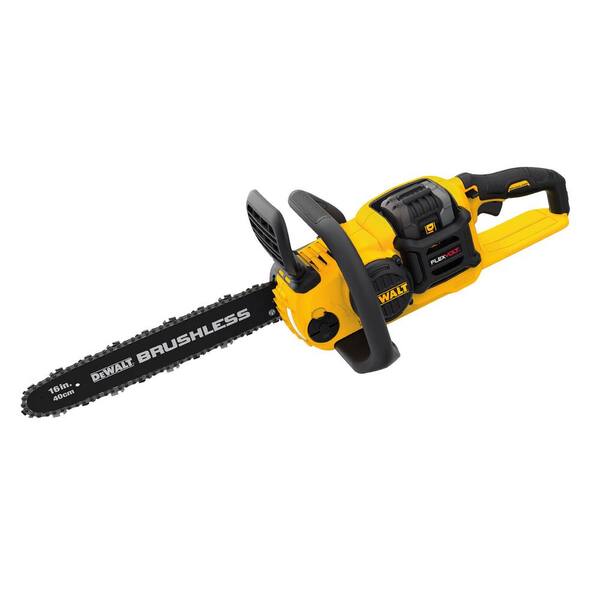 The DEWALT 60-Volt MAX Chainsaw features a low kick back 16 in. Oregon (R); Bar and Chain for both construction and outdoor cutting applications. Its tool-free chain tensioning and bar tightening knob enable proper bar clamping force, and it features auto-oiling for continuous lubrication. It has a 60-Volt MAX FLEXVOLT battery that powers 60-Volt MAX tools or it can be backwards compatible to work with 20-Volt MAX tools.

58
Filter by:
Showing 1-30 of 766 reviews
Mar 17, 2021
Sparks started flying from motor after using it for 30...
Sparks started flying from motor after using it for 30 mins will be returning Other than burning out I really liked it cuts like butter but defect motor sparks . Other reviews mentioned the motor having sparks coming out .... so has a defect for sure
by
Oct 27, 2020
Incredible
So I bought this about a month ago to clean up a few trees that had been cut down at a property I recently purchased. I headed up to the hills last weekend brought a quart of oil and 5 batteries. I got started on the small trees and was blown away. This thing eats wood for lunch. I then wondered if it could handle the larger trees. I chewed through those as well. I went through three batteries and and about half a quart of oil. I took care of all four trees. I thought this chore was going to take me more than one weekend. I stayed at it for most of the day and knocked it out. This is the best tool purchase I have made in awhile. I just couldn’t believe how lite the chainsaw as and how well it performed. Five star!!
by

Customer review from dewalt.com
Sep 3, 2020
Short Work Chainsaw
This saw is powerful, but I have had to return 2 of them. The first saw was running good for about 2 or 3 hours of cutting down saplings. Then the chain started flying off the bar. The bolt and washer that keeps the chain from coming off fell out while cutting. The 2nd one I bought was just as powerful as the first. Up in New York preparing for winter I got about 20 hours of cutting up logs for splitting before going down to Kentucky to clear a tree stuck between oil tanks. Cut the tree down and cut it into 3 pieces when the motor made a weird noise and a cloud of smoke came out of it. The chainsaw stopped working after that. I would recommend this to any and everyone 13 or older male, female, or what ever you call yourselves. Quick and easy to use. The average person won't be able to run this saw as hard as I did. I have 8 flexvolt batteries and have converted completely to the Flexvolt line.
by
4 people found this helpful
Jun 3, 2020
My BEST Chainsaw
[This review was collected as part of a promotion.] When I purchased my DeWalt Flexvolt chainsaw almost a year ago now, I had previously been using 1 of 2 small 16" bar gasoline powered chainsaws. These were both identical saw except that one was several years older than the other one. The reason that I owned 2 identical chainsaws was that both saws were hard starting if sitting around for months at a time. These saws were NOT cheap off brand chainsaws. They are of probably the most popular brand that gasoline powered chain saws come from. So I had been trying to keep one of these saws working while the other was in the shop under repair, usually carburetor work. I am retired now and I am caretaker for a hunting "crew" from out of state.There are about 1,000 acres that I manage for these elite gentleman. I need a chainsaw that is quick starting but MOST of all reliable with little maintenance required.This DeWalt cordless electric chainsaw is the absolute answer for driving my 4-wheeler along the many miles of trails in these woods, clearing away fallen branches, dead fall trees etc. Gone now are the days of driving short distances, getting off my wheeler, having to start up a gasoline saw, cut for a few seconds, then shut it off and drive down around the next bend and do that all over again! Now with my Flexvolt, I just hop off the wheeler, push the button, cut, and be on my way. Also I have had several open area clearing projects with it. The first time that I used my DeWalt for that, I thought that I might need a backup,(I didn't know how long the battery would last) so I put both gasoline saws in my small trailer. Each time I ran my DeWalt for about an hour clearing 6 inch tress and small brush. I have run the battery down after over an hour of cutting, but never had the saw quit working. That might be because unlike a gasoline saw, the DeWalt is not using up power between trigger activation. Occasionally I would glance into my trailer and notice the 2 saws and remember how their chains would loosen, and then with small brush pop off. The automatic chain tension on the DeWalt cured THAT problem. The chain never came off once! After that first clearing escapade, I had more room in my trailer, because NEITHER of those gas saws were there anymore taking up room! lol
by

Customer review from dewalt.com
Jun 3, 2020
The perfect all around chainsaw
[This review was collected as part of a promotion.] I bought this saw to keep the tree's trimmed around my vacation rentals. The power and ease of use are amazing! It's a huge timesaver not having to mix oil and gas without sacrificing power. I also love the tool free chain tensioner and the remarkable battery life the 60 volt battery pack has. If your looking for a great all around chainsaw this is it!
by

Customer review from dewalt.com
Aug 5, 2019
Exceeded Expectations.
I read as many reviews as I could find. Developed my expectations and purchased the FLEXVOLT 60V Max for some clearing work that needed to be done on one of my properties. I've done a bit of work with my gas saw, but was getting tired of re-starting every time I needed to put it down. I'm not Paul Bunyan by any means, but I have work to do and this saw exceeded my expectations. From the reviews, there were some concerns about power, bogging or battery life. The images below are from this saw's first test and I experienced nothing but great performance. From the Images, you'll see good chips, 22" diameter cut and when finished had 2 bars of power left. I actually did some other cutting before checking the battery. What's that? You say the oil cap leaks or is too hard to fill? Use bar chain oil, it's got stuff in it to make it sticky, I experienced no leaking yet. Although, the saw does go through a bit of oil when in use. Keep some extra on hand. I just use standard hardware store issue bar chain oil, you can spend more for the fancy stuff. Buy a one dollar funnel (see photos). What's that? You say you chain went dull right away? Simple, keep it out of the dirt. It's an Oregon bar and chain. Good stuff. Notice the nice chips I made. I did this in three cuts. I was cutting white pine, so it's pretty soft, but big enough for a good test. I don't recommend cutting this diameter in, say, red oak. Your results may vary. I had good chain speed and the tool cut smoothly and quickly. I ran it up a bit when I first got it to make sure the chain is properly broken in and stretched. There was no problem with chain tension during the work. Actually, there were no problems at all. Good stuff DeWALT. Another good product experience.
by

Customer review from dewalt.com
Jun 27, 2019
Gas tuff
[This review was collected as part of a promotion.] As a first responder I needed something to help clear roadway for other rescue crews quickly. I’ve cut through a telephone pole and two oak trees with no issues. Thankfully it’s something I can stow in my patrol car without carrying a large gas can around. I already own many already reliable DeWalt products and having batteries which I can interchange is amazing. This is a must have especially as the storm season approaches.
by

Customer review from dewalt.com
Jun 26, 2019
No Exhaust
[This review was collected as part of a promotion.] The only complaint is that I need a pole saw too, I have waited a year. I will eventually have to invest in another battery platform if DeWalt does not make a pole saw.
by

Customer review from dewalt.com
Jun 2, 2019
Fatal flaw
Great saw and I love it, but it has a fatal flaw that shortens chain life and creates extra maintenance cost. The chain oiler is recessed and collects sawdust that is hard to wipe off without getting saw dust in the oil reservoir. I see this as eventually clogging the auto chain oiler, damaging the chan and requiring a new chain and the auto oiler to be cleaned out or repaired.
by

The Milwaukee M18 FUEL 16 in. cordless chainsawThe Milwaukee M18 FUEL 16 in. cordless chainsaw delivers the power to cut hardwoods, cuts faster than gas-powered models and delivers up to 150 cuts per charge. The battery powered chainsaw is designed to meet the performance, durability and ergonomic needs of professional landscape maintenance, power utility and the installed M18 users. M18 FUEL technology allows the unit to reach full throttle in under 1 second providing the ultimate control and productivity. The POWERSTATE Brushless Motor was purposely built for the M18 FUEL 16 in. Chainsaw to provide the power and performance of a gas engine up to 40 cc. Built-in REDLINK PLUS Intelligence ensures optimal tool performance and provides overload protection to prevent damage to the tool and battery during heavy applications while still maintaining compatibility across the entire M18 System. The REDLITHIUM High Output HD12.0 Battery Pack provides 50% more power and runs 50% cooler versus standard REDLITHIUM HD packs. Superior pack construction provides the industry's best protection against jobsite weather and environmental conditions. In addition to the chainsaw, this kit comes with one M18 REDLITHIUM High Output HD12.0 battery pack (48-11-1812), one M18/M12 multi-volt rapid charger (48-59-1808), one 16 in. Oregon bar and chain and 1 scrench.See Full Product Description

Tackle your construction or outdoor cuttingTackle your construction or outdoor cutting applications with this DEWALT 60-Volt MAX Chainsaw. It features a low kick back 16 in. Oregon, bar and chain for versatility. Delivering up to 70 cuts a charge, a 60-Volt MAX FLEXVOLT battery powers this chainsaw and is compatible with other 20-Volt MAX tools. This reliable chainsaw’s tool-free chain tensioning and tightening knob enable proper bar clamping force. It features auto-oiling for continuous lubrication.See Full Product Description