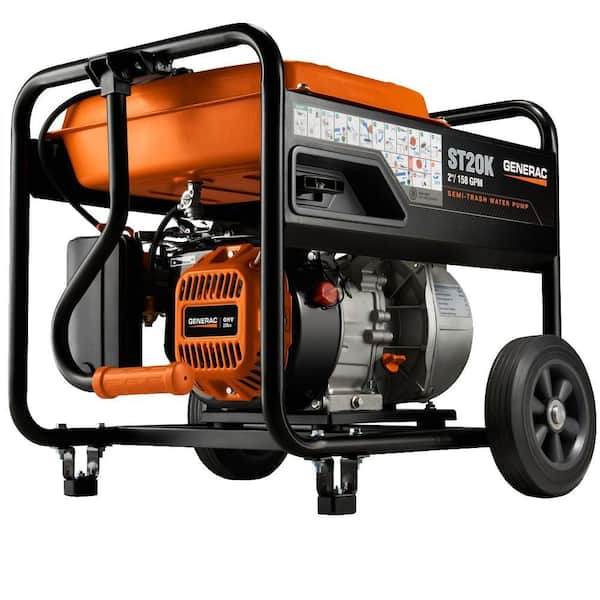 Specifically engineered to handle muddy or sandy water, the ST20K is powered by a 208cc Generac engine that pumps up to 158 GPM. So it's ideal your toughest applications. With features such as low-oil shut down to protect the engine from damage, it's both durable and easy to use.

6
Filter by:
Showing 1-10 of 35 reviews
Sep 17, 2015
"Easy start, good suction, sturdy and reliable"
All the added parts were in the container and were very easy to unpack. The wheel and the handle are very easy to assemble and it is nice to see that they included a special funnel for the oil fill. The suction hose unraveled to a straight line without issues (I have had some in the past from other manufacturers that cracked during unwrapping and trying to straighten it out) The supplied instructions are precise and accurate and I would conclude that they are one of the better ones I have seen from a dozen water pumps I have set up in the past. The pump, once ready to use is very stable as I wheeled it up an incline of 250 feet of a rough dirt track with plenty of large holes in it without any problem. The folding handle worked well. Put the suction hose down the 12 foot well with the pump on the side of the hole and it was all ready to go. Total time was one hour from opening the box to getting ready to use it. I tested the pump first on my pond and all worked very good )see photos) The primer has a big cap which I find is a bonus. I filled the primer once, put 3 gallons of gas in the steel tank, (again, nice to see it’s not plastic) topped up the oil, and it started after three pulls. The throttle is exceptionally effective with a nice easy to get at lever. The water it was pulling up contains a lot of mud and sand but had no problems pumping up and pushing it down a slight incline of 200 feet to fill up my water tank with a thousand gallons in less than ten minutes at half throttle. Although we only use the tank water for showers, washing dishes, etc., the strainer works well enough to provide enough clean and clear water to go through our other filters without clogging them up. I have had this pump working now for six weeks and every single day other than the first day when it took three pulls to start it, it has started on the first pull with the pump working flawlessly. The noise it makes with its 208cc OHV engine, I would rate as the same as a small gas grass mower, perhaps a little less. I had easily connected my own hose to the discharge hose using the supplied hose clamp assembly, although to add to that, the supplied clamp assembly is not a standard size (IE ¼” or 5/16”. But thankfully it least it is a Philips head. With using the pump motor for six weeks for about ten minutes each day I have only topped the tank up once and so the five hour run time on a full tank as stated by the manufacturer seems pretty accurate. The oil was only very slightly down, but not enough to add anymore as yet. I find this pump and the housing very well made and thought out enough to be extremely user friendly
by Palaranda

50 people found this helpful
Jun 12, 2021
Cheap connectors
The hoses and connectors are junk. Threw them out. Do yourself a favor and but new quality lines and add GatorLock® banjo couplers to pump and hoses. no more leaks. easy connect/disconnect. Love the unit now... I like the unit and it works great. It would have been 5 stars if the had not gone with such low quality hoses and connectors.
by Shockwave
Response from MarketingJun 14, 2021
Thank you for taking time out of your day to provide us with your valuable feedback. If you run into any questions, please give us a call at 888-436-3722!

Oct 4, 2020
flimsy
I would have rated this item higher if it werent for the flimsy rubber pads that broke on start up as well as the flimsy cover on the trash hose.
by JoeI
Response from GeneracOct 5, 2020
Thank you for the rating, we appreciate your feedback. If you have any questions, please do not hesitate to contact our customer support team at 888-GENERAC (436-3722).

Customer review from homedepot.ca
Sep 26, 2020
One minor flaw
Bought it a few months ago, got around to trying it today to drain my daughter's above ground pool. When installing the supplied output hose together with the supplied fitting to attach it to the pump's output fitting I was a little disappointed in how small the nipple was in comparison to the hose. When I tightened the hose clamp down on it the hose puckered because of the loose fit. That caused the hose to leak significantly through the puckers. I had to buy a fitting for the other end of the hose (that would connect to more hoses) and the aftermarket nipple was quite a snug fit. Fixing the leaky connection wasn't a hard fix, I just took the assembly apart and wrapped the nipple with enough duct tape to make a snug fit that didn't leak. I just feel this is an issue that Generac should have fixed before putting the pump on the market. The pump was fairly easy to start, ran smoothly and reasonably quiet, and it emptied a 7000 gallon pool in 45 minutes under ideal conditions, i.e. 25' of open ended hose on flat ground.
by Chuck
Response from MarketingSep 28, 2020
Thank you for the rating, we appreciate your feedback. If you have any questions, please do not hesitate to contact our customer support team at 888-GENERAC (436-3722).

Customer review from generac.com
Sep 24, 2020
This pump works great and does the job consistently.
Our Church brought this pump about 5 yrs ago and it is a work horse.
by Gaf
Response from MarketingSep 25, 2020
Thank you for the rating, we appreciate your feedback. If you have any questions, please do not hesitate to contact our customer support team at 888-GENERAC (436-3722).

Jun 22, 2020
Generac semi-trash pump lacking in quality
The name Generac should be equated to quality, but in this case it is not! This made in China semi trash pump is measurably low in quality. The motor is sub-standard and no-name and tends to use oil, the fuel tank gauge quit working after the first year, and the chain holding the prime pump fill cap rotted out in the first month of service. The purchase price of the Generac is not that much lower than some other name brands which are of much higher quality. Generac really missed the mark on this product, hopefully they have not done the same on their other products.
by K
Response from MarketingJun 23, 2020
Thank you for the review, we appreciate your feedback. We recommend contacting our customer support team at 888-436-3722 as they will be better able to assist you.