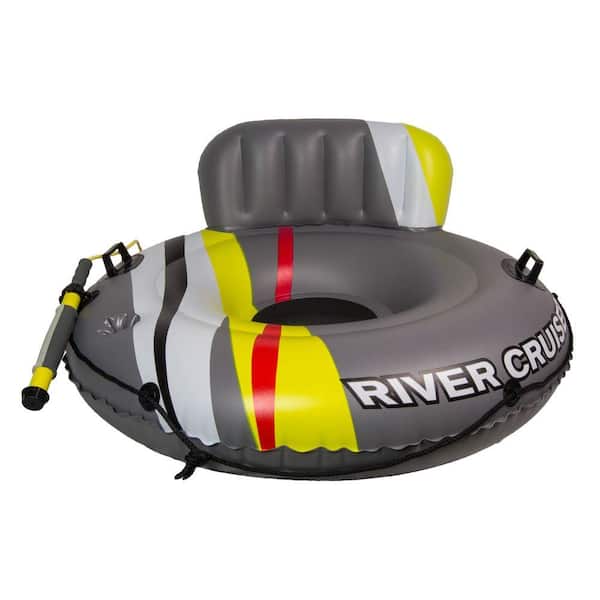 If you're looking for wet in wild fun on the river or lake, Pool master's River Cruiser Lounge is ready for action. The River Cruiser Lounge includes a pump-n-squirt water launcher with an auto-fill water line so you never have to stop for a refill. With each pump, water is pulled through the tubing providing a consistent flow of water with a stream that shoots over 35 ft. The side holster is permanently bonded and conveniently located for you to grab and shoot at a moments notice. Enjoy dueling with friends and family. The River Cruiser Lounge is constructed with on-the-water safety in mind. 2 inflatable air chambers are built into the main seat, with an additional air chamber in the backrest. The large 47 in. Dia profile with oversize back rest supports all body sizes and a built-in center mesh seat is added for all-day sitting comfort. The River Cruiser Lounge features a perimeter rope for tethering as needed or for light towing and two permanently-bonded handles are added for grabbing convenience. A beverage pocket is built-in to enjoy your favorite refreshment between water duels. Constructed in extra-strength 22-Gauge vinyl, the River Cruiser Lounge is built for rough water play and season-after-season longevity. Recommended for adults.

Jun 24, 2021
Liked how the tube keeps your butt out of the...
Liked how the tube keeps your butt out of the water when floating. The water toy is fun, but the strap that secures it is poorly designed. Otherwise 5 stars
by
Apr 21, 2020
Float appears heavy duty and well made. However, it’s still...
Float appears heavy duty and well made. However, it’s still too cold around here to actually try it out.
by
Aug 2, 2016
Tons of Fun!
This is a VERY nice raft. It's made out of nice, heavy rubber and the handles are very well made and sturdy. It's plenty big for me, a 6' tall guy and it's comfortable enough to stay in for a nice long afternoon. The best part though? It comes with a water sprayer. While all of your friends are floating on their regular old tubes you can have the fun on spraying them down. I'd definitely recommend this if you're in the market for new fun ways to relax on the river/lake/creek/pond
by
1 found this review helpful
May 17, 2016
comfortable
This is a perfect inflatable lounge chair for an adult to cruise on a river or lake. The water launcher thing doesn't work as well as we had hoped, but we mostly appreciate the thick grade plastic and 3 air chambers that inflate for a comfortable relaxing experience. I wish it came with its own little air pump, but we have an electric one, so that made it easier to inflate.
by
1 found this review helpful
Apr 11, 2016
Fun in the sun!
I took this on vacation and had a blast. The water cannon feature on this is what makes it. Our kids were fighting over who would get to sit in the raft. This will turn any boring pool party into an adventure. This will be great to use in our pool once the weather breaks. We may have to buy another one so each of our boys can have one in the pool to make it a fair fight!
by
1 found this review helpful
Apr 3, 2016
Very cool water tube!
I got this on a lark, thinking I might be useful for fishing rather than shooting water. I had to wait until the water unfroze to try it out. It's very sturdy and stable. Although I would not recommend it for most of our rivers here, it was fine for the lake. It would be fun in the ocean or in a large pool or in a mild, non-rocky river. It was stable enough for me to fish from, but I needed a paddle to get back to shore.
by
1 found this review helpful
Showing 1-10 of 10 reviews

Whether you're lounging on the lake or floatingWhether you're lounging on the lake or floating down the river, Pool master's River Cruiser Tube provides the security and all-day comfort you need. The River Cruiser Tube is constructed with on-the-water safety in mind, with two inflatable air chambers (perimeter and interior) within the seat. The large 47 in. Dia profile supports all body sizes and a 13 in. Dia center opening allows for support and comfort sitting. The River Cruiser Tube features a perimeter rope for tethering as needed or for light towing and two permanently-bonded handles are added for grabbing convenience. A beverage pocket is built-in to enjoy your favorite refreshment. Constructed in extra-strength 22-Gauge vinyl, the River Cruiser Tube is built for rough water play and season-after-season longevity. Recommended for adults.View Full Product Description

The pack of 4 Intex Mega Chill Pool InflatableThe pack of 4 Intex Mega Chill Pool Inflatable Floating 24 Beverage Cooler Holder is made with high-grade vinyl with 3 air chambers and a repair patch for easy maintenance. It features 2 sturdy handles for support and 5 cup-holders for convenience. With its well-balanced design and large capacity, this beverage cooler securely holds 24 cans and ice so that you can enjoy your favorite drinks in the pool.View Full Product Description

The Intex Inflatable Rockin' Lounge PoolThe Intex Inflatable Rockin' Lounge Pool Floating Raft Chair provides a soothing feel and a relaxed experience. Its curve-shaped design allows back-and-forth rocking for playful entertainment. This raft chair comes with a built-in cup holder for convenience. It is perfect for lounging in the pool or by the riverside/lakeside.View Full Product Description

Enjoy a relaxing time in the pool with theEnjoy a relaxing time in the pool with the Intex Inflatable Mega Chill II 72 Can Cooler Float and Inflatable Lounge Tube. Both the cooler and the lounge are made of high-grade vinyl with a repair patch included for easy maintenance. The cooler float features 4 sturdy handles and can be connected to other floats or rafts for convenience and secure handling. The lounge float is designed with a backrest, an all-around grab rope, and a mesh bottom so you can stay comfortable, safe, and cool in the water. With their sturdy design and easy to inflate mechanism, this cooler float and lounge float Pack is the perfect addition to your Summer vacation kit.View Full Product Description