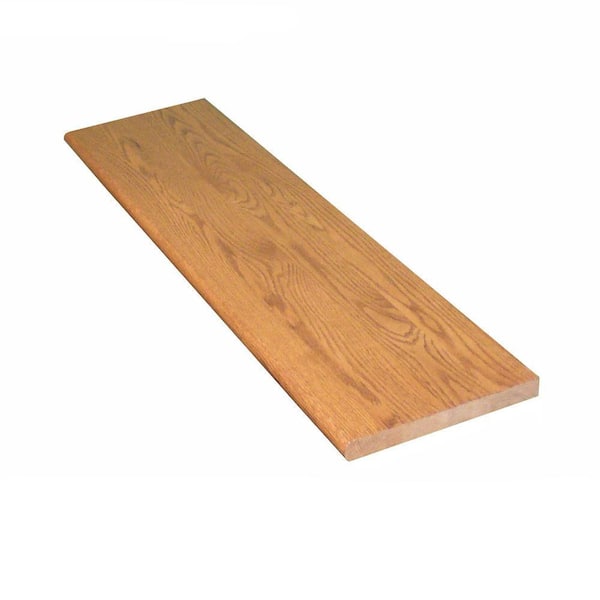 The Stairtek 42 in. x 11-1/2 in. Gunstock Red Oak Tread stands up to foot traffic and is designed to last. It offers a warm, semi-gloss natural wood finish and is recommended for interior use. Coordinates with matching riser to give your stairway a rich new look.

0
Filter by:
Showing 1-10 of 11 reviews
Oct 31, 2012
Excellent grain, looks great!
This is the second set of stairs I have installed with this product. Excellent product both times. It really holds a beautiful grain when stained.
by
May 29, 2012
Quality Control Issues! I see no valid excuse to send this product out in this condition
During a home improvement project, I was removing old carpeted pine steps and replacing them with Oak Treads. I ordered these, as I figured I could save some time, not having to finish them. The finish was great, however, in the first set of 6 I ordered, 2 were split. I was having to cut them to size, and one's split was only on the end, and I was able to cut that off. I returned one, and ordered a replacement. That one came, and was also split. Unfortunately, this one was split about halfway down the front of the tread. I had a party that weekend, and couldnt wait to have another shipped, so I cut and used that tread (installed temporarily). A week later, I ordered a replacement, but when it came, I had moved on to the next part of the home improvement project, and set the tread aside. My Bad, but almost two years later (big project) I decide to install the last step, open the box the tread came in, and guess what? Split 3/4 of the way down the middle of the tread!! How does this get shrink wrapped and boxed, without anyone catching that. I didn't even have to remove it from the box to see it was unusable. Definitely not recommended.
by
Mar 6, 2021
Rating provided by a verified purchaser...
Rating provided by a verified purchaser
by
Jul 22, 2020
Rating provided by a verified purchaser...
Rating provided by a verified purchaser
by
Apr 2, 2019
It was easy to install and looks great....
It was easy to install and looks great.
by
Feb 28, 2019
4 Star Review
Rating provided by a verified purchaser
by
Jan 29, 2019
High quality finish...
High quality finish
by
Jan 16, 2018
Great product will use again...
Great product will use again
by
Feb 26, 2015
New steps
The treads that we got worked perfectly. All we had to do was cut them to lenght. Great product. Thank you
by
Nov 11, 2014
looks great
Pleasantly surprised on how well steps matched the floors
by
Showing 1-10 of 11 reviews