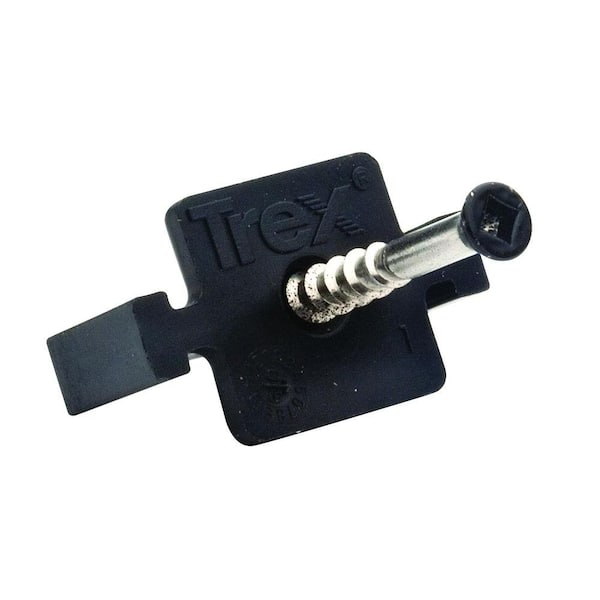 Like what you don't see, Trex Hideaway Universal Hidden Fasteners are sub surface clips that install grooved deck boards without deck screws, leaving on a smooth, unlettered finish behind. Now comes in a combo pack with start clips included.

Can these fasteners be used with trex elevations steel f

Thank you for choosing Trex. The regular Hidden Fasteners can not be used with Elevations, you will need to get the Hidden Fastener specially for Elevations or a steel substructure. If you have any further questions, please feel free to contact us Monday through Friday 8am-5pm EST at 1-800-289-8739. Erin, Trex Customer Care

Greetings. Is it normal that the start clips don’t hold decking boards down firmly? I am install...

Dear Gary: We also ran into problems with these plastic Trex fasteners. We switched to stainless steel FastenMaster clips, which include 'starter' clips for edge boards. See: FastenMaster Model #FMTHDCLIP-200, Home Depot Internet #312936835, UPC Code #608309444169, Store SKU #1005403573 A tip for 'pro' level decking: 'Picture frame' your deck with two courses of boards that run parallel with the perimeter. This improves the appearance and eliminates the small ends on two sides. You can also install a slightly different (typically darker) color around the perimeter. This does require installing 'ladder blocking' on the sides where the joists are parallel, every 16 inches or more. We also install 'skirt' boards around the sides, on the rim joists -- using FastenMaster Cortex hidden screws and caps. Caps are available for almost all types of decking. Home Depot carries these too. Finally, did you check your deck for safety, before you installed the decking? Every deck I have inspected had at least one serious problem -- often two or more, e.g. joists bolted to the sides of posts, no tension ties to hold the deck to the house, no tension ties on the guardrail posts, etc. etc. Do a Web search for "Top Ten Deck Building Mistakes" from FineHomeBuilding, the "Prescriptive Residential Wood Deck Construction Guide" from the American Wood Council, and "deck tension ties" from Simpson. Note that there are two types of lateral tension ties for the ledger board / house connection, and twice as many are required if you use the easier-to-install version that uses a screw into the rim joist of the house. The version that uses a threaded bolt through to brackets on both sides is significantly stronger. I hope this is helpful, Mark

Thank for choosing Trex. We do recommend that our products be installed according to the directions & recommendations in our installation guide to insure the best performance of our products. Anything outside of these recommendations could affect your warranty. If you would like to discuss this further, please feel free to contact us Monday thru Friday 8am-5pm EST at 1-800-289-8739. Erin, Trex Customer Care

I have a 400 sq ft deck with 12" spacing. Do these fasteners come in a larger quantity than 90

Thank for you for choosing Trex. You can purchase the fasteners in larger quantities at Lowe's, HD, or on our Shop.Trex.com website. If you need any further assistance, please call 1-800-289-8739 Monday thru Friday 8am-5pm EST and we would be happy to assist. Erin, Trex Customer Care

DO THESE WORK ON FIBERCON GROOVED BOARDS?

They should. I used mine on a non-Trex product and they worked fine, but it wasn’t fibercon.

How many fasteners should I buy to install a 28x14 deck?

Trex instructions indicate we should use one fastener on each joist. See the below link to download the Trex decking installation instructions. https://documents.trex.com/is/content/Trex/19TRX017_Trex%20Decking%20Install%20Guide_2020pdf.pdf

How much spacing between deck boards does this provide? 1/4 inch? 1/8 inch?

Trex recommends a 3/16" minimum and 1/2" maximum spacing to allow for expansion and contraction. See the following URL for installation information. https://documents.trex.com/is/content/Trex/19TRX017_Trex%20Decking%20Install%20Guide_2020pdf.pdf

Your math is good, you just need to ensure a tight fit with each board gap. On my deck, I used square-edged board around the perimeter (so the grooves werent showing. Those edge boards had to be rip-cutted on the long edge. It is a little hard to plan a deck size perfectly so a board doesn't have to be ripped, especially if the edge boards are overhanging fascia. A lot needs to be taken into account.

Dear Mike: Yes, although I recommend stainless steel Fiberon hidden deck fasteners, which are easier to install. See: Fiberon Model # BKT BRD VER HF C90, Home Depot nternet #202671704 , UPC Code # 844219008002 'Square edge' decking board does not have a groove for hidden fasteners. If you plan to install square edge around the perimeter of your deck ('picture framing') , the boards need to fastened with small L brackets from the under side of your deck,. On the outer side, these brackets are covered by a composite 'skirt board' that is attached to the rim joist.. Another option is FastenMaster Cortex screws and caps; caps are available to match most types and colors of composite deck board. For example see: FastenMaster Model # SCREW FIB IPE, Home Depot Internet #302200945, UPC Code # 844219012986 If you plan to 'picture frame' your deck with square edge boards, also read up on "ladder blocking", which needs to be installed between the joists on the sides. I hope this is helpful, Mark

Hello, I am installing Trex decking boards on steel joists. Will these work for that? i.e. will t...

I would not recommend these for steel

Jun 22, 2020
Here's what I didn't realize about hidden fasteners
With plastic fasteners, your deck boards are not anchored to the joists. The deck boards are basically floating around. There's enough friction that they don't slide easily, and it's not a problem for normal use of the deck, but it has a big side effect that I wasn't aware of until winter rolled around. If you've got long runs, and you're forced to butt two deck boards end-to-end, thermal contraction will create big gaps between the ends of the boards. Basically what happens is the boards warm up on a hot day, get longer, the end gaps go away, and the boards push apart. Then when it's cold, they contract and leave big end gaps. On my deck, where I have 20' boards laid end to end in places, those end gaps were more than a half inch wide on a cold day. They looked awful! However, I found a simple, cheap, easy solution. I purchased stainless steel "mending plates", which are basically just strips of flat metal with holes in them. By placing these on the undersides of the deck boards at each end-to-end joint, securing them to the deck boards with wood screws, I was able to solve the problem. Now I can have two long boards butted up end-to-end and they expand and contract as one. No gap between them whether it's hot or cold. Fortunately, the underside of my deck is easily accessible, allowing me to make this fix after the deck was already constructed. So with this problem solved, I wholeheartedly recommend the plastic fasteners over the metal style. I like the ability to replace any board relatively easily if it gets damaged, which is something you can't do with the metal fasteners, you're forced to remove all the boards to the outside of the one you're replacing. I also like the wider 1/4" side gaps provided by the plastic fasteners, because good drainage is important. Most metal fasteners give a 3/16" side gap. And I like that the deck boards can grow and shrink lengthwise with temperature without putting sideways forces on the joists, potentially splitting them. By the way, I used these Trex plastic fasteners on Fibreon decking and they fit fine. At the time I rebuilt this deck, Fibreon had announced their plastic fasteners but hadn't brought them to market. These Trex plastic fasteners were also considerably less expensive than the Fibreon metal ones. Now sure, as other reviews mention, you're gonna break some screws on occasion. The screws have to be small to fit in between two deck boards, and small equals weak. If you detect that a screw is bent, stop driving it in. Take it back out and replace it, because the bent ones are the ones most likely to break. If you do break a screw, just drill a new hole through the plastic adjacent to the old hole and put a screw into it. It looks kinda funky but it works. Also, be careful, when driving them in, to not drive the screw head below the level of the plastic. Use a tool that gives you good control. Some of these 1/4" impact drivers are too violent. Use a good variable speed drill instead. One last tip: use butyl tape on the tops of all your beams and joists. That's where they like to rot. Trex makes a product, and Home Depot sells it at a very reasonable price. Also the Imus Seal product is a good one, although usually a bit more expensive. Not only does the butyl tape protect your beams and joists from rot, but it also prevents squeaking and creaking when you walk across the deck. Just a good thing to do all the way around, when building a deck.
by zfmax
Response from TrexSupportJun 26, 2020
Hello, and thank you for choosing Trex Hidden Fastening System. We appreciate your business and the time you took to write this great review! Kindly, Elisabeth-Trex Customer Care

Thank you for taking the time to leave such a wonderful review! We are happy to hear that you love our product and hope you enjoy it for many years to come!