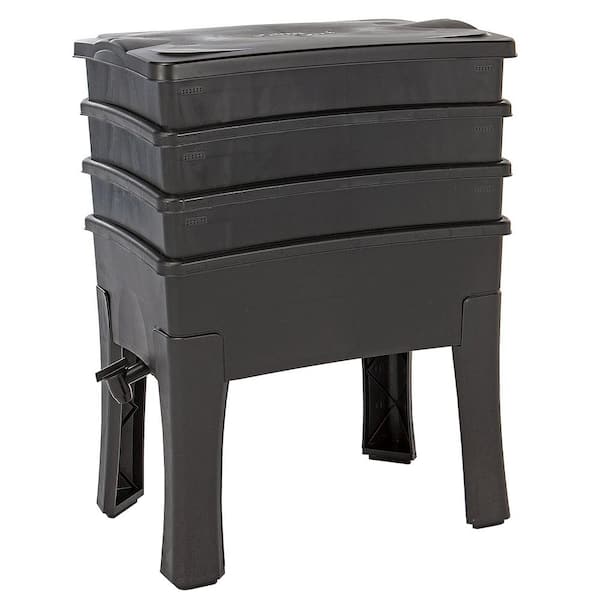 Tumbleweed's Worm Cafe is the ultimate worm farm for indoor or outdoor use. With a sleek new design and clever features, the Worm Cafe turns organic waste into rich worm castings and worm tea with no mess. You'll find your Worm Cafe is easy to use in every way - a hinged lid helps you open and fill your worm farm while a sloping base on the collector tray assists the worm tea to drain easily from the drip free tap.

is this easy to use

Hi alia: Thank you kindly for your interest. The Tumbleweed Worm Cafe is quite easy to use and very quick to install. Once you have setup your worm farm unit, added in started soil with 1000 Worms ( worm species: composting Worms/ Red Wrigglers/ Night Crawlers) and then start by adding in your organic food waste. There are 3 working trays, as they get filled up with rich compost - empty and feed your garden/plants with rich fertilizer...that easy! Periodically, drain your base tray by opening the tap (included) - this liquid is a rich natural fertilizer for your plants. Please feel free to reach out to us directly @ 1-855-215-6858 or sales@ftrproducts.ca for additional support

Can this be used without worms, like regular compost pile?

I guess it could. But worms really add so much benefit, I can't see why you would leave them out.

0
Filter by:
Showing 1-10 of 16 reviews
Nov 2, 2020
Love my worm bin!
The design is well thought out and just right, very stable so kids or pets can't knock over and built very sturdy. My worms are happy and growing good and there is no smell at all. I love that there are separate bins I can add as needed. I'm glad I chose this one over others I was looking at, it's perfect!
by Mary

Thank you kindly for your feedback!

Tumbleweed's Can-O-Worms is a great way toTumbleweed's Can-O-Worms is a great way to get kids into recycling and it's bursting with fun. The world's best-selling worm farm has been designed with built-in mounds to encourage worms to move from collector trays to working trays. A unique flow through ventilation to maximize performance and no mess extras like well designed legs and a drip free tap.See Full Product Description

82 gal. Compost Bin with Base

he Enviro World Compost bin with Base ishe Enviro World Compost bin with Base is the most popular accessory for biggest selling composter. “Compost Happens” The FreeGarden Earth compost bin is an efficient, durable, and economical tool that saves money and provides many benefits for homeowners and gardeners moreover it comes with Base which Increases ventilation and drainage. Manufactured of 100% recycled content, its single-unit main body construction means no difficult assembly and no structural integrity issues over time or in extreme weather conditions. The animal and pest resistant lid twists for variable ventilation control, and covers a large 19.5 in. (49.5 cm) opening that offers easy, generous access to add material and maintain the pile.See Full Product Description

Algreen's Terra dual-batch tumbling composterAlgreen's Terra dual-batch tumbling composter is an elegant way to eliminate organic waste yet effective for conversion into nutrient rich compost. The easy-to-tumble composter reduces the need to manually turn compost piles. At the same time the dual batch system allows you to separate new waste from older waste; this way you can continuously use your composter without having to wait for everything to compost completely.See Full Product Description