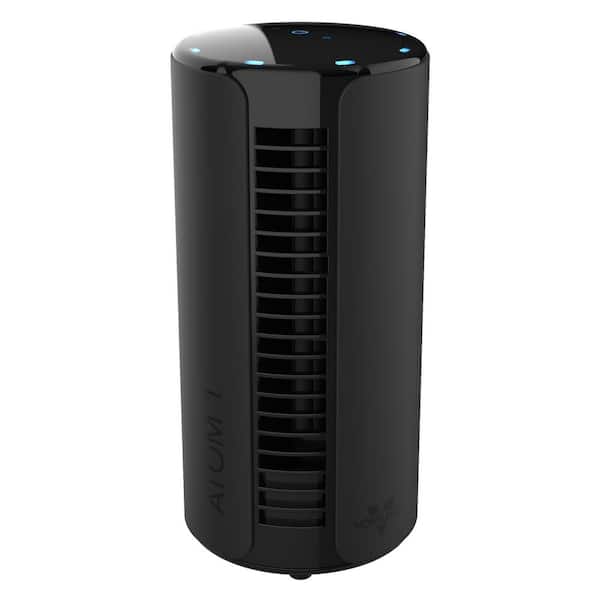 The unexpectedly powerful Atom 1 is a small room tower circulator that brings substantial airflow anywhere in the home, and with the swipe of a finger you can easily choose from 90° up to 360° of oscillation. With 4 speeds you can go from a gentle breeze to a high-velocity rush of air. A little product that brings a big list of credentials - Atom 1 is small, but mighty.

1
Filter by:
Showing 1-10 of 38 reviews
Jun 10, 2021
Small, but powerful
[This review was collected as part of a promotion.] I have fans in every room of my house. During the late spring and throughout summer it can be quite muggy in my home. I was super interested in this small table top oscillating fan. First off, this is a nice size fan. It’s round and only about a foot tall, so it fits pretty nicely on most of my tables and dressers. I also like that the cord can disconnect from the unit. I can keep the power cord plugged in, but when I don’t want the fan out, I just unplug it from the cord and store it. I haven’t seen an option like this on any other fan I’ve owned or looked at. As for the actual controls, it’s pretty simple once you figure out how it works. The instructions that came with it helped out a lot. I was able to easy read how to set the speed and the direction I want the fan to swivel. This fan has a neat digital display face on top. It lights up, and is bright enough to see. Like I said before, the instructions helped a bunch with figuring out the oscillating part. Lastly the air flow is really nice on this small fan. I was super surprised by how much air it puts out on the highest speed. It actually reaches pretty far. The noise of it isn’t to loud, on high it’s more noticeable, but I think it’s like that with most fans. Overall, this is a great little fan. I would recommend it for anyone with a limited amount of counter/desk space, and for anyone looking for a small oscillating fan.
by

Customer review from a site owned and operated by Vornado Air LLC
Jun 8, 2021
Best Fan I’ve Had
[This review was collected as part of a promotion.] I am so impressed with this little fan! This fan does a great job with airflow- much better than a fan I got for double the price and three times the size. The low setting is very quiet, while the highest works perfect for me at night when I want some white noise. I love the way the touch screen works as well. Swiping to choose the fan direction is a really cool feature that makes it feel high tech. This is by far the best fan I own!
by

Customer review from a site owned and operated by Vornado Air LLC
Jun 6, 2021
Works well
[This review was collected as part of a promotion.] I received this Vornado Personal Tower Circulator about one week ago. I could tell it is well made. Simple controls on top of the Circulator, multiple speeds and other great Features included too. Has good air flow and Isn't noisy. I recommend this high quality item.
by

Customer review from a site owned and operated by Vornado Air LLC
Jun 5, 2021
Powerful
[This review was collected as part of a promotion.] This Vornado-ATOM 1 compact oscillating tower may be small, but it is powerful. You have a few speeds to suit your liking and you can move up or down for the breeze. Just set it on a table or desk and plug it in.
by

Customer review from a site owned and operated by Vornado Air LLC
Jun 2, 2021
Great for your personal space
[This review was collected as part of a promotion.] This is a great little product to circulate air in your personal space. It is compact. It is about 10 inches tall. It has a sleek look to it. It is not extremely powerful like a fan would be but it performs as it claims. I am planning a trip in the near future via train and will be taking this with me. I will have a small sleeper car and I think it will do great in the space. The instructions are clear. The Vornado name speaks for itself in its reputation of great products.
by

Customer review from a site owned and operated by Vornado Air LLC
Jun 2, 2021
Love it!
[This review was collected as part of a promotion.] This fan is amazing! I love the touch settings and don’t have to fight with switches that might wear out. It can go up to a nice strong setting. I like that it can oscillate off you want it to. I keep a fan on my nightstand because I get so hot at night and this one is just perfect for me. Maybe someday they’ll offer it in fun colors.
by

Customer review from a site owned and operated by Vornado Air LLC
Oct 25, 2021
Might be fine for you but a little to small for me!
This worked fine but did not care for it as it was too small for what I needed it for!
by
Response from Vornado Air Family of BrandsOct 25, 2021
At Vornado we take pride in our products and are sad to hear this product did not meet your expectations. We would like to see if we can be of assistance in improving your satisfaction. Please go to Vornado and begin a chat session with us by clicking on the chat icon, e-mail or call our service line at 800-234-0604. - Vornado Consumer Care

Oct 2, 2021
Great little fan
Great little fan. Settings 1 & 2 are so quiet and move a surprising amount of air. I'd like another setting between 2 & 3 but they are still very good balance of air flow/ noise. Setting 4 becomes a little noisy for everyday use but it moves an absurd amount of air for such a little fan. Great quality build which doesn't surprise me coming from vornado. My 1 complaint is that it doesn't have a timer! All and all its a great product.
by

Customer review from a site owned and operated by Vornado Air LLC
Sep 22, 2021
Hard to figure out how to use...
Hard to figure out how to use
by
Response from Vornado Air Family of BrandsSep 22, 2021
At Vornado we take pride in our products and are sad to hear this product did not meet your expectations. We would like to see if we can be of assistance in improving your satisfaction. Please go to Vornado and begin a chat session with us by clicking on the chat icon, e-mail or call our service line at 800-234-0604. - Vornado Consumer Care

Jul 25, 2021
So compact but so powerful
We own a teeny tiny shop that gets VERY hot in the summer. I was able to place two of these on our counters without compromising much space and they are FANtastic. Sorry.
by

Designed for desk or tabletop use, this compactDesigned for desk or tabletop use, this compact Comfort Zone 2-speed cooling fan is a smart addition to any office, home or workstation. Measuring just 12 in. tall, the fan has a slim, elegantly-shaped design that is easy to reserve space for on even a cramped desk or side table. The quiet office fan offers two speed settings, making it easy to adjust the output to your space's requirements. A simple turn of the dial allows you to quickly adjust it from low to high speed, or vice versa, as the temperature rises or falls. The desktop office fan boasts high performance centrifugal blades that deliver quiet and consistent output. An oscillation function helps to ensure a wide range of coverage, while the fan's quiet operation makes it suitable for use even during phone calls, meetings and conferences. A built-in molded carry handle makes the 12 in. oscillating table fan easy to transport around your home or workspace throughout the day. Its compact design fits easily into storage when not in use.See Full Product Description

Cool Breeze makes me feel fine The OventeCool Breeze makes me feel fine The Ovente TF88S Cool Breeze Tower Fan was stylishly and practically designed to blow fresher and cooler air while enhancing any room. It does this by collecting cool air from the ground where it's at its coolest point then releases cooler and fresher air back into the atmosphere. It makes little to no noise while it cools down your room with its 90° oscillation providing you with a more peaceful environment for sleep relaxation and comfort. It also features 3 quiet speed settings (low medium high) so you can control exactly how much air you want being blown around while saving energy for when you don't need much. You can set the timer or the speed of the fan remotely, via the remote control LCD panel, for ease of access and convenience. The timer has a maximum of 8 hours (auto shut-off) and can be programmed within 1-hour intervals. To clean wipe the body of the fan with a soft cloth only. It's backed by Ovente's 1-Year Limited so snag yours today-absolutely RISK-FREE!See Full Product Description

30.7 in. Oscillating Tower Fan with 3 Speeds

Clear the air with Fanfare's 30 in. OscillatingClear the air with Fanfare's 30 in. Oscillating tower fan Enjoy the convenience of 110° oscillating function, 3 powerful speed selections and a built in carry handle for easy portability. The FTF-3000 is equipped with a 45-Watt powerful motor providing you with efficient cooling and longer lasting operation.See Full Product Description