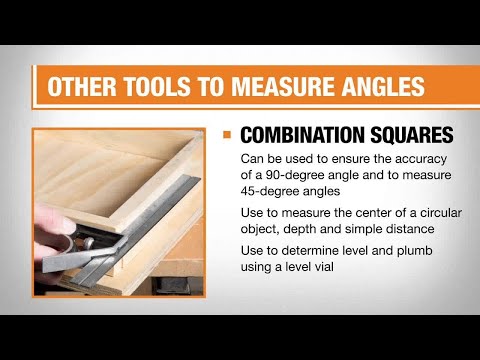 If you do a lot of woodworking projects, then you’re probably very familiar with angles. When it comes to angled cuts, it’s wise to follow the old adage of “measure twice, cut once.” Tools can help you measure angles precisely.

Though angled cuts can be a challenge, this guide will show you tools to measure angles, no geometry textbooks needed. 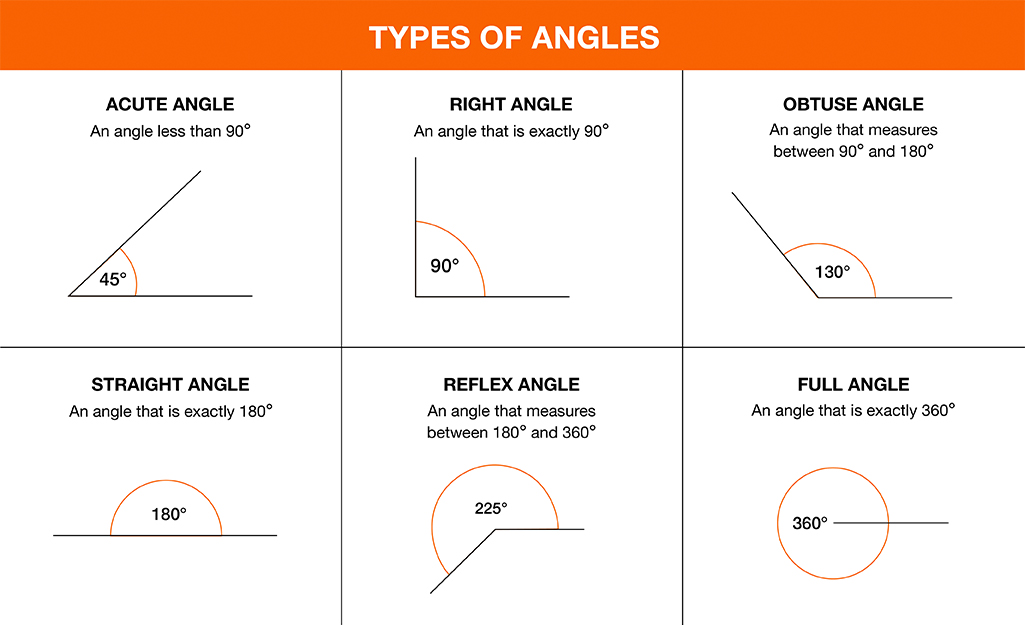 In geometry, an angle is the space between two lines, rays or planes intersecting each other. Angles are measured in degrees. The five main types of angles are:

Parts of a Triangle 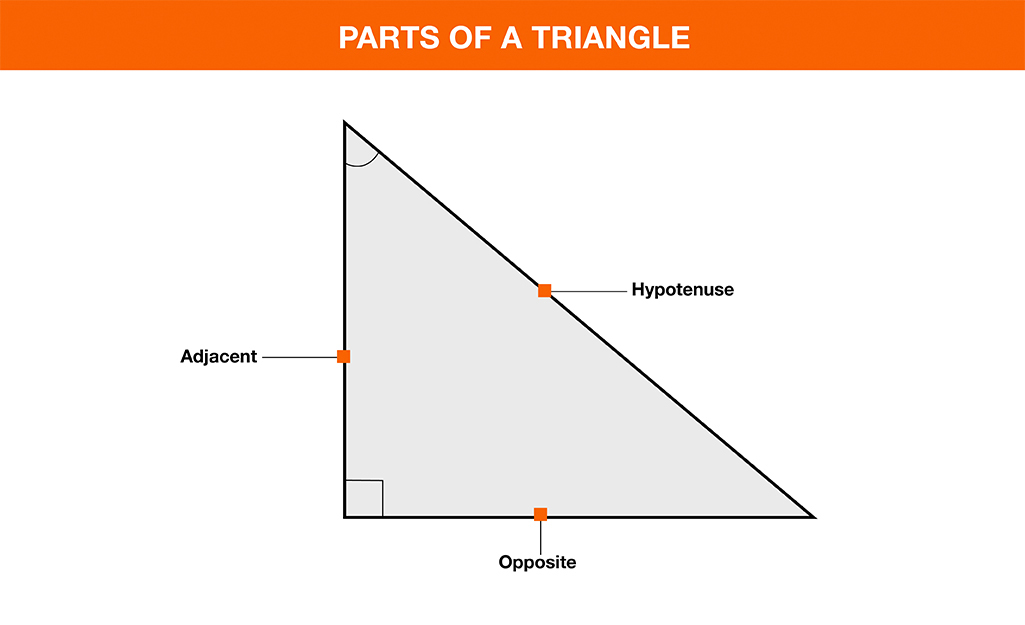 Before you can accurately measure angles, you need to understand the different parts of a triangle. Knowing the parts will help you determine where to line up your tools to measure angles. A triangle has three sides and three corners (angles).

Note: In a right triangle, the hypotenuse is the longest side, an "opposite" side is the one across from a given angle, and an "adjacent" side is next to a given angle. 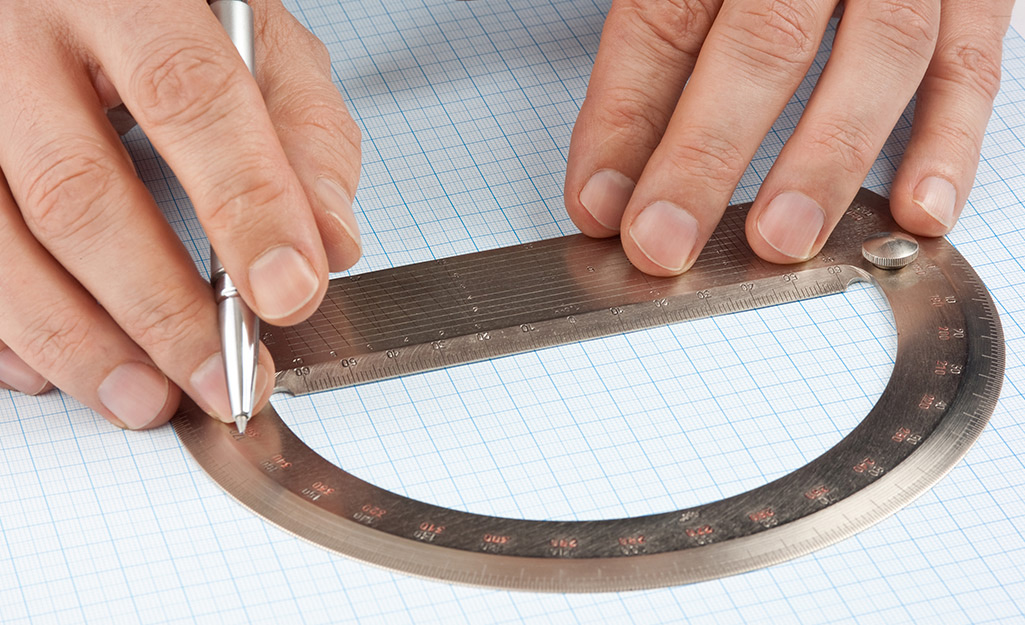 The types of tools to measure angles fall into one of three categories: protractors, squares and compasses. There are many variations of these basic tools.

A protractor is one of the most common tools to measure angles. When you know how to use a protractor, you can measure both small and large angles.

Protractor types are categorized according to their tasks. The most common kind of protractor is found in the school supply section of big box retailers. Typically, it is a plastic half circle with marked degrees from 0 to 180. Mechanical protectors, like bevel or round protractors with 360 degrees, are used by professionals, like engineers and architects.

A protractor has two sets of numbers. On the outer rim, one set goes from 0 to 180. On the inner rim, the other set goes set from 180 to 0. The one you read depends on where you put the protractor. Always place the protractor so that one side of the angle lines up with one of the zeros.

Hand squares are used to measure right angles. They have degrees from 0 to 360 and are usually L-shaped. As you figure out how to measure angles for the construction of stairs, frames and rafters, they are very useful. Hand squares are also used to calculate square feet.

Like protractors, hand squares come in a variety of styles. The tools are not the four-sided squares you might expect, though. Instead, they are half squares or right triangles. Set squares, mostly used by students, are a right-angled triangular plate for drawing lines, especially at 90, 45, 60 or 30 degrees. 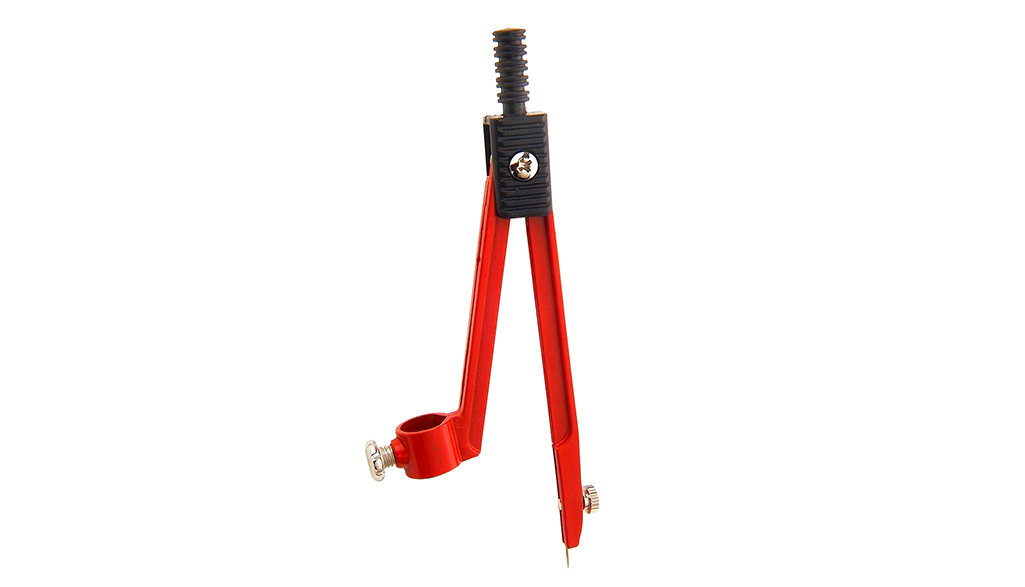 A compass is a measuring tool with a hinged set of arms. One arm has a pointed end and the other holds a pencil. Most people have only used this tool to draw circles, but it can also be used as a tool to measure angles. A protractor is technically also a type of compass, but it has only 180 degrees, while a compass has a 360-degrees rotation. 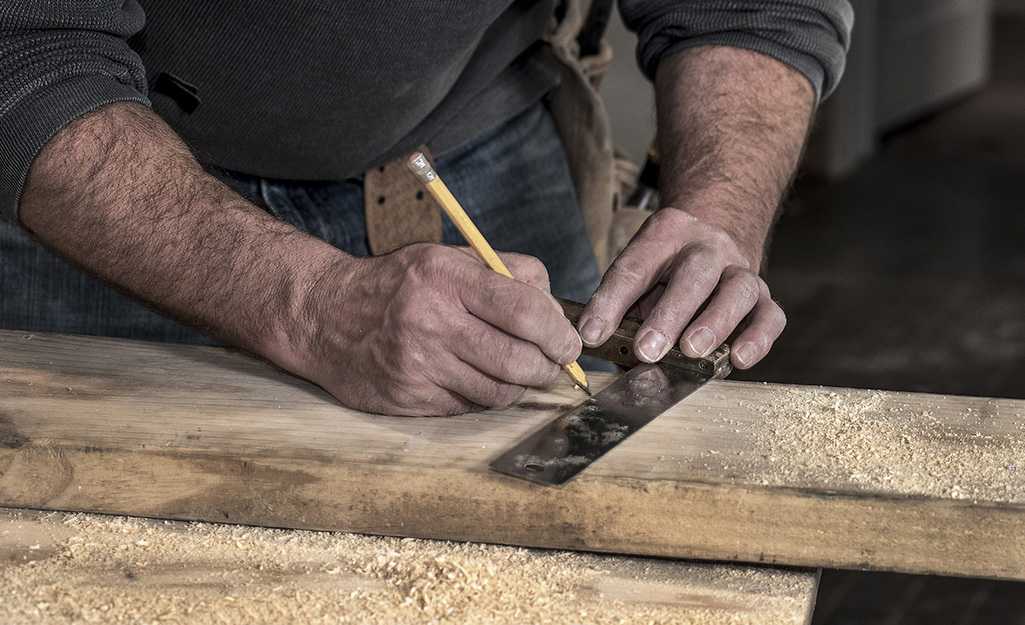 Carpenters may use miter saws and table saws to get angled cuts, but knowing how to use hand tools to measure angles will ensure walls, stairs, rafters and more are level.

Carpenter squares are a category of tools that cover all hand squares used by carpenters. They often have multiple functions and can be used in a number of ways for carrying out simple carpentry activities. 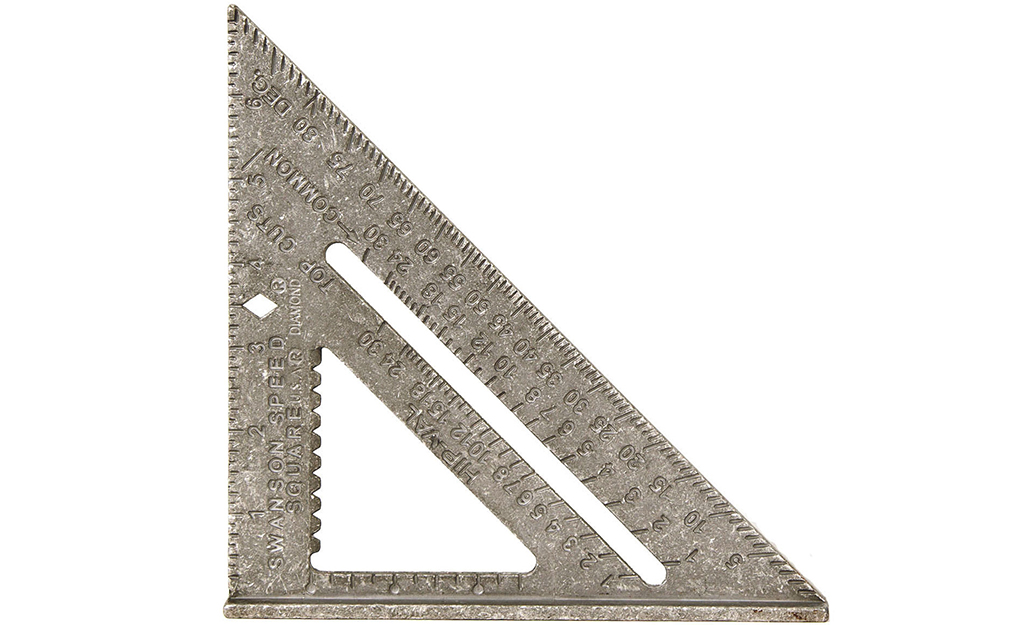 A speed square is a right-triangle-shaped ruler with a lip on one of its sides. The lip allows you to place it up against the edge of a board or other piece of material for accurate measurements. A speed square has a pivot point (the vertex where the two short legs form a right angle) on one of the corners on the lipped edge. The pivot point is the starting point where all measurements are determined. The long edge of the right triangle (the hypotenuse) is where the degree measurements are located.

How to measure an angle with a speed square: 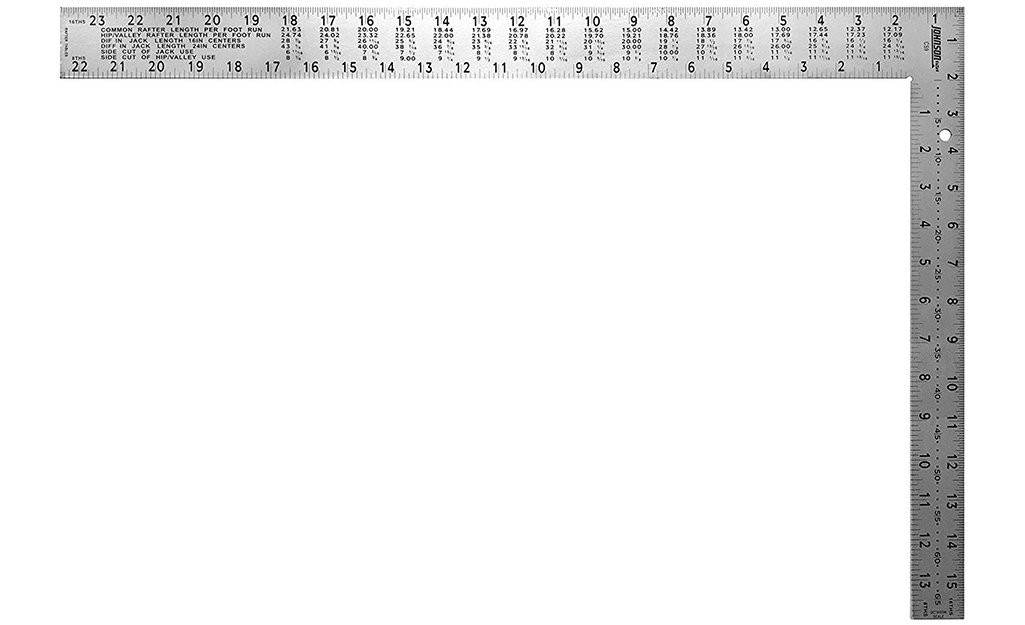 A framing square is basically a large, L-shaped piece of metal. It has several scales, including a diagonal scale, a board foot scale and an octagonal scale. It's primarily used to cut angles for rafters and staircase stringers.

Tip: You will need a scientific calculator or tangent chart to calculate the proper length of each line to match your desired angle.

How to use a framing square for angles:

How to use a combination square to draw a 45-degree angle:

Similar to framing squares, try squares are dedicated right angles. They feature a metal blade fastened into a wooden handle rather than single-body construction. Try squares are good for measuring short distances and to check surfaces for straightness (square) or its correspondence to an adjoining surface.

How to check if a board is square with a try square: 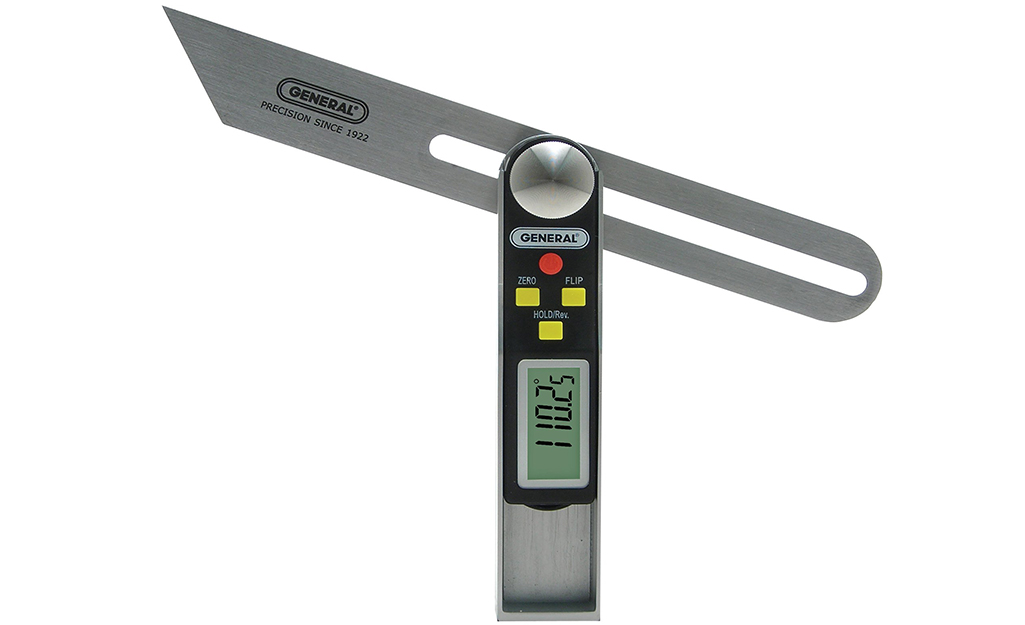 A sliding T-bevel is used for both laying out and transferring angles. It is composed of a handle with a metal blade attached to it. One end of the blade is rounded off, while the other is cut at a 45-degree angle.

How to make a new angle with a T-bevel:

How to transfer an existing angle with a T-bevel: 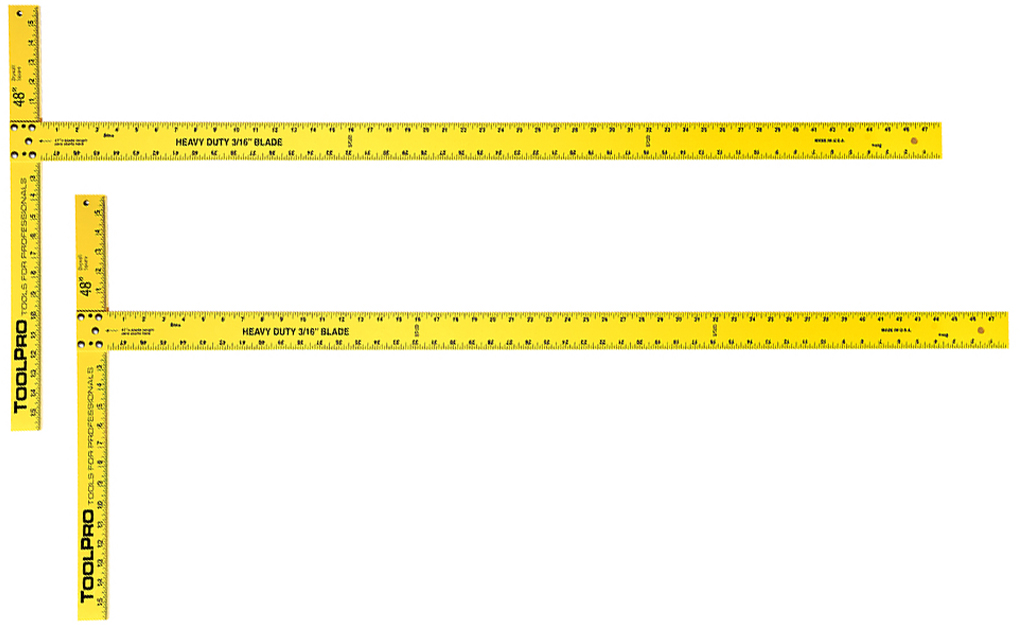 A T-square has two components: the long shaft called the "blade" and the short shaft called the "stock" or "head." T-squares are only used for straight horizontal lines or right angles, but you can use set squares with them to draw vertical and angled lines. In home improvement projects, a drywall T-square is made to help cut straight horizontal lines in drywall or other plasterboard. It’s larger than a regular T-square.

How to use a drywall T-square:

For most home improvement applications, you will only need to know how to use a protractor or how to use a square to measure and draw angles. Learning how to measure angles may seem intimidating at first, but once you understand the terms and parts for each tool, the task will be easier. Tape measures and construction calculcators can also come in handy as you measure angles.

With the right tools to measure angles, you can take your DIY projects to the next level. The Home Depot delivers online orders when and where you need them.

What Is a Woodworking Jig

How to Read a Tape Measure

How to Use Levels and Carpenter Squares