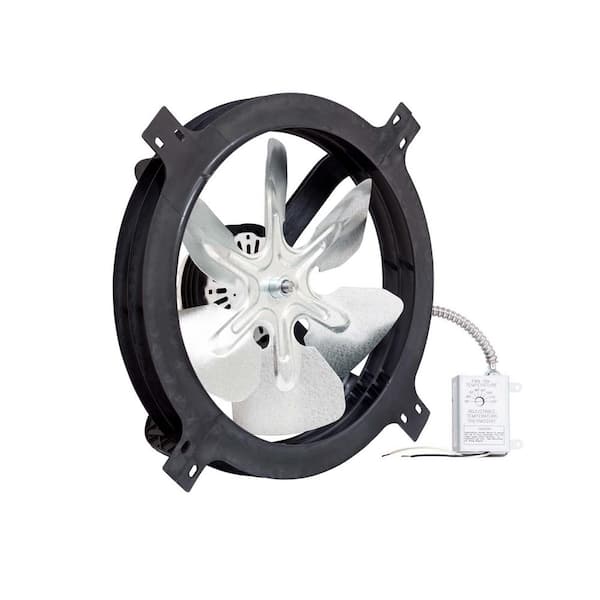 The Gable-mount power vents operate 30% quieter and 35% more efficiently than comparable units. The fan blade is encased in a patented series of rings not a cylinder like standard units. This open ring configuration allows the fan motor to move air more efficiently and with fewer restrictions. The Gable fan uses a thermostat control to help prevent heat build-up inside the attic.

QuietCool Attic Fans work almost everywhere,QuietCool Attic Fans work almost everywhere, almost anytime. During the summer, an attic can be 40° to 50° hotter than the outside temperature, which in turn heats up the house very quickly. with an attic fan, you can cool the attic to the same temperature as it is outside, greatly reducing the house from heating as quickly. with the New QuietCool Smart Attic Fan, gone are the-days of having to get into your attic to adjust the thermostat for your attic fan. with the innovative Smart Attic Fan Control, you can now adjust all parameters for your attic fan from your phone. The control also has a Smart Mode that will automatically change speeds based on the conditions in your attic. The QuietCool attic fan is able to keep the attic cooler since it ramps up the speed of the motor in accordance with the temperature in the attic rather than a standard single speed attic fan that would come on at a higher temperature.See Full Product Description

Trapped attic air can easily reach 150 degreeTrapped attic air can easily reach 150 degree or more. The BROAN 35316 gable mounted attic ventilator will remove super-heated attic air, making any home more comfortable, whether it's air conditioned or not. In those homes that are, the air conditioners will run less and won't have to work nearly as hard. And this powered attic ventilator is as efficient as it is dependable. An adjustable built-in thermostat operates automatically giving a quiet, high performance operation for inside-the-attic application. Combine with the specially designed 433 Automatic Shutter to get optimum efficiency and performance.See Full Product Description

Maxx Air Premium Series model is built toMaxx Air Premium Series model is built to ventilate residential attic spaces up to 2,400 sq. ft. and is a great fit for situations in which roof-mounting is impractical. Constructed using a durable galvanized steel shroud in powder-coated blue finish, safety grille and powder-coated blades for added durability and to resist heat distortion and paired with a mounting system engineered to minimize vibration and ensure quiet operation. Install is straightforward using the included bracket hardware and requires no special tools to complete. The adjustable thermostat runs only when you need it, keeping your attic at a constant temperature while minimizing it's operation cost. This fan is designed to prolong the life of composition roof shingles by lowering summer attic temperatures and helps to protect attic insulation against mold and mildew in the winter by removing moisture-filled air. Install behind existing louvers or purchase our shutter model (CX2121AM) and swap your pre-wired thermostat for a thermostat/humidistat combo (XXDUOSTAT) for greater control.See Full Product Description