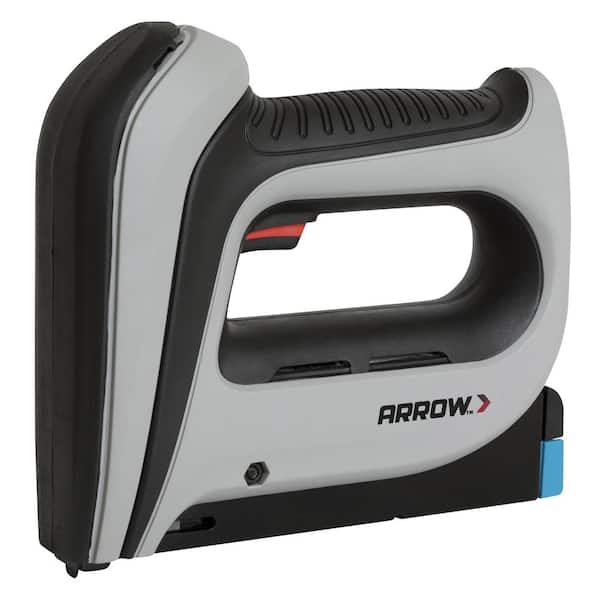 For dedicated crafters and DIYers who don't want to be constrained to power outlets, the Arrow T50DCD Cordless Staple Gun is the tool to use. This convenient staple gun utilizes a 3.6V lithium-ion battery, powering it to deliver 500 full-power shots. Operators can tell when it's time to reload genuine Arrow T50 staples, thanks to the staple gun's viewing window that shows when the magazine is running low. Combined with an overmolded grip for comfort and a bottom-load magazine, you'll be ready to take your T50DCD Cordless Staple Gun anywhere to get the job done.

What is the life expectancy of the battery while in storage? IOW, will this last 10 years with le...

Hello - There are many factors that contribute to the life expectancy of a lithium ion battery. Temperature has a big impact. You can find information on the use and care of the tool/battery in the T50DCD manual. Here's a link: http://bit.ly/t50dcd-manual. Thanks for your questions. - Your Arrow Fastener Team

Does this Gun handle brad nails

What is the distance from the front of the gun to where it staples?

Could i use this to secure insulation in a tight crawl space?

Yes, as long as you can push down and get it make enough contact. I used it for hog fencing to put around our house (it’s up on piers) to keep feral cats out. A few spaces were tight due to stairs/railings but I was able to get it all in place successfully.

Charged but not firing

Mine works great. you have to put the nose of the stapler on a hard surface then pull the trigger.

My Staple Gun is fully Charged, But it will not Fire?

Mine came charged and ready to go - I bought and received it about a month ago. Works great. An idea - maybe with the cold weather the battery was depleted during shipment. Did you try charging it?

Will this go through tempered hardboard?

I'm looking for a cordless staple gun that will staple onto the hard plastic seat on a motorcycle...

88
Filter by:
Showing 1-10 of 6,796 reviews
Jun 18, 2021
Worked well, and good value.
We purchased the stapler to staple half inch staples to wood, securing screen to keep rodents from under our house.. It took a few minutes to figure out how to load the staples, but once we got them loaded the stapler worked very well. I recommend this product.
by Ratpatrol
Jun 6, 2021
Worked for making cover for raised flower beds
[This review was collected as part of a promotion.] I used this to staple bird netting to wood when making protective covers for my raised flower beds. It worked wonderfully. I had a manual staple gun but the staples did not penetrate the wood. This worked without any effort and made the project go quicker.
by majimi357

Customer review from arrowfastener.com
May 31, 2021
great for small crafts
[This review was collected as part of a promotion.] Purchased this awesome tool to make some small craft projects. So much easier on the hands. I just love it. Great buy. (code 1117)
by Alan97

Customer review from arrowfastener.com
May 26, 2021
Best stapler for small or weak hands!!
[This review was collected as part of a promotion.] After using my manual power shot stapler, my hand was so sore I could not make a fist. I decided to upgrade to a cordless stapler. At first I thought it would be overkill, but as soon as I put my first 5 staples in, I knew this would be perfect for me. My hands are small and not very strong, but this helped me zoom through my project . I made a screen house and this made it so easy, I’m going to make a second one!!
by Tidbitqueen

Customer review from arrowfastener.com
May 26, 2021
Great Stapler
[This review was collected as part of a promotion.] I am using it to reupholstery my living room sofas and my rocking. I am very happy with the grip and fast action on this stapler. I am using the 1/4 and the 3/8 inch staples.
by Andiee63

Customer review from arrowfastener.com
May 24, 2021
Perfect tool for me as ikea funiture assembler
The handle grip is also fit with my hand and make it easier to nail the backboard of ikea Pax system.
by HfxNovice

Customer review from arrowfastener.com
May 15, 2021
Very useful for almost anything you can think of!
[This review was collected as part of a promotion.] The PowerShot T50DCD Cordless Staple Gun was great when it came to putting chicken wire all the way around the fence of my new goat coral I built to keep the goats from escaping. I originally started out with the corded PowerShot T50ACD Compact Electric Staple Gun but I'm sad to say it didnt make it thru to the end of the project so when I went to purchase another one I decided to go cordless this time and love it even more then the corded one. Just hope it last longer!
by Katie27

Customer review from arrowfastener.com
May 4, 2021
Awesome Tool
[This review was collected as part of a promotion.] The T50DCD is so easy to use and works great! I Love that it’s cordless so I can use on projects outside.
by DRich1

Customer review from arrowfastener.com
May 4, 2021
almost a great stapler
[This review was collected as part of a promotion.] So, I bought this stapler to replace a pneumatic stapler because I recently switched to cordless battery powered nailers and don't want to carry the compressor most times. When I drive staples, I'm usually driving 600-2000 staples, so I was really interested in this stapler, as driving that many staples by hand can fatigue your hand. I was immediately disappointed by this stapler out of the box on two fronts. I assumed since this was in the same section as the big, beefy staplers I would be able to drive any T50 staple (why would Arrow build a BETTER stapler that can't drive every staple they make?) and it turns out you can only drive up to half inch staples. The second way is, the case of the stapler is very poorly made The two halves of the clamshell look like they were made in two different factories that are owned by two different manufacturers. The good is, it feels well assembled, comfortable in the hand, and not too heavy for what is realistically a semi automated manual stapler. Ok, so it came time to use the stapler, so I charged it up and went to the jobsite to put in some indoor outdoor carpet, and it was ok. just ok. Like I said, I have cordless battery powered nailers, and I expected this to work similarly well, it doesn't. You pull the trigger, you hear it pull the hammer back up, and you squeeze again, and you get nothing. There is a delay, that is variable based on how many staples and how quickly you fired them between when the stapler sounds ready and is actually ready. This is very frustrating when you are trying to be quick and get the job done. The good is, at least the 3/8ths staples I used were mostly well driven. This is so frustratingly close to an amazingly good stapler, I don't know whether I want to keep it and deal with it's shortcomings, or just return it and keep using a manual stapler and pneumatic stapler. FYI, I've gone back and read some of arrow's responses to these reviews, and they're saying this isn't designed to be a rapid fire gun, and they recommend using a pneumatic gun for harder materials because it's hard to get the required 10 pounds of force over the staple, but for the money, they could put a second 18650 in it and run it at 7.2v (or one 21700 and have more amperage they can pull), put a stiffer spring in it, and program out the delay, ad it would be perfect. Otherwise advertise it with the words "slow reset" and "not very good at setting staples" on the box.
by billybob85
Response from Arrow Fastener TeamJun 14, 2021
Hello, Thank you for taking the time to give such an in-depth review of the T50DCD cordless electric stapler gun. We appreciate your feedback. Even though this tool wasn't as you expected it to be, we hope you get many uses out of it. -Your Arrow Fastener Team

Customer review from arrowfastener.com
May 3, 2021
Great for bunker boat carpet on boat trailers
[This review was collected as part of a promotion.] I used this to replace the carpet on the bunker boards of our boat trailer. I put the staple down with ease and straight ever time. It did an excellent job even when the carpet overlap itself. I would highly recommend this product. It never jammed only failed to shot the staples a few times. Just had to unload and reload the staples. I used arrow brand staples
by 43Junior43

The Milwaukee M12 3/8 in. 12-Volt CordlessThe Milwaukee M12 3/8 in. 12-Volt Cordless Crown Stapler delivers a true hand tool replacement. The 2447-20 is designed to drive a range of 3/8 in. flat crown staples (1/4 in. to 9/16 in.) through an array of materials and substrates. At just 3.0 lbs. and 7.5 in. L the compact design allows for great access into tight spaces and convenient tool belt portability. An easy to squeeze trigger design significantly reduces fatigue associated with traditional hand staplers. Integrated sequential and contact actuation trigger design provides increased productivity and seamless changing between firing modes. The 2447-20 is compatible with all Milwaukee M12 batteries and carries Milwaukee's 5-year limited power tool warranty.See Full Product Description

6 in. Electric Stapler and Brad Nailer

The best performing Heavy-Duty electric staplerThe best performing Heavy-Duty electric stapler and nailers on the market. The tool features a motor driven Spiral Drive mechanism for consistent, powerful driving performance out of every shot. Firing all sizes of T50 Staples and 5/8 in. brad nails, the tool also offers a unique low staple indicator light that blinks when it time to reload your staples.See Full Product Description

Surebonder Triggerfire Cable Tacker, theSurebonder Triggerfire Cable Tacker, the World's first trigger activated staple gun, will safely secure various types of low voltage wire/cable such as RG6, RG59, Cat-5, telephone wire, speaker wire, thermostat wire, rope and more. Steel construction and a chrome finish which resists wear and tear. The tacker features front and back staple guides, an adjustable depth drive, drop-in loading and a jam resistant mechanism, ensuring perfect, consistent stapling. Insulated, UL listed fasteners will not crimp when using this tacker. The tool will fasten any low voltage wire up to 5/16 in. Dia (8 mm). You will be pleased at the ease of using this tacker, select the trigger mode on the mode selector, squeeze the handle to load the staple, position the tacker onto your work surface/over the wire/cable using the guides and squeeze the trigger to set the staple. Install one fastener every 12 in. Switching the mode indicator to Normal will allow traditional stapling. For use with Surebonder #19 UL Listed Insulated Cable Staples 1414C, 516516C, 516516BL, 14516C, 14516BL and Arrow T59 type staples. With this purchase you receive one retail package of the Surebonder #19 1414C, 516516C, 516516BL, 14516C and 14516BL. Each retail package contains 300 insulated cable staples.See Full Product Description