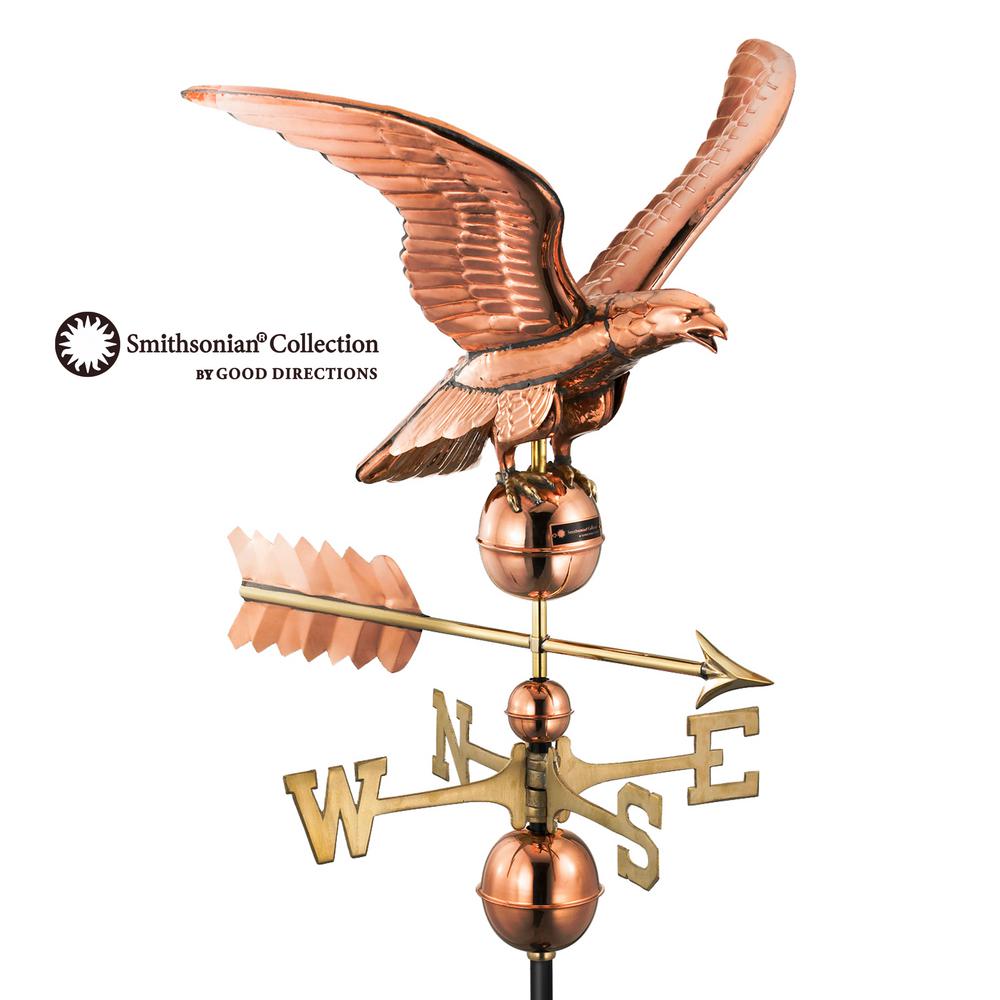 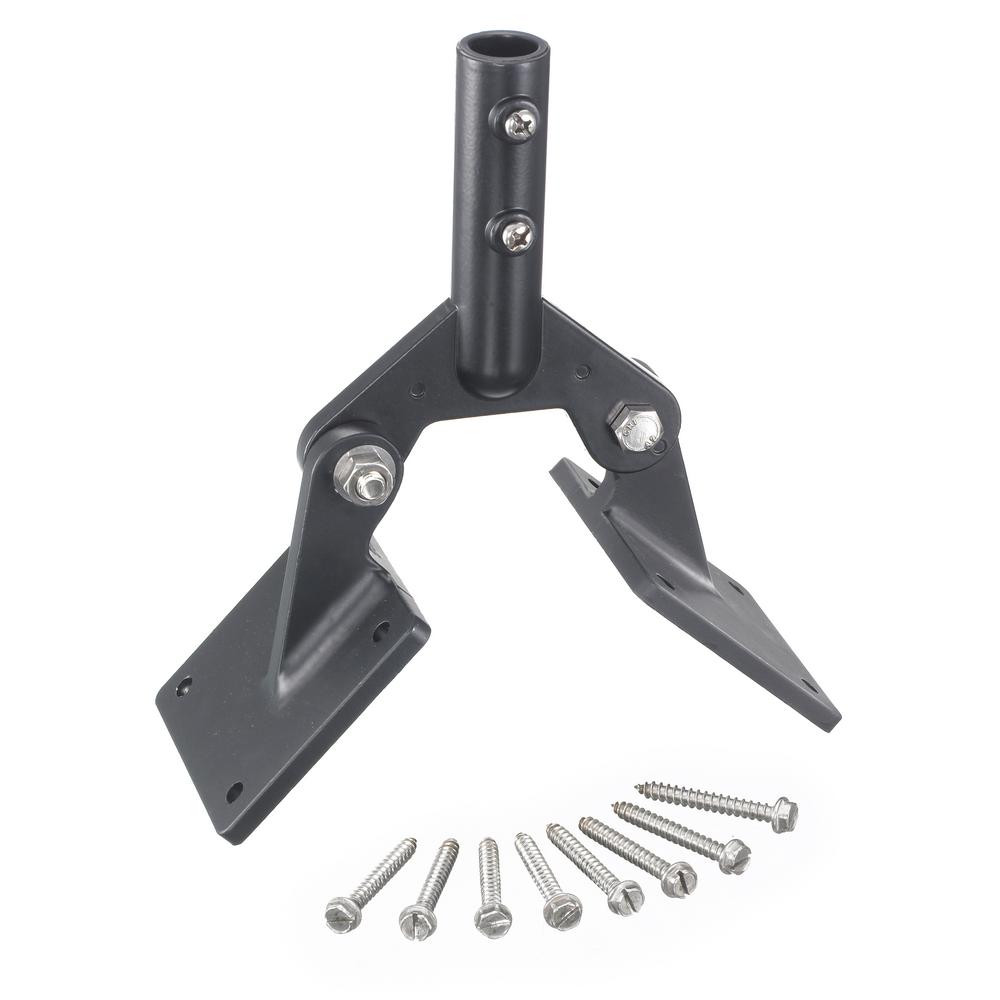 In 1782, the eagle became the official emblem for the new American union. Today, he's spreading his broad wings to adorn the rooftop of your home, garage, cupola, barn or gazebo. Good Directions' pure copper weathervanes are unsurpassed in style, quality, and durability – perfect for the house-proud homeowner. Bring The Joy of Outdoor Living to your home with this heirloom-quality piece.

Many weathervanes come with a hole on the top for a 3/4 rod. What size rod is this weathervane?

What is the measurement on the rod, width , where fits in hole on top of copula?

can this be mounted to a wooden flagpole?

I am building a cupola at home and the vertical reach from the roof BASE (platform) to the hole i...

Hello, Yes, this weathervane comes with a 3/4” diameter assembly rod.

I live in SW Florida where lightning is a real concern in the summer. Wouldn't these act like a lightning rod?

Maybe but you can install a lighting rod on the side and run it all the way to the ground and pound ina 8' 5/8 dia copper rod. Then you have no worries.

The description says it spins easily in the wind. Does it really? How strong a wind is needed bef...

It spins pretty easy. Not a lot of wind to move it.

Where is the 11 inch extension rod for weathervane mounting in cupolas larger than 30 inches that...

we bought a cupola that already has a hole for a weather vane, but the roof does not come off. ho...

YOU MAY NEED A ROOFER TO REMOVE YOUR ROOF - THE ROOF IS BUILT NOT TO COME OFF & ARE MADE TO KEEP RAIN OUT OF YOUR HOUSE - GOOD LUCK.

Do I need a special extension rod to install this weathervane on a roof cupola?

YES, I amend my last answer. Installing in a cupola a rod extension 301-11 is needed.

AMAZING PIECE OF ART
May 8, 2017
Quality :
5
Value :
5
Seeds Program Review
(What's this)
The weathervane came very well packaged. Assembly was easy as the instructions were very clear. The craftsmanship is beautiful. The eagle is quite large and heavy. The directional and arrow are large and will be very visible. The copper is superior and I look forward to it aging naturally. I will be having it installed on my garage on a cupola. It has a lifetime warranty.
Pros: Good Size & Weight, High Quality, Easy to Assemble
Was this helpful?
2
0
Jimbo
Wyomissing, PA, USA

First Class Quality and beautifully crafted pure copper weathervane
April 25, 2017
Quality :
5
Value :
5
Seeds Program Review
(What's this)
Beautiful and impressive. I am a Marine veteran and have always wanted an Eagle weathervane. This Smithsonian Eagle Weathervaner is made of Pure Copper that will last decades and only look better with age as it becomes weathered. Upon recieving this Full size Eagle in copper I am so impressed I am actually speechless. I am more than pleased and yes fully satisfied. Out of a rating 1-5 I say this is a Ten. The weather here in my area has been terrible the last two days since the Eagle was delivered to my home. I am really excited to display this weathervane and could not hold out any longer taking a change to install it between rain showers today. I mounted this on a 4x4 pressure treated 8 foot wood item and let me say again this item is extremely beautiful. No problems at all to install taking only a few minutes to drill a hole down the center of the 4x4 deep enough to except the steel round threaded rod I provided to attach the threaded rod to weathervane and into the structure. My camera does not do justice to the beauty of this item in the backyard. But it has tremendous appeal. I also own the Mermaid weathervane which is in the backgroud of one of the pictures I posted with this review. Once you own one you will want another they are that nice. Produced by Good Directions and supplied by Home Depot. These are of the finest quality weathervanes I have ever seen. Two thumbs up with great pleasure..And proud to display these fine weathervanes.
Pros: Easy to Install, High Quality, Performs Well, Stylish, beautiful, pure copper
Was this helpful?
5
0
RanchLife
Poor quality
May 16, 2020
Received a damaged product. Called customer service No option to replace. Only option was to return. So disappointed as I really wanted this specific weathervane.
Was this helpful?
0
0
Diamondback22
Beautiful Weathervane. Lots of compliments ...
October 29, 2019
Beautiful Weathervane. Lots of compliments
Was this helpful?
0
0
Crutch
The screw on the arrow was stripped out and was replaced with a new one. Very satisfied.
October 4, 2019
The screw on the arrow was stripped out and was replaced with a new one. Very satisfied.
Was this helpful?
1
0
Jia
Looks terrific mounted on our roof!...
August 20, 2019
Looks terrific mounted on our roof!
Was this helpful?
0
0
HomeDepotCustomer
Easy to assemble and attach to roof. Very well made...
August 13, 2019
Easy to assemble and attach to roof. Very well made and beautiful design. Would highly recommend this item.
Was this helpful?
0
0
Review this Product
Share your thoughts with other customers 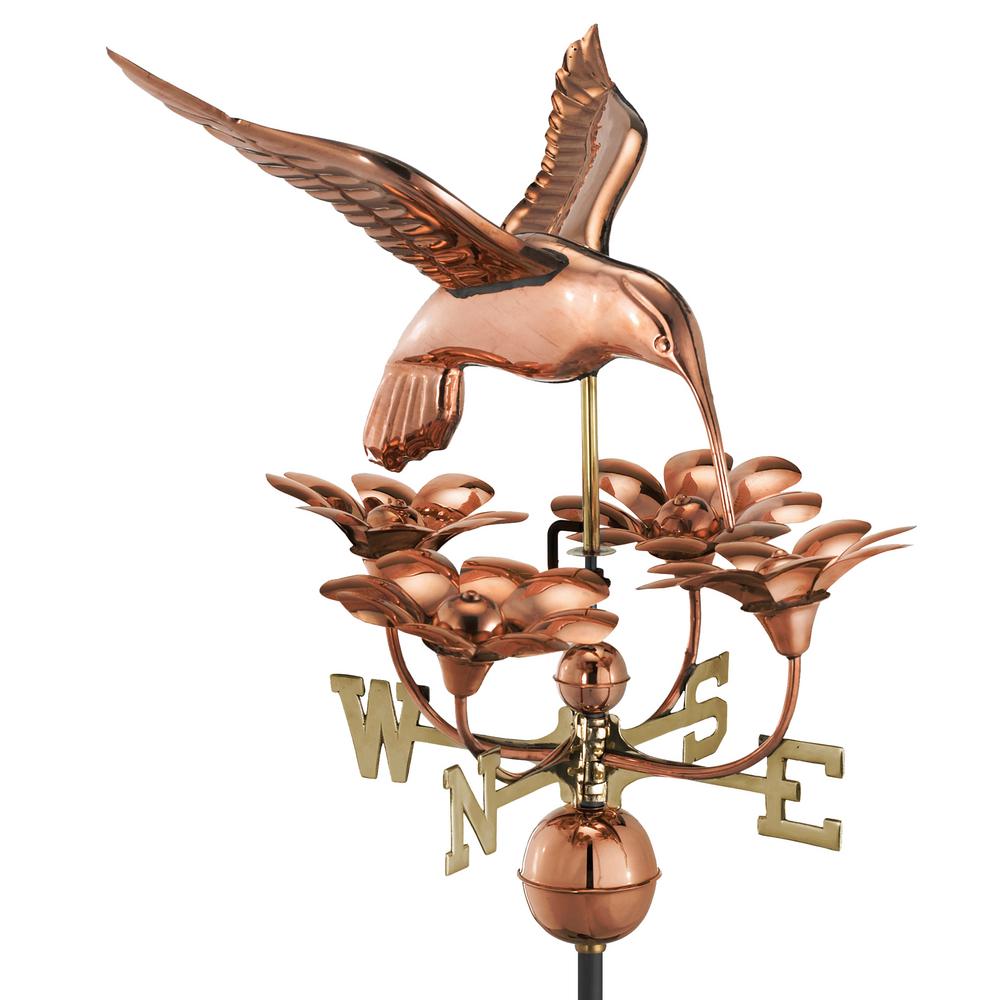 A coveted sight in every backyard, this hoveringA coveted sight in every backyard, this hovering hummingbird, feeding in flight, is ready to adorn the rooftop of your home, garage, cupola, barn or gazebo. Good Directions' pure copper weathervanes are unsurpassed in style, quality and durability – perfect for the house-proud homeowner. Bring The Joy of Outdoor Living to your home with this heirloom-quality piece.Product Details 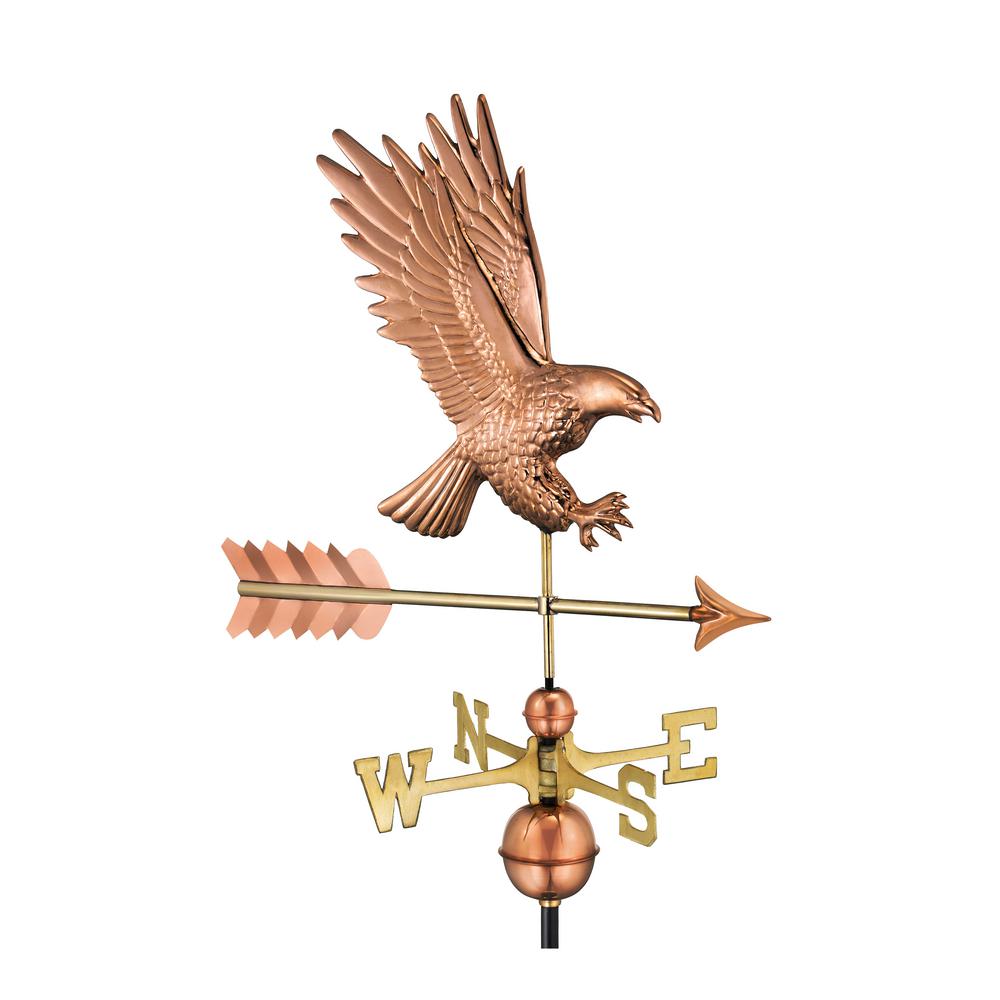 The proud symbol of our great nation, thisThe proud symbol of our great nation, this majestic eagle will dignify the rooftop of your home, garage, cupola, barn or gazebo. Good Directions' pure copper weathervanes are unsurpassed in style, quality and durability perfect for the house-proud homeowner. Bring The Joy of Outdoor Living to your home with this heirloom-quality piece.Product Details 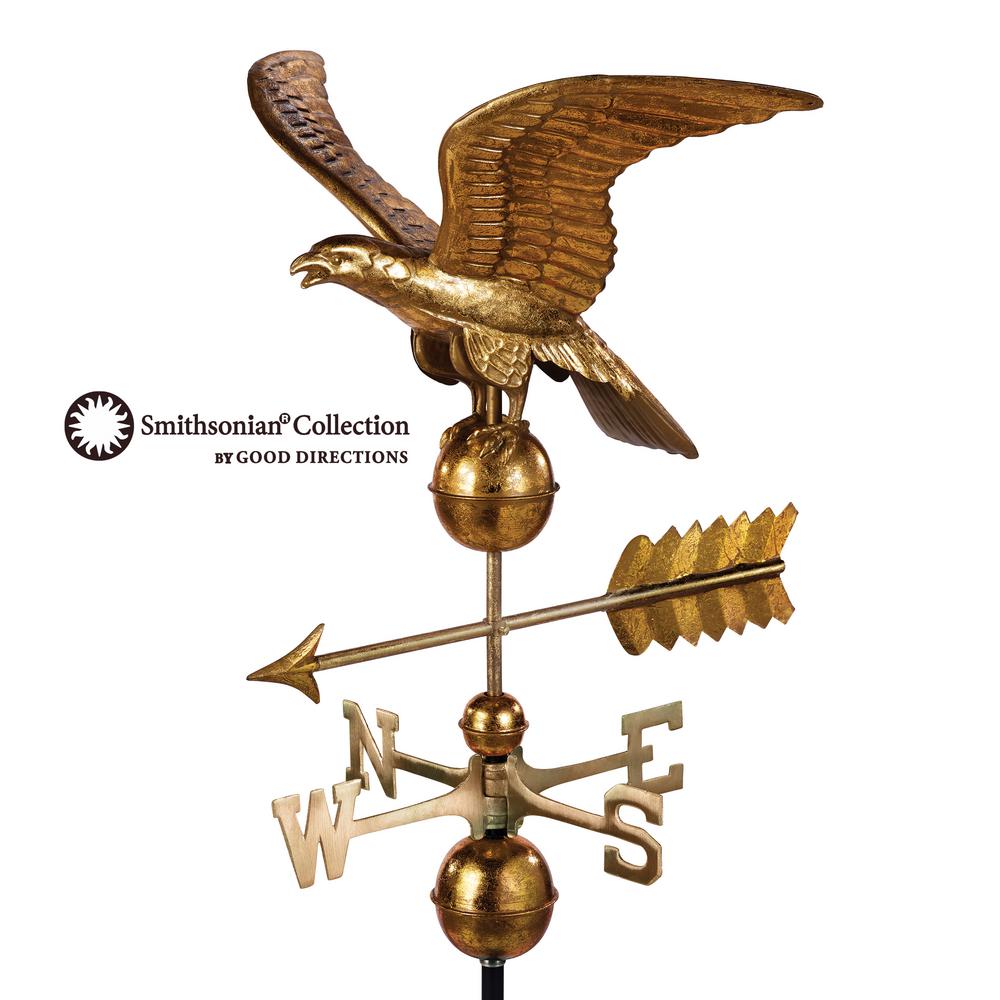 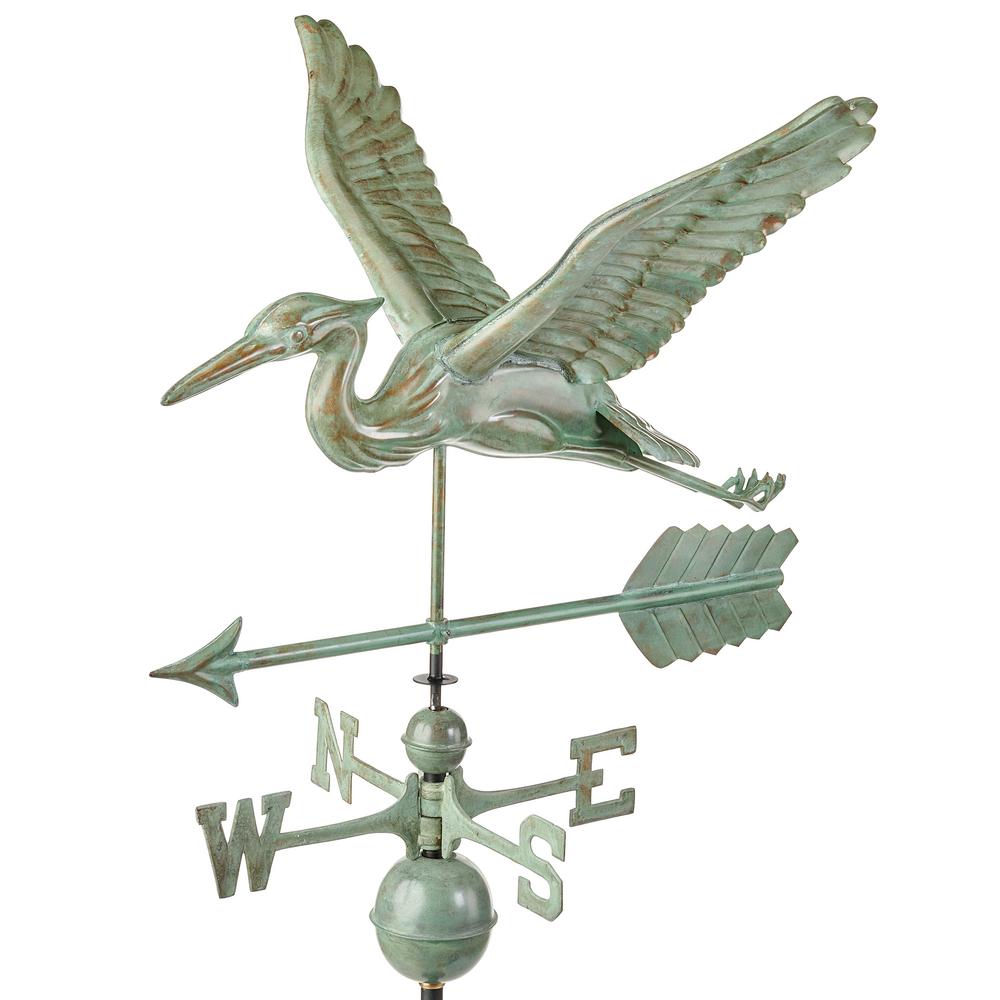 Heading away from its marsh pond nest, thisHeading away from its marsh pond nest, this Great Blue Heron is ready to adorn the rooftop of your home, garage, cupola, barn or gazebo. For over 35-years Good Directions pure copper weathervanes have been unsurpassed in style, quality, and durability perfect for the house-proud homeowner. Bring The Joy of Outdoor Living to your home with this heirloom-quality piece.Product Details