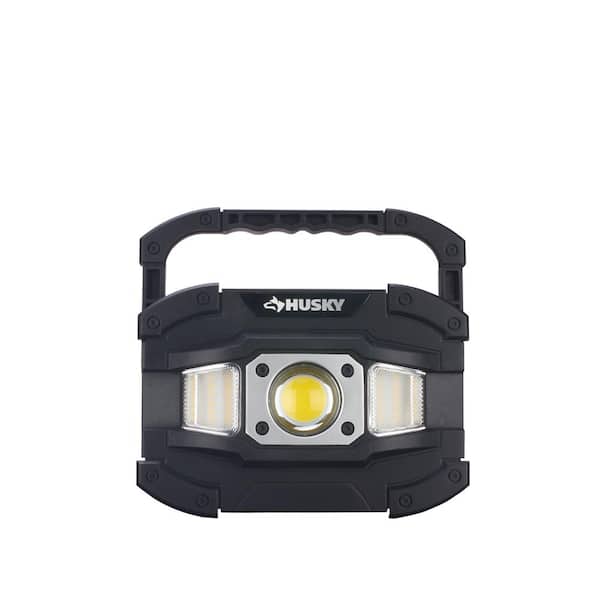 The Husky 500 Lumens Tough Stainless SteelThe Husky 500 Lumens Tough Stainless Steel Core LED Flashlight is equipped with a durable polyresin exterior for long life. This flashlight is also waterproof up to 1 meter and drop proof up to 9 meters, it is virtually unbreakable. The powerful brightness of its LED technology is able to provide the light needed in any situation. It features 4-light beam settings, including flood and strobe, which are ideal in emergency situations. You'll find it perfect for searching in the attic or basement or outdoors camping, fishing, or hiking.View Full Product Description

Have a flashlight for any situation withHave a flashlight for any situation with the 200 Lumen Swivel Base LED Flashlight by Stalwart. This work lamp features both a 36 LED bulb panel for lighting large areas and a single bulb focused beam for more precise lighting. The base has a powerful magnet to attach to the side of your car while changing a flat tire or for staying sturdy on a metal workbench. The shop light also features a hook for hanging under the hood of your truck or car during repair work, or for hanging from your tent during camping trips. The multipurpose electric torch provides 200 Lumens of light, making it perfect for roadside assistance and emergency situations such as power outages. This work lamp swivels to provide 180° of motion while using the magnet base or a full 360° while using the hook. Measuring 8.5 inches in length, this flashlight is sized just right for keeping in a workshop locker or drawer, glovebox or on a boat.View Full Product Description

The Coast G25 LED Flashlight features Coast'sThe Coast G25 LED Flashlight features Coast's Bulls-Eye Spot Beam. This reliable flashlight produces a broad flood beam that gives you the most useful light beam for most indoor and short distance applications. Its 3 high-intensity LEDs deliver 350 Lumens of light output, allowing you to see clearly in even the darkest corners of your home or workshop. A lightweight aluminum casing offers great durability and will hold up to heavy daily use.View Full Product Description