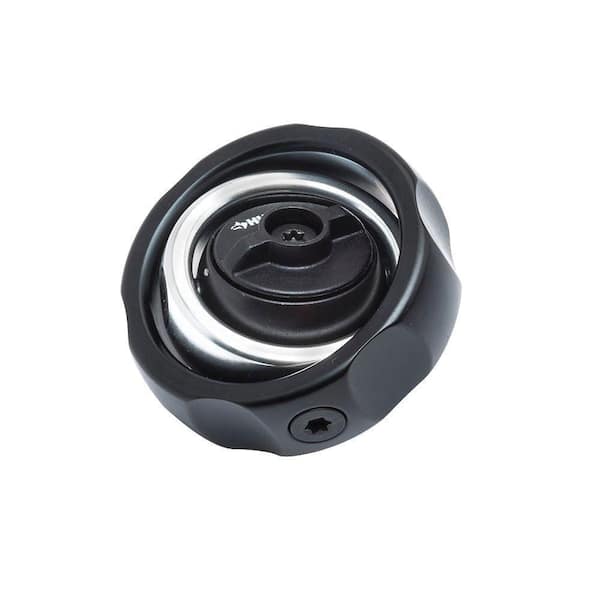 Manufacturer Warranty
Lifetime Warranty with no questions, no receipt required

Can the gimbal part lock in position

NO. But I don't see where that would matter much.

What is the function of the recessed star-drive screw on the side of the knob?

It's the swivel axis for the gimbal action.

Why can’t I find any black husky sockets in this drive?

YOU'LL HAVE TO ASK A HOME DEPOT ASSOCIATE THAT QUESTION.

How long is it

Why is the grey toothed object attached to the ratchet . Is it a feature of the rachet , or a toss away attachment ?

It's throw away packaging.

Where is this made?

Like most products, it is made in China. Don't believe the hype that China products are of the same quality as one other person said. One just needs to look at the difference between USA Craftsman and China made Craftsman. ALL these Chinese made products have a shorter lifespan. Look at the older Dewalt and Milwaukee products that works for decades. You wont find that with the new "same quality" china crap they want you to believe.

15
Filter by:
Showing 1-10 of 117 reviews
Mar 6, 2020
Interesting but not as wildly useful as I expected
I picked this up more as a curiosity than with a particular purpose in mind. I found it useful for spinning the lug bolts off after cracking them with a breaker bar, and for putting them back on to hand tight. I'm on my third one as they keep breaking, no longer ratcheting. It usually breaks after the first real use of the tool. I have determined that to correct the issue, I simply need to remove the cover cap and yank the ratcheting block off the cylinder splines. I have no idea how it glues itself to them, but it took a decent force to pull it off. Once it was loose and the tool reassembled (make sure that peg in the cover cap sits back inside the wire loop), it ratchets again just fine. I guess I'll have to wait until I use it for real again to see if it's going to seize every time it is loaded. One thing I wish the tool had was a center position where it didn't ratchet in either direction. Kind of like the 3-position ratcheting screwdrivers. Sometimes you just need to wiggle a screw/bolt/nut back and forth a bit, and that's annoying with this tool. When it's working. Yeah, sometimes I like it working, sometimes I like it broken. Maybe I need to have two. Not a must have but is useful, has its operational compromises, demands a bit more love than a ratchet should require. It is $20, but it is only $20. If you need what it is, I recommend it since I don't know what else I would recommend instead. I gave it three stars, stocking stuffer.
by ScottM
2 people found this helpful
Mar 14, 2018
Great ratchet
Purchased the 1/2” and 3/8” version along with the Husky 200 piece socket set (item H200MSS). Love the 100 position ratchets for tight spaces and they are all I use now. These ratchets (including the black 1/4”) along with the 200 piece socket set from husky make a perfect set, with no filler, for under $300.
by Dpoof13
3 people found this helpful
Oct 13, 2016
Good concept, poor material/manufacturing choices
Great tool concept and very useful for tight places. Issue comes with the internal mechanics of the ratcheting system. The ratchet component itself is made out of sintered powder metal, which degrades faster than a casting or milled piece. Milled would be too expensive obviously, but increasing the teeth size/decreasing count would have allowed for a more rigorous mechanism. The grooved ring that the ratchet component slides across has a coating that breaks off into the grooves/grease and causes seizing when the tool is not in use. Overall the mechanism is clever, relatively simple, and effective. Unfortunately this product was crippled by the manufacturing selections made that did not take into account the necessary tolerances and quality/performance of the materials for this design.
by CommentForTheDesigners
12 people found this helpful
Sep 8, 2016
Nice tool
I have no argument against this tool. The low profile head might allow getting into those tight spots where a standard size ratchet might not fit. With a 3.6 degree click along with nice long handle, torque should no longer be a concern. The handle is exceptionally comfortable as it has a design made for firm torque, but might cause a concern with greasy hands. I like the socket button lock/release. Positive action in anything that moves on this tool. The mechanics within the head are accessible for maintenance, if needed. I highly recommend this tool.
by Keith

Jul 23, 2016
Nicely Constructed
I was looking to upgrade my ½” ratchet to one that could advance the ratchet pawl in smaller increments. This is sometimes very useful when confronted with tight quarters where it is nearly impossible to engage a fastener with your socket unless you are able to rotate it just a few degrees. From that perspective, this ratchet does an admirable job. This is especially helpful when the ratchet handle is longer than normal (as it is here), making it even more challenging to swing the handle in close quarters. Of course, the extra length provides better leverage too. Although the product appears to be well-constructed of heavy duty metal components, I wish the handle had been designed to be more slip-resistant. For example, a cross-hatch etching on the handle would help shed oil/liquids from the surface of the handle making it easier to grip. The quick-release button is a thoughtful design feature, and worked well to help me easily release stubbornly seated sockets. Indeed it is a longer handle than a standard ratchet, but I don’t understand the “low-profile head” labeling because it seemed to be about the same depth as my standard ratchet (see picture). This is a nice tool to complement your ½” socket set.
by JAY

1 person found this helpful
Jan 7, 2016
Great for tight spots
This is a great tool for tight spots, and when direct tool access may not be available. The gimbal ratchet makes it easy to align to bolt patterns when direct sight is not available, either. The tool is large enough to be manageable, not being too big or too small. It is not too large to make it clunky or difficult to navigate those tight spots. The tool feels well build and durable for years of use. The gimbal ring is just the perfect size. The drive is 3/8", which is great for me because my socket sets are all 3/8" drive, and it is an extremely common size to locate. The direction selector on the top of the tool is easy to actuate with one hand as well. It is only a small hand tool without a leverage device, so getting a lot of torque with this is difficult, however attempting to get a large amount of torque with this tool is an inappropriate use of it as well. Overall, a nice tool to have around, and a lifesaver those couple of times when it is absolutely needed. Ive tried turning just a socket by hand in a tight spot, and I am glad that I have this now!
by SGMillerDesigns

1 person found this helpful
Dec 22, 2015
Great tool box addition the Palm held Gimbal ratchet!
Perfect tool when you have an odd location to reach while it also multiplies your wrist strength. Husky 100-Position 3/8 in. Drive Gimbal Palm Ratchet is a good addition to your tool box in every drive size that you use. The Husky Gimbal Ratchet is not just your ordinary palm ratchet; its innovative design provides multidirectional rotation for easier access in hard to reach areas. The 100-tooth internal ratcheting mechanism allows the Gimbal Ratchet to engage fasteners with as little as a 3.6⁰ rotation. The Husky Gimbal Ratchet is the perfect tool for high speed and low torque applications even in the most confined areas. 3/8 in. drive 100-tooth gear needs only 3.6⁰ rotations Dual-metal construction is lightweight and durable Fits in the palm of your hand Product is able to withstand wear, pressure or damage Dependable in achievement
by Salosenior

1 person found this helpful
Nov 20, 2015
Invaluable tool where its needed
Husky 3/8 in. Drive 100-Position Gimbal Ratchet seemed a little gimmicky, but the gimbal action does make it useful in more tight situations. The value is really when you have the tool on the nut and the gimbal allows you to get more comfortable to apply maximum force. It allows you also to tilt it to fit in tighter places. For me it felt like I was turning a really stubborn valve handle. There is enough force to get at small sized nuts not completely frozen and beats trying to get another tool or ratchet into position. The torque force is obviously low as you are using mostly your palm and fingers to twist without much of a mechanical advantage, but in certain specific impossible situations its a great idea. I tried it out on my car engine easily getting it into small areas to attach to nuts and was able to loosen several with no problem. One did cause a problem so that's why I wrote about its limitations. The tool has a good feel, the clicks are positive, the gimbal action is smooth in transition and the collar completely turns around and over the tool. Its something I want in my toolbox, its inexpensive and for those circumstances will save a lot of aggravation. I like it and quickly realized its not a gimmick at all.
by FXP1