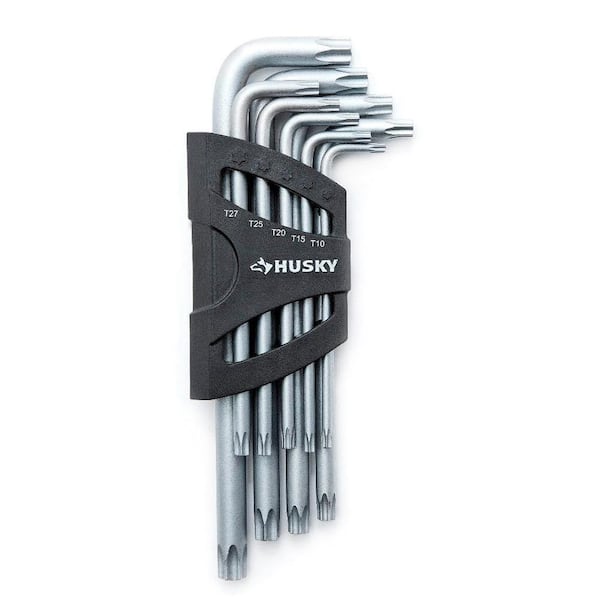 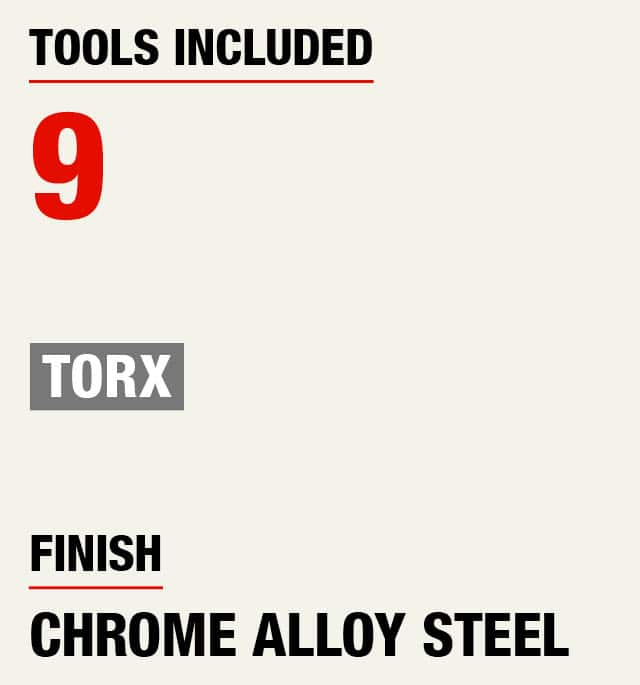 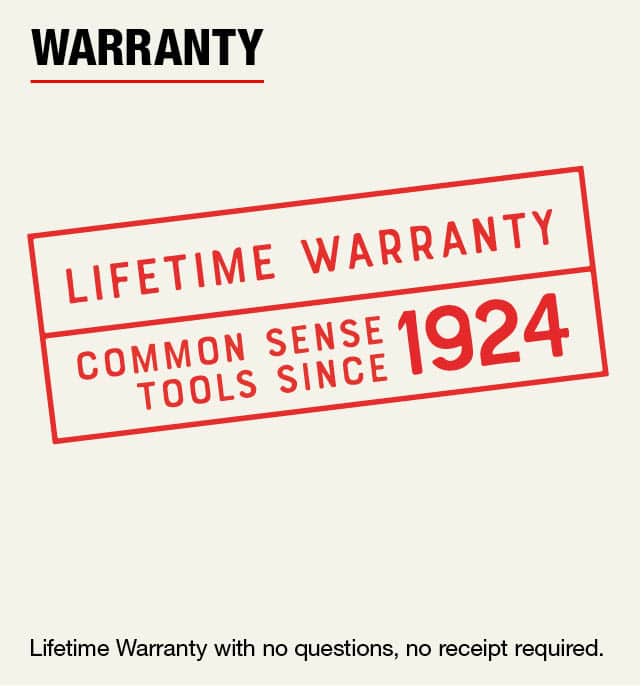 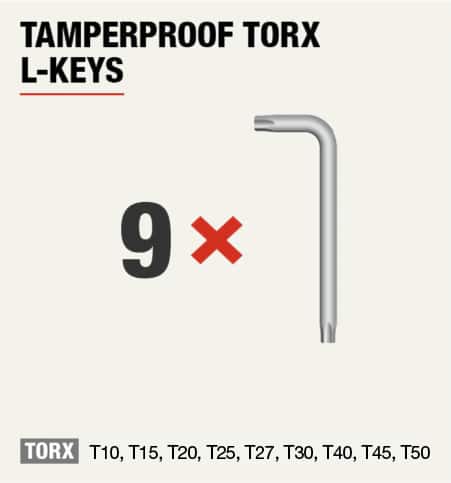 28
Filter by:
Showing 1-10 of 293 reviews
May 22, 2018
These work great. The magnetism comes in handy. The teeth are strong. It’s a good set of tools!
These work great. The magnetism comes in handy. The teeth are strong. It’s a good set of tools!
by
Feb 24, 2017
Torx Keys with A Magnetic Personality
A nicely made ( in China) set of nine (9) Torx keys, supplied with a compact plastic holder which holds the keys securely, takes up little space in a tool box, and allows ready access to the desired size. Sizes T-10,-15,-25,-27,-30, -40, -45 and -50 sizes are included. Either the short or long leg of each key can be used for conventional Torx fasteners (non-security) and the short legs have a hollow recess to allow use on "secure" Torx fasteners which has a central post. The long leg of each wrench has a small (but strong) magnet, to permit picking up of ferrous metal fasteners. Unfortunately, this precludes use of the "long" leg for security fasteners. The keys have a corrosion resistant coating which appears to be durable, but will possibly wear at the "business" ends of the tools with use. This set provides a convenient way to carry a fairly complete set of Torx keys, without taking up a lot of space or having them loose in your tool box. The plastic holder appears rugged enough to last a long time. The tools have a "guaranteed forever" guaranty....not sure if that covers the plastic holder also. The only negative here is only being able to use the short legs for security fasteners.
by
4 found this review helpful
Feb 16, 2017
Pretty good set
If you need a handy set of Torx keys then this is a pretty decent set to pick up. Like other people, I have Torx bits from several driver sets lying around and it's always a pain trying to find them and then locating the right one i need. This set has all the common size bits you need and works really well for what it is. The magnetic side (only on the long arm) is a nice feature for me since I always seem to be using really tiny screws for whatever reason. Having them held in place is just a nice, convenient thing to have. Really like having the "case" to hold all the bits in one place; no more fumbling around for bits anymore. I'd say for the average DIY-er, this set should be just fine for pretty much any task you have. I think someone a little more handy might need something a little more rugged or a set with more bits included. Personally, I prefer T handle sets but this works out just fine for me in a pinch. Overall, can't really say anything bad about this. Works great, is convenient and (as with all Husky products), this carries a lifetime warranty.
by
1 found this review helpful
Feb 1, 2017
Typical keys, but strong metal!
I can't say there is anything special about these keys, other than that the ends are magnetic, which allows for better pickup of small fasteners which tend to fall into your engine bay, get lost, and ruin your whole project (as half your day was spent finding the missing bolt). Tamper-proof they are, but keep in mind that these keys have magnets on the long ends, which means only the short head is tamper proof, if you don't mind that. The metal however seems to be very strong and backed by a limited lifetime warranty. The ends are supposed to be "chamfered" as advertised, but they don't seem like they are to me. Too much metal on the tips of these keys without proper chamfer can cause a whole chunk to break off the tip, rendering the key useless, but then again, these are simple hand keys and are not impact-rated bits, so they'll do just fine.
by
1 found this review helpful
Jan 2, 2017
Weak Magnets, Long Arms not Tamper Proof
I needed a set of Torx keys to fit down in power tool connector wells, since I couldn't use the set of hex Torx bits with a bit holder, since it was too wide. These keys do the job well, although I'm a little disappointed that Husky went with magnetized ends in the long arms rather than the tamper proof ends. There are 9 keys in the set, with included bit holder. You get T10, T15, T20, T25, T27, T30, T40, T45, and T50. The short arms all have a hole for use with tamper-proof fasteners, and the long arms have a magnet embedded in the end, presumably for picking up fasteners. They're in there a little sloppy though, and some of the ones in the keys I got were set crooked and protruding from the end of the bit. The larger keys have big enough magnets that are actually effective, but the smaller ones are too weak to be much good. I would much rather have the tamper proof Torx driver on both ends. I am glad that Husky went with S2 steel, which is harder but more brittle than chrome vanadium or other normal tool steels. The only real step up would have been chrome moly. Plus, even if any of them do shatter because they are more brittle, Husky offers a lifetime warranty on their hand tools. Just bring the broken one into your local HD, and walk out with a new one. Overall, these are a decent set of Torx keys, they're just not much to write home about. They felt a little sloppily assembled with how the weak magnets were set in the ends, but the lifetime warranty offers some redemption.
by
1 found this review helpful
Jun 8, 2022
by
Jun 8, 2022
Return this product because two of the torxs I used...
Return this product because two of the torxs I used snapped
by
Jun 1, 2022
by
May 25, 2022
by
May 25, 2022
The drill is easy to handle....
The drill is easy to handle.
by
Showing 1-10 of 293 reviews

Built for strength and durability, the HuskyBuilt for strength and durability, the Husky 18-Piece SAE Metric Non-Slip Hex Key Set is designed to make your jobs easier. The non-slip factor on the tip groves help grip the rounded corners on hex fasteners. To activate, apply pressure while turning the key to grip into the corners of the damaged fasteners.View Full Product Description