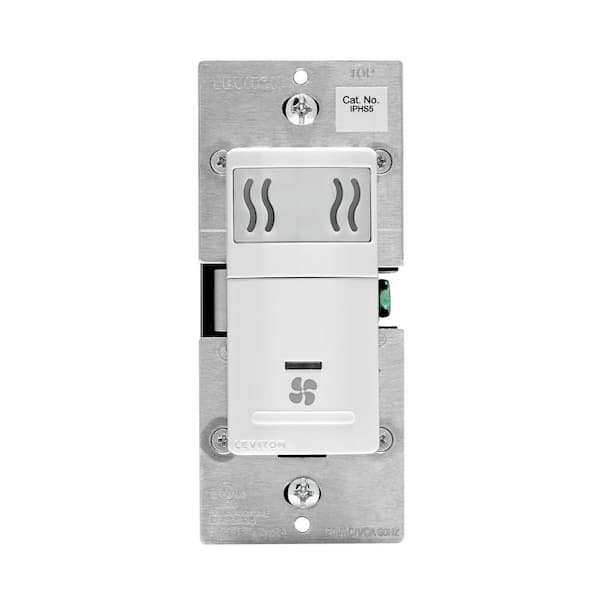 The new Leviton Humidity Sensor and Fan Control automatically detect excess humidity in a room and activate the ventilation fan to reduce condensation. This helps to lessen the appearance of mold and mildew and provides a more comfortable environment. The sensor uses a microprocessor combined with state-of-the-art digital sensing technology to continuously monitor and manage humidity levels in areas of the home prone to condensation and mildew. It features user-friendly controls to adjust sensitivity, humidity level and time out settings. The sensor can replace a single pole switch and can be used with most bathroom or ventilation fans or fan/light combinations. It is designed to fit within a standard wall box and requires a neutral wire for operation.

34
Filter by:
Showing 1-10 of 215 reviews
Apr 24, 2022
Works Perfectly as Advertised
Installation was a breeze works exactly as advertised. Remember to adjust the timing and sensitivity settings to your situation.
by

10 found this review helpful
Feb 25, 2017
5 AMP HUMIDITY SENSOR FAN SPEED CONTROL, WHITE
I was looking forward & delighted to have it for my hall bathroom rather than to turn fan switch before & after my showers. My hall bathroom really needed automatically venting @ any time there was humidity. i had a handyman to install it for me but not accomplished it to get working. he retried 3 times, still not working. maybe defected? I was sooooo disappointed. I really wanted to have it automatically turning itself @ any time instead of to turn switch on. boo hoo
by
Response from levitonProductExpertMar 9, 2017
Leviton sincerely regrets your experience. We would like to know more about your specific installation and the problem you encountered. Please email to
Ebusiness@leviton.com your phone number and best times to call and we will have a technical support specialist call you to offer assistance.

David Keller
Leviton
Senior Director, e-Business
1 found this review helpful
Jan 24, 2017
It does work, but it takes a while to get the settings right so that it doesn't turn on in the mi...
It does work, but it takes a while to get the settings right so that it doesn't turn on in the middle of the night when the house is being cooled and so it does turn on after taking a shower. Also, had to install it sideways since my bathroom light and fan switches are all in a 4-gang electrical box installed vertically.
by
3 found this review helpful
Nov 14, 2016
Great fan control
This is the third Humidity sensor I have installed in the last month. It just makes sense for a bathroom fan to come on automatically. It's hard to get everyone in your household to turn the fan on when they have taken a bath or shower. This eliminates trying to get everyone on board to run it on. There are several settings that you can adjust on the unit. Like how long it runs, how much humidity it needs to sense before it turns I actually decided to use the preset factory settings. It is working just fine for me at their settings. I also like the feature that when someone stinks up the bathroom they can just touch the sensor and it will run for 10 min. or whatever you have it preset for. Wish my Home Depot carried these in the store, but I did have to order them online in order to get them. Shipping was really quick though, 2 days.
by
7 found this review helpful
Oct 29, 2016
Steam remover
Now I don't have to remember to go turn off the bathroom fan iafter a shower (or remember to turn it on for that matter). I was always forgetting to turn off the fan in the bathroom after my morning shower. 8 hours later when I get home from work, it was still doing its job. When I found out I could get a fan sensor and timer my mind was blown. The install is a little time consuming because most bathroom fan switches don't require a neutral wire connection, so you typically have to re-wire the switch box a bit. This is so the sensor always has power and can monitor the humidity level for changes. It's also deep, so you will spend some time squishing wires around. Once installed it's great. You have a manual override, which is also timed so if you leave it running it will turn off after your preprogrammed configuration. I set mine between 10 and 20 minute marks, it can go for up to 60. You can also adjust or turn off the humidistat if you like. And it also comes with the ability to turn on-off at specific intervals if you have a room that needs constant ventilation like an attic. As for usage; I have not had any false positives yet. The default setting for the humidistat seems to be a good option. Why did I give it only 4 stars; it has 3 design choices that bug me. First you have to remove the faceplate and then gently pry the plastic switch button off the front to make adjustments. Sure you shouldn't have to make changes often but this is goofy and I don't want to break the plastic ears holding the switch plate to the front. The LED on the front, not everyone wants a light switch to glow. The push button is flimsy and gets caught on the switch faceplate cover from time to time, I'm not sure why I can disconnect it from the switch either, seems like another piece that can be broken with use. All in all I am glad to have it and it indeed insures I don't have moisture in my bathroom.
by
5 found this review helpful
Aug 22, 2016
Perfect addition to a bathroom with a humidity issue
Perfect addition to a bathroom with a humidity issue. This is a great way to eliminate moldy damp bathrooms. Before showering, I push the fan button and let it run. When I come back later, the fan has automatically turned off and the bathroom is dry. Installation was super easy. The provided instructions are well written and easy to follow with an understanding of basic electrical. It fits perfectly in a decora plate and blends in well Perfect for people who have to run out of the house as soon as they finish showering !
by
Showing 1-10 of 215 reviews

The Leviton Decora wall switch occupancyThe Leviton Decora wall switch occupancy sensor is the ideal energy-saving choice to provide automatic (auto on/off and manual on/auto off) lighting control in a variety of commercial and residential applications, including offices, conference rooms, multimedia rooms, child-care centers, and more. The ODS10 is the perfect solution for controlling a wide variety of load types. It features a low-profile digital design and vandal-resistant PIR lens. It does not require a neutral connection, and it installs in place of a single-pole wall switch to fit in a standard wall box.View Full Product Description

Levitons OSSMT multi-technology Decora styleLevitons OSSMT multi-technology Decora style wall switch occupancy sensor is used to provide automatic lighting control for energy savings and convenience in a variety of commercial applications, including: retrofit- private and executive offices- conference rooms- storage areas- restrooms- classrooms- lounges- training areas. The OSSMT provides for automatic switching of incandescent lamps, low-voltage lighting with electronic and magnetic transformers and electronic and magnetic fluorescent ballasts. The OSSMT features a manual override switch that can be used to keep lights off while an area is occupied, which may be desired in conference rooms, classrooms and other areas during video presentations. Designed to replace a single-pole Decora wall switch, it fits in a standard wall box.View Full Product Description

Coordinating Claro Wall plate and AccessoriesCoordinating Claro Wall plate and Accessories sold separately. Let Lutron's Maestro Occupancy Sensor switch turn the lights or fan on and off for you. It's a simple, easy and low cost way to save energy and add automation to your home. Install a Maestro Sensor and lights/fan turn on when you enter the room and then turn off automatically after you leave. This sensor features XCT Sensing Technology which detects minor motion, such as typing at a desk or reading, ensuring sensor does not turn off inadvertently. Equipped with ambient light detection, you can customize your sensor to detect daylight so lights don't turn on with enough natural light in your room. Keeping the sleek design of the Maestro family, Lutron sensors will match the decor of any room in your home. Install a sensor in your bedroom so lights aren't left on mistakenly or in the bathroom for your exhaust fan. This Maestro Sensor works with any bulb type, including CFLs and LEDs or fans up to 3 Amp. This switch can also be easily programmed to function as a vacancy (manual-on) sensor.View Full Product Description