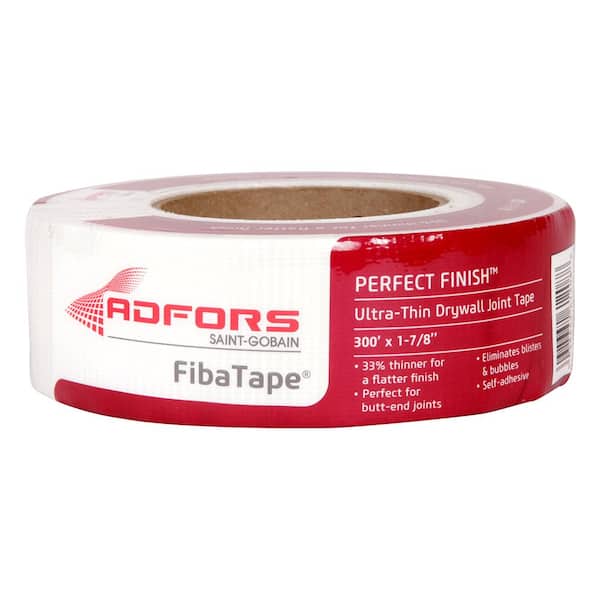 Perfect Finish is an ultra-thin, self-adhesive, fiberglass drywall tape ideal for both professionals and do-it-yourselfers. It features a thinner profile, and increased strength providing a smooth, seamless finish.

Selected specific search for fire resistant drywall tape. This is one of six that populated on Ho...

Check the label. it should provide the information. if it does not ++ get a different tape

No you do not, the tape has adhesive that should stick to your surface. However if the tape doesn't stick you can put down a thin skim coat to help the tape adheir to the surface your working on.

can you use this on durock

how many sheets of drywall will one roll do

Depends on your waste and your experience

The image shows a bare hand, but it's a fiberglass mesh. Do I need gloves or not?

I have paneling in my closet. I am planning to paint over. Will this work well on wood paneling...

Can this be used on other materials? Like sound board for instance.

I want to know what is the difference between the tape for seetrock and tape of fiber for chirroc which is the best.

Its a personal choice

does this work well for inside and outside corners?

I would only use this on inside corners. Outside corners need to be more durable so I would use metal corner bead.

Mar 30, 2015
Easy Enough to Use
Easy enough to use - no un-threading at the edges when pulling off a length, sticks when you put it on and stays there enough until you get some mud on - feels thin - I don't recall having to go over it multiple times to hide it. I had a small patch job - from pulling out a closet - rather than putting up sheets of dry wall.
by parttimehack

3 people found this helpful
Jan 15, 2015
Applies easily, very thin and can be repositioned
I have never before attempted to repair anything larger than a 1" hole in wallboard so I am by no means experienced in this particular DIY project. My project was to repair two sections of sheetrock that had been cut out of the master closet wall by the former owner of my house. The two sections, each measuring 12x18", had been removed to access plumbing pipes for the master shower. The prior owner set the pieces back in place in the wall but then used masking tape to hold them in place in case the problem with the pipes recurred. Nothing has happened since we've owned the house, so I decided to permanently repair the sheetrock and then repaint the closet wall. I researched various products and decided on this Perfect Finish mesh drywall tape because it is self-adhesive and very thin. Very thin is a plus in one regard, because it's easier to cover up the tape edges with drywall compound, but I realized after using the tape on the first section that the thinness didn't hide the cut lines well enough for my taste, so on the second section I applied a double layer of tape. I already had Dap DryDex Spackling in my tool box , so rather than purchase drywall joint compound, I decided to use the spackling. Since I've never used joint compound, I don't know how much easier it would have made my task, but the spackling worked. The plastic wrapping on the roll of tape contained only four small drawings as instructions on how to use the product, along with a company web address for further information. I went to the website and found not only a larger set of drawings with printed instructions (which were easy to read and understand) but the company had also posted a 2 minute video showing someone using the mesh drywall tape and demonstrating the technique for using drywall compound. The advice in the video was very helpful. The tape comes in a 300 ft roll and since I only used about 10 feet, I have an enormous amount left over. In hindsight, for this size DIY project, I should have gotten the smaller roll. I think I will be able to repair small wallboard issues for the next 25 years using this one roll. When I opened the package of tape, I was completely unable to find the end of the tape. I used a box cutter to cut across the tape, started it there and hoped to find the end in the process of unrolling what I'd cut. Unfortunately that didn't work, so I had to again run my fingernail around the roll numerous time and finally I found the start of the tape. As I pulled the tape off the roll, some strings separated at the tape edge and it took 3 turns around the roll before that stopped. Not a big deal, just a bit annoying. It would be nice if the manufacturer place a small bit of something under the tape end so that starting the roll would be a quick process instead of a frustrating one. The tape adheres very easily to wallboard, and if for some reason you didn't apply it quite in the position you wanted the first time, you can lift it off and reposition. Once I had all four sides of my piece of wallboard taped, using a 2" wide spackle tool, I spread a thin layer of DryDex spackling all over the tape, being sure to press it through the weave of the tape and feathering out the edges. Once it dried, I lightly sanded off the rough spots and then applied a second coat of spackling, this time using broader margins around the tape so that when I paint, any bumps from the line where the wallboard was cut will be less noticeable. The edges of the tape are not at all noticeable under my two coats of spackle, but the spackle was applied thicker on the tape in order to adequately cover up the wallboard cuts, so the spackle on the tape is taking much longer to dry (already into hour three and probably still has another two to go before it's completely dry). I haven't yet painted my wall, but based on how it looks after the second coat of spackle, I don't think the repair work will be noticed, unless you know it's there. Success!
by sweetpoki

Crack-Tape repairs difficult cracks on flatCrack-Tape repairs difficult cracks on flat surfaces and corners. Ten times stronger than paper tape, the tape repairs stress cracks and cracks due to truss uplifts. Crack-Tape cuts easily with a utility knife or scissors, but also resists blisters, tears, shrinkage, and wrinkles. Manufactured from Strait-Flex's patented composite material, it can be used for finishing drywall in high humidity applications. To apply measure and cut to length, then fold in half for corners. Apply all-purpose compound to surface or corner. Press Crack-Tape into the wet compound, adjust to create a straight line, and wipe down with a taping knife. A second coat can be applied immediately. Let dry. Apply a light skim coat, let dry, and sand.See Full Product Description

QEP Backer Board Seam Tape Roll joins backerQEP Backer Board Seam Tape Roll joins backer boards before applying thin sets or adhesives. This tape may be used for seaming most types of cement backer board. Reinforced with fiberglass mesh, this roll is strong enough to be used in most general installations. Reduce taping time with this self-adhering roll.See Full Product Description