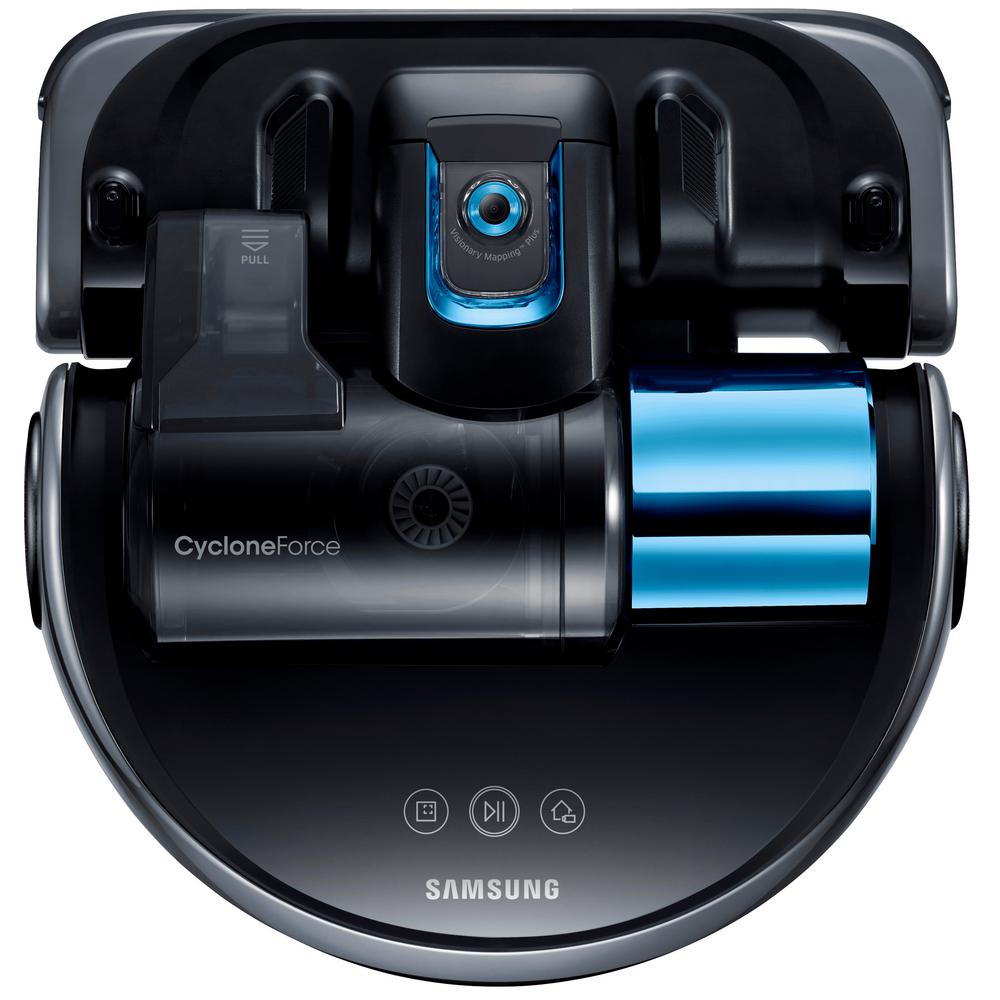 Save time and effort by letting the Samsung POWERbot WiFi Vacuum handle the vacuuming for you. Powerful, long-lasting suction delivers optimal cleaning, while smart technology allows you to control your POWERbot from your smartphone. This innovative design maximizes cleaning coverage as it navigates your home with ease and avoids obstacles.

What is the max height of a transition the vacuum will roll over?

Hi, Windqwest, The maximum height of a threshold the POWERbot can climb is about 0.6 inches (1.5 cm). ^Rosi

How does it handle going from hardwood to a fringed throw rug?

If I have to purchase this item online and not in store to discuss with an employee, is there a warranty available?

Thank you for your recent inquiry with The Home Depot, Adrian. You may add an extended warranty by checking the "Let's Protect This" box underneath the product's pricing. We appreciate your business and look forward to serving you in the future. Thank you for shopping Home Depot.

I sent an email many days ago with photos of the large floor rug. Dark contrasting flower designs on beige background causes the Powerbot to stop and back up. It eventually turns around and misses the rest (most) of the large rug. Is there a sensor that can be adjusted? Also might make it roll over edges of small but thicker rugs (0.5") easier. So I have to force it with manual SPOT mode but it still hangs up on the flowers unless I make it approach the flowers from a different angle. Otherwise very excellent heuristics and good coverage on most of the floor. We have mostly tile except for a number of small rugs and a large area floor rug. See attached pictures.
Pros: effective across the house
Cons: over sensitive to contrasting floor designs
Was this helpful?
0
0
MamaDawg
Portland OR
Great bot and great service
March 6, 2020
Features :
5
Value :
5
Customer review from samsung.com

ive had this for 4 years. when it had problems the tech folks were great and its home again running every day [This review was collected as part of a promotion.]
Was this helpful?
0
0
MamaDawg
Portland, OR
It's a great machine
March 4, 2020
Features :
5
Value :
5
Customer review from samsung.com

i love my powerbot-it doesn't get stuck under furniture and has a larger catch bin than other brands. it gets the kitty fur from my 2 cats and is efficient [This review was collected as part of a promotion.]
Was this helpful?
0
0
LabLuv
Miami, FL, USA
Good Bot
January 17, 2018
Features :
5
Value :
5
Customer review from samsung.com

We are really satisfied with this little bot. We call him Alfred cause he is kind of like our butler. We have him on WiFi, so we can get him going even when we aren't home, or we can schedule him. I was eager to test him out since we had a Roomba several years ago which couldn't even finish a room without running out of battery charge. Neither was it very thorough, it would make random passes in the one room never really going over the entire floor. The Samsung on the other hand works just as it shows in the infomercial and videos. It goes wall to wall, back and forth, only deviating from that pattern if furniture is in the way. When furniture is in the way, it does a tight circle around the base or legs and continues on course. I have stood and watched it work its way through a tight maze of furniture in our living room. It managed to clean every available inch of open flr that had a telescope, end table, sofa and media table. I was expecting it to get stuck or push something. NOT ONCE! .it moved back and forth, did circles and covered every inch that did not have a leg on it. Then moved on without any navigational issue. Alfred does the entire house and returns home to his charging station in our guest bedroom. We got him cause we had just gotten our yellow lab and that's a breed that sheds a lot. Alfred cleans that up without any trouble. The canister seems like the perfect size for our 1800 sqft home, though we do have to empty it each time he finishes...which is a small price to pay for a clean flr . My only issue has been that it builds a lot of static. So it tends to have dog hair clinging to it. Oh and that our very affectionate Lab likes to lick the camera that scans the ceiling for the room floor plan. Which means I have to use that very soft cloth to clean sunglasses with to clean the streaks that are left on the camera lens so Alfred can see clearly again. Worth the price if you want your floors to be cleaned every day, without having to break a sweat.
Pros: strong motor, works as advertised
Was this helpful?
0
0
jsb2b
PowerBot 9040
January 8, 2018
Features :
4
Value :
4
Customer review from samsung.com

Has good suction. Cleans well but you have to watch it as it can get stuck or trapped. We call it our drunk monkey. I thought it had room mapping but that option did not show on the Samsung app. After much research, I found, in a Samsung user forum, that Samsung replied to this issue as "No. This feature is not available on the 9040".
Pros: suction power
Cons: no room mapping, gets confused with trey and cathedral ceilings
Was this helpful?
0
0
MRayBob
Plano, TX, USA
Vacuum that is a Robot, not the other way around...
December 3, 2017
Features :
4
Value :
5
Customer review from samsung.com

After being a faithful user of another brand for the past 10 years or so, I've found this product to be far superior due to it operating like a real vacuum. This thing really sucks up dirt, dust, dog hair, tiny sharp plastic pieces (that I can't call by name, but you know them by stepping on them and screaming). With the other product, it seemed to get stuck in corners, leave zig-zag patterns in the rugs and carpets, and never find the charging station before the battery went dead. This one will shut the vacuum motor down so that it can conserve energy to get back to the home base and charge. The main reason I wouldn't give this 5 stars on design is because it doesn't get under some of the places the other unit did due to the height of the suction canister. The app also needs help... it has a really nice UI, however it crashes all the time.
Pros: Durable, powerful suction, easy to clean, smarter than most, wi-fi to turn on/off
Cons: big and tall, app crashes
Was this helpful?
0
0
THEREALGreyghost
Minnesota
Jetsons are for real
September 17, 2017
Features :
5
Value :
4
Customer review from samsung.com

This little vacuum is Awesome. It has performed flawlessly everyday. I have it vacuum daily while I am at work. Works exactly as advertised. I use it with smarthings and Amazon Echo. AMAZING!
Was this helpful?
0
0
Flash3
Michigan
It's a Real Vacuum!
January 31, 2017
Features :
4
Value :
4
Customer review from samsung.com

This is our second robot vacuum. The first was "Rosie" and she worked pretty well though it was pretty much "touch up" rather than an actual suck-it-up vacuum. But now we have had "Sammy" for a month, and he's the real deal. Whereas Rosie wondered about bumping into things and randomly sweeping as she went, Sammy tries to cover the ground in a back-and-forth pattern, and compared to Rosie, he gathers up considerably more "stuff" along the way. (Not that we're really dirty, mind you.) He tries not to bump into things, and he really jumps on the brakes to keep from going over the stairs, where Rosie sometimes went just a touch too far and turned off to keep from tumbling down. So why's he down a star? Well, he's not perfect. While he works around legged chairs and tables pretty well, it seems to throw him off his plan. As a result, sometimes his back-forth pattern isn't quite parallel to the wall and he might miss a section. We had to buy some little stands to raise the bed so he could get under it without getting stuck. And I'm not sure he would work at night because he works by camera among other things, though I haven't tried putting him on third shift so I can't really say. He does find his way home even though it's very much more tucked away than what the manual suggests. We have noticed that when he decides he's had enough and goes home, after he recharges a few hours, he appears to start up by himself to go finish the job. That's a little startling. For rooms on other floors, we just carry him in and set him off for a while and then go retrieve him. We also have him do the "mud room" entry which we have been having to use a shop vac to clean, but while it takes him some time, Sammy keeps at it until he gets the job done just as well. We've had him on trial, but now that's up and we decided he's found a home. And we think he's a welcome addition to the family.
Pros: powerful
Cons: lacks "sentries" to limit areas
Was this helpful?
0
0
Review this Product
Share your thoughts with other customers