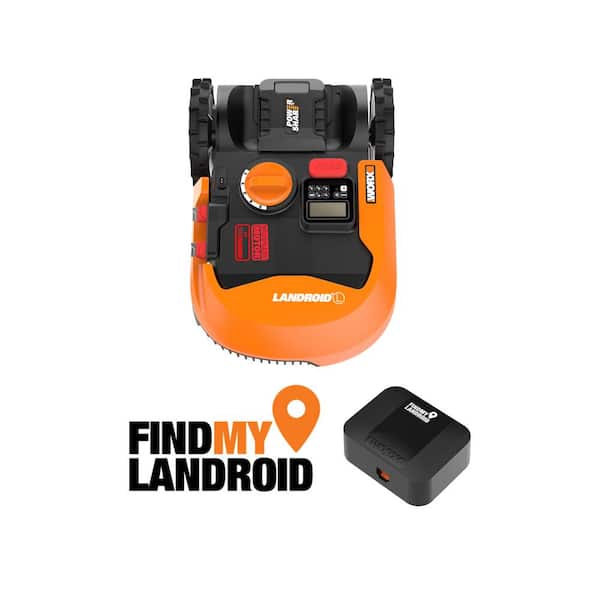 Take the hard work out of yard work. Landroid is easy to install in just a few simple steps. Once you set up the charging base and lay down the perimeter wire, its ready to mow. Landroid is so smart, it builds an algorithm based on your yards specifications. Then, it programs itself with the most efficient mowing schedule for your lawn size. Landroid lives outside, rain or shine. If the weather gets too harsh, it heads back to the charging station to wait out the storm. It keeps your yard perfectly manicured throughout the year, with offset blades that mow close to your lawns border. The razor-like blades cut just a little bit at a time, naturally fertilizing your lawn with the grass clippings left behind. No need to stay home to keep an eye on your mower you can delegate your lawn duties from anywhere. Just download the Landroid app to monitor and control it remotely. The app also lets you adjust Landroids mowing schedule, calculate your lawn size and receive important alerts and software updates.

What happens if my back yard is fenced in. Do i have to leave the gate open or is there a mechani...

The Landroid must have a gate or a path to move through the second cutting area. The Landroid can travel over a driveway to get to the secondary mowing area if needed, but the wires must be run through 2 separate expansion joints in the concrete.

No,the WR150 and WR153 are still available. Please contact our Solution Center Team at 866-354-9679(WORX) Monday through Friday from 9 am until 6 pm EST and on Saturday from 9 am until 4 pm EST. We'd be more than happy to assist you. Thank you for choosing WORX!

What happens when very large dog waste doesn’t get picked up before Landroid’s schedule? Does it avoid it, get stuck or succeed but need a bath?

Hello, that is a great question! It may get messy. We recommend cleaning up after your pets, but if by chance the Landroid does encounter some it handles it just like any push mower will. Thank you for choosing WORX!

What happens if I need more then 1145FT of wire?

We don't recommend going over that limit as it may cause problems for the Landroid in receiving a signal from the wire causing possible wire missing errors at random spots on the lawn. depending on the configuration of your lawn, you may be able to go slightly above that limit, but it will be better if you stay below.

Can the perimeter wire be buried and if so how deep?

Yes. You can bury the perimeter wire up to 2 inches under. further than that will cause problems with the sensors.

I have an acre of land with a double wide and garage on it. Will I need to split up the land and ...

It may depend on how accessible the other side of the Lawn is. If you have expansion joints on the driveway, you can run the wire through them and have the mower go from one side to the other. If you are not able to do that, you can set two mowing zones, add a charging base to each and move the Landroid from one to the other.

can GPS be used instead of perimeter wire?

No, The GPS module will not be involved in the navigation of the Landroid. You would still need to install the wire. The GPS unit will allow you to locate the Landroid if it is stolen, as well as give you a way to connect the app to the Landroid with out the need of wi-fi.

The cutting pattern is random. It can't be programmed to cut in straight lines.

How many hours does it take to mow 1/2 acre? Assume the collision detector is installed and there...

Thank you for your question, for a 1/2 acre, we recommend you program the Landroid to work about 4 to 5 hours each day for a weekly schedule of 5 days.

Can I split my 1.5 acre yard into 3 sections and use the landroid with it?

Thank you for your question. The Landroid will be able to work on each of the sections. however you would have to increase the amount of time the Landroid works on each section so that you can take care of everything and not let the grass over grow in the sections it is not mowing. To get the best results, we recommend the Landroid concentrating in 1 1/2 an acre area.

2
Filter by:
Showing 1-10 of 23 reviews
Aug 20, 2020
Firmware Update!
Initially, the Landroid L would worm its way out of the boundary wire everyday, and would subsequently get stuck. This always happened on a slope. A call to customer service revealed it was a known issue that should be solved with a firmware update. The update came in mid-August, 2020, and solved the issue. Now, the Landroid L performs beautifully. I have St. Augustine grass, which gets fertilized as required, and it grows fast! I setup the Landroid to cut everyday from 11am 'til 8pm instead of on Auto. Now, it keeps up with the fast growing grass. Programming is easy. The battery will last about 1 1/2 hours before the Landroid returns for a recharge. Then, out of the garage it goes to continue cutting the grass.
by Tom
1 person found this helpful
Aug 12, 2020
Great but Needs alot of tweaking on a slope
I have had this for a few days and am still tweaking the wire. The lawn looks excellent. I have just under a half acre and about a third of that is on a slope. I have a few comments. The phone app looks really amazing but it crashes after about 2 minutes and you need to delete it and then reinstall. I ended up using my ipad which was stable, but lacks some of the phone features that would make it great. On a slope the robo overshoots the edge and in my case ends up in the brush or in an edging ditch (see photo). On a small incline I leave about 14 inches (wire to edge) on the main slope it's about 20 inches. Basically the front wheels get stuck and it can't backup. On the upside of the slope there is no issue. It's seems to be a great timesaver, and fingers crossed the app will stabilize and I'll have my wire distance sorted out soon. On a mostly flat lawn this would be a no brainer.
by MikeinCalgary

Customer review from worx.com
Jun 24, 2020
It took about two weeks but now I got him...
It took about two weeks but now I got him working. If you have a little bit of a slope make sure you keep it off the slope as it will side down. Also, roots are an issue for sure, had to get some topsoil to cover them. Overall I am very happy with it now but you will need to do some work to get it to work in a normal yard with trees and bushes.
by Martin
1 person found this helpful
Jun 13, 2020
Working as Promised!
I have my Landroid mowing a 450' x 20' strip at the front of my house (corner lot). It has 2 types of grass and is anything but smooth. It is maintaining it all week long with a fresh mowed look. Great Product. Envy of the neighborhood.
by AllenD1960
Response from Customer ExperienceFeb 26, 2021
Thank you for taking the time to share your experience and review! We are excited to hear you are enjoying the Landroid plus garage! Thank you for choosing WORX. You are greatly appreciated!

Customer review from worx.com
May 24, 2021
Terrible Performance
I have had the WR140 for exactly a year. It is a far inferior product to the previous version WG794 which still have and it works several Hours per day, rain or shine. This new device is just full of issues IMO. Main one having to to with its ability to be able to turn. It is constantly stuck. 20 times a day if mowing on the highest setting. Just not worth the money. The service has been completely unreachable as well. So, definitely go elsewhere for your Father’s Day!
by Kgibson

Customer review from worx.com
May 19, 2021
Get Your Weekends Back
[This review was collected as part of a promotion.] This is one solution for those pesky lawn chores. The GPS is not perfect but does work in case of theft or if the device has left the area you specify (sends mobile continuous mobile alerts). Accessories may be required to "perfect" your mower experience, but it is worth every cent.
by tjp8

Customer review from worx.com
Apr 28, 2021
Never mow your lawn again!
[This review was collected as part of a promotion.] I'm two weeks in to a robot mowing my lawn and would recommend it to anyone that's "hands on" when it comes to yard maintance. I like to edge the beds to keep it neat.
by Rob Gleason
Response from Customer Experience Apr 28, 2021
Thank you for taking the time to share your experience and review! We greatly appreciate your honest feedback. For Landroid related service and questions please call 1-800-727-6260.

Customer review from worx.com
Apr 1, 2021
Manual stinks. As I figure out how to run it,...
Manual stinks. As I figure out how to run it, it cuts grass nice
by Sue
Feb 24, 2021
The Future
I'm lazy. But I enjoy a big lawn and love the outdoors. It's like this little buddy was made for me. I'm in love. It does all the hard work while I sip on my Long Island iced tea on a sunny Sunday afternoon. Easy setup, cuts the grass and great runtime. What more can I ask for? Actually, if it could pick up the clippings after itself, that'd be great.
by DeLorean
Response from Customer ExperienceFeb 24, 2021
Thank you for taking the time to share your experience and review! We are excited to hear you are enjoying the Landroid! Thank you for choosing WORX. You are greatly appreciated!