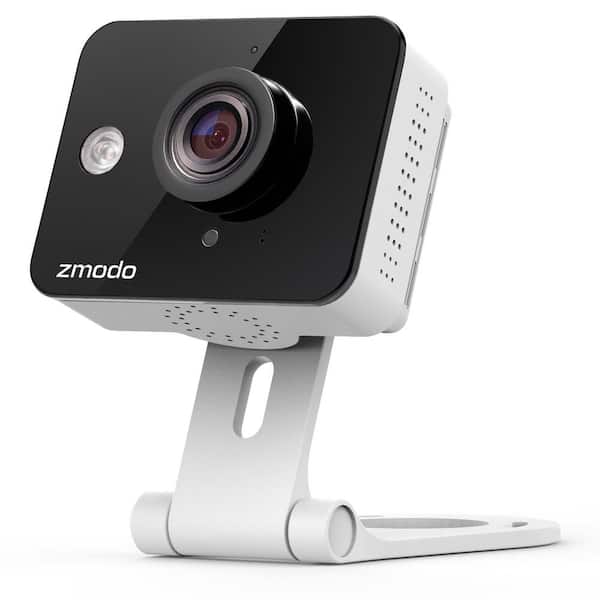 The Zmodo Mini Wi-Fi Camera offers you an easy way to check in on home while you're away. With motion detection alerts, on demand remote viewing, 2-way audio, and night vision, the Mini Wi-Fi Camera is the easy and simple way to protect your home.

Will this record outside if I have it inside

Yes, this can record outside.

do these record for a period of time?

Can you set it up to record on your computer?

Does this work with 5ghz wifi?

If your 500 miles away can you see with just basic TWC internet, and TMobile phone with unlimited

We go to our son's travel baseball games every other weekend, about 150 mi. away from home and we have tmobile unlimited data; connects just fine. We were able to see all that we wanted to see while away from home. Good picture too. We bought two one for inside and one for outside. HIghly recommend.

Can multiple cameras be used in a home? I'm looking to setup 3 or 4 cameras and wonder if anyone ...

Yes, we have two and there is the option to add more

Is the field view only 10 degrees?

Can it be used outside?

Not designed to be out in the weather. Probably would work fine for a while if you protected it from rain. Likely wouldn’t last as long.

Once I install camera and put in my wifi password. It starts automatically. I have several comput...

Hello, You can log in with your account on: user.zmodo.com/user/login Hope that answers your question. Best, Zmodo customer service

Can nightvision be turn off?

Hello, Sure you can turn off the night vision. Just adjust the night vision setting in the App. Thanks a lot! Feel free to contact us if you have any questions! Best, Zmodo Customer service

Security monitoring doesn't have to be complicated.Security monitoring doesn't have to be complicated. This 1080p HD indoor Wi-Fi monitoring camera from Lorex is an easy solution perfect for monitoring doorways, windows, hallways, or high value items. It is also well-suited to monitor pets while you are away or for a nursery while your child sleeps at night. This camera features a pan-tilt feature that allows you to remotely adjust it's field of view up and down or left and right straight from your phone. You can also easily cover the lens to ensure your privacy. Featuring 1080p HD resolution, 2-way audio, infrared night vision, and person detection technology, this indoor camera will provide you peace-of-mind no matter where life takes you.See Full Product Description