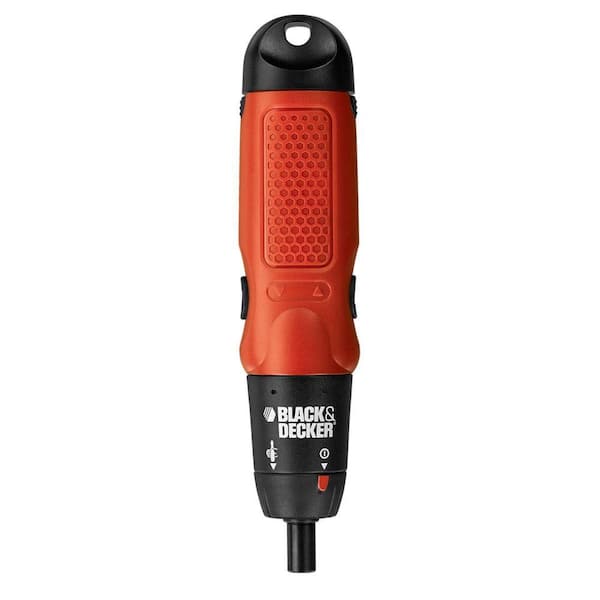 The BLACK+DECKER 6-Volt Alkaline Battery Cordless Screwdriver is great for those quick fixes around the house. It features an automatic spindle lock for greater control when starting and finishing screws or for manual use, if desired. There's a forward/reverse switch and a narrow nosepiece for extra help in tight places. A rubber grip provides comfort and control.

The WEN 3.6-Volt Lithium-Ion Cordless ScrewdriverThe WEN 3.6-Volt Lithium-Ion Cordless Screwdriver with Bits and Belt Holster provides compact and portable power helpful to any homeowner. The quick release 1/4 in. chuck rests flush against the top of the driver to allow access to tight corners and awkward spaces. This drivers unique design makes it the perfect companion for putting together furniture and accessing hard to reach screws. Drive screws and fasteners at a rate of 180 rotations per minute with up to 31 in lbs of torque. The battery's lithium-ion cells create a fade-free power supply for hours of steady and consistent operation. An onboard battery meter informs users when their power supply is running low and in need of a charge. Two LED lights at the front of the drill illuminate your workpiece during operation. The lightweight design weighs in at a mere 12 oz. while the soft rubber-backed handle features ergonomic contours that fit perfectly into the palm of your hand. This package includes a convenient carrying holster with bit storage, two flat head bits, one phillips head bit, and a charger. And, because its a WEN product, your screwdriver comes backed by a nationwide network of skilled service technicians, a friendly customer help line and a two year warranty all to make sure you remember WEN.View Full Product Description

The WEN 3.6-Volt Lithium Ion ScrewdriverThe WEN 3.6-Volt Lithium Ion Screwdriver is a cleverly designed screwdriver that delivers 30 in./lbs. of torque in a compact frame. This unit features 21 clutch settings and drill mode for added fastening control. The small size of this screwdriver makes it convenient to use for small household jobs or when you need to work in tight spaces. The 2 position handle allows you to quickly convert this screwdriver with a push of a button from a pistol grip to a straight grip. An LED light provides good visibility when working in dark areas and a soft grip handle allows for a comfortable secure grip. The 1/4 in. magnetic chuck makes it easy to change and hold bits in place. A built-in battery status indicator lets you know the capacity of your battery at all times. Includes charger, 2 bits and instruction manual.View Full Product Description

Remember when your screwdriver was a flashlight.Remember when your screwdriver was a flashlight. How about when your flashlight was also a screwdriver. Either way you look at it, I didn't get much sleep last night. The WEN 4V Max Lithium Ion Electric Screwdriver and Flashlight provides maximum versatility for all kinds of applications. The two-position handle swivels from a standard drill shape to a horizontal flashlight shape, helping you reach even the most difficult screws. The magnetic quick-change 1/4 in. hex chuck rotates both clockwise and counterclockwise at 180 RPM with 48.7 in. lbs. of torque. The handle mounted LED flashlight operates independently of the drill, providing a rechargeable light source in times of need. A second front-mounted LED work light operates simultaneously to the screwdriver, illuminating your workpiece during operation. The hard-shelled carrying case is also packed with accessories, including a wall charger, 8 sockets, 29 short specialty bits, 6 long standard screw bits, and a two in. magnetic bit extension for maximum reach capacity. And, because it's a WEN product, your 4V Max Lithium Ion Cordless Screwdriver comes backed by a 2-year warranty and a friendly customer help line. Remember when you could hang pictures, assemble furniture, repair electronics, and see in the dark all with one tool. Remember WEN.View Full Product Description