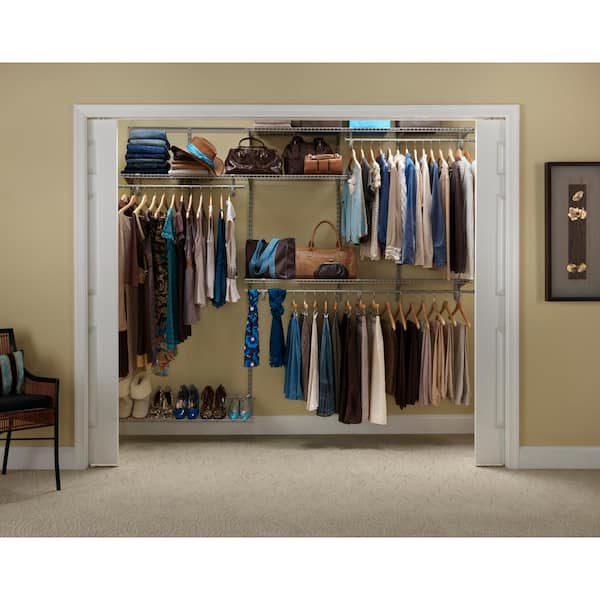 The ClosetMaid 5 to 8 ft. ShelfTrack Closet Organizer Kit offers configuration and shelf adjustability for a custom fit. When assembled, the closet organizer's total dimensions are 78 in. H x 96 in. W x 12 in. D. This closet solution offers you ease in sliding hangers since the hang rods are engineered to attach to the shelving. The durable metal wire shelves have a smooth, nickel finish.

Trinity's Expandable Closet Organizer isTrinity's Expandable Closet Organizer is easy to adjust, and is the perfect addition to any closet or living space. This expandable, free-standing closet system comes with adjustable hanging rods creating room to hang men's clothing, a variety of coats and/or dresses. The Closet Organizer comes with (2) adjustable hanging bars that expand from 27 in. - 51 in. to fit different closet widths ranging from 56 in. - 78 in. and (10) adjustable shelves with bamboo boards to help prevent creases and maximize storage space. Made with sturdy wire shelving, the Closet Organizer is available in our eco-friendly chrome color finish. With an easy, no tool assembly, you can set-up your new closet and start organizing in less than 30 minutes.See Full Product Description

Keep your bedroom organized with this ClosetMaidKeep your bedroom organized with this ClosetMaid 7 ft. to 10 ft. ShelfTrack Closet Organizer Kit. Constructed from durable steel, the shelves feature a smooth white finish. The system provides plenty of hanging space for your clothes and a variety of configurations for a custom fit. Its hang rods attach to the shelving for a continuous hanger slide.See Full Product Description