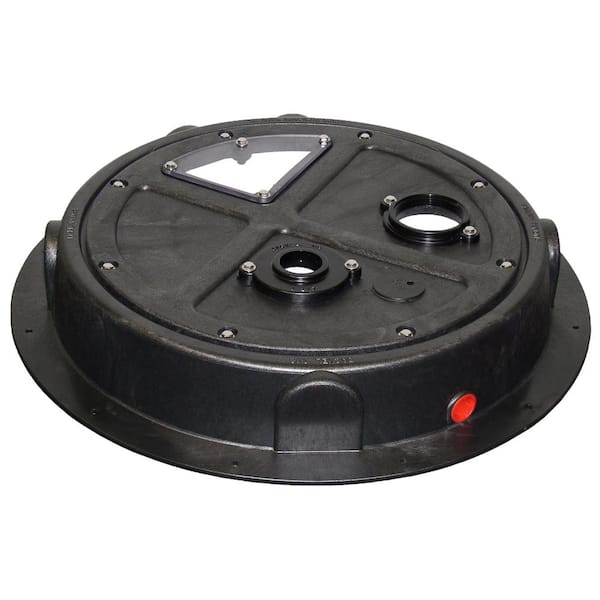 Manufacturer Warranty
Warranted to the original consumer purchaser to be free from defects in material and workmanship for a period of one-year from the date of purchase.

My sump pit is in an enclosure. Do I need to screw it into the concrete or just caulk with adhesive would work.

Hi Ed. We strongly recommend securing the riser to the concrete floor with tap con screws for safety. Our internal testing has demonstrated that sealing the cover to a concrete floor does provide a gas tight seal.

HOW DO I INSTALL THE COVER SEAL BETWEEN THE LID AND BASE WITHOUT IT FALLING INTO THE SUMP PIT DUR...

The larger hole in the picture is a 3inch opening for a radon exhaust fan. If you won't be using that feature, you could repurpose that hole for your 2nd 1.5in pipe. The kit comes with multiple adapter plates and covers that you could probably swap out the 3in threaded plate for something you could use.

Does this come with tap con or concrete screws, if not what should I use and how many?

Will this help lower radon if its kept sealed and without installing a radon fan?

It's best to use a fan but the sealed cover will help lower Radon emissions just as sealing all cracks in the floor and around the walls.

So, I have a sump pump and back up sump pump already installed and would like to replace the sump...

Yes. I installed mine in a similar way. Since I was replacing the pump itself, I used brand new pipes. Nevertheless, I still needed to use coupling fittings to attach the pipes to the existing plumbing. The pipes and the sump pump wire have to run through their respective holes in the lid before it is permanently attached to the floor.

i have ceramic tile on the basement floor and i really don't want to burn out my drill and severa...

Hello dchandyman. Thanks for the question. Many folks have had success using caulk to adhere the bottom ring to the floor without anchors.

Once sealed are you able to remove and reuse cover to get access to sump pit or to replace sump pump?

You can, you just need to plan ahead for your install. On my drain pipe, I have a 45 elbow just above the lid that I left unglued and installed a rubber coupler a few feet higher so I can remove that section and allow the lid to be completely removed if needed. Pipes you don't plan on moving could be routed through the sides of the ring and caulked in place.

This cover looks identical to the Jackel smr16101-cv and the images do show the brand name Jackel...

Hi Joe. The Everbilt Radon Mitigation Basin Cover is proudly made for The Home Depot by Jackel at our Mishawaka, Indiana factory.

How does one know what sump this will fit and lock onto?

This should fit any sump but I don't think it "locks" on. The water pipe and Radon Pipe come out of the top.

2
Filter by:
Showing 1-10 of 134 reviews
Mar 9, 2021
GREAT PRODUCT
After doing a 3 month text last year that resulted in a score of 5.9, it was time to do something. First thing was to buy a meter, this was the second. The meter showed 6.0 when it was placed in the basement. The install of the cover was fairly easy for a do-it-yourselfer. 25 years of gunk in the pit was the worst part of the project. After that its just a matter of lining up the pump with the cover and piping. Drew a few lines on the floor replaced the cover drilled one hole into the floor placed a nail in it, then drilled another on the other side and pinned it. This way the cover doesn't move while I drilled the others. Next remove the cover clean off the dust, 2 tubes of caulk just inside the holes. Replace the pump run the lines threw the cover set the cover and screw it down. What amazed me was the amount of draft that comes through that pit. I just vented the pit outside as a passive system no fan. The meter I purchased does a daily weekly and a 6 month readout. Since the install the reading on the meter have fallen from 6.0 to 2.24 for the last 2 months. The daily reading have gone from 0.48 to 2.65.
by MattF
Response from JackelMar 10, 2021
Hello MattF. Thank you for the 5 Star Review and kind words. We are thrilled that you found such success with this product!

Oct 22, 2019
The cover on my basement sewage pit has never been securely attached and sealed since I bought th...
The cover on my basement sewage pit has never been securely attached and sealed since I bought the house 5 years ago. It sat pretty snugly over the cast iron pit so it was never my highest priority as it seemed to keep all the odors out of the basement even though the bolts had been snapped off, probably due them rusting out then shearing when some maintenance was done to the pump. So when the ejector pump's float switch started sticking and I had to do battle in the pit anyway I went looking for a solution to the cover issue and found this product. As it luckily happened, the original cover was made by the same company, and despite being 25 years old all the pipes lined up exactly with the holes in the new cover. Sometimes you win one. Installation was relatively easy. The instructions are pretty much useless, having very little detail. But that being said, if you are a competent D.I.Y. type it's mostly just thinking it over and figuring it out. They supply a slew of different parts and adapters, so you can almost certainly McGuyver it up with the supplied goods. A few hints might be helpful for you if you're planning on installing one of these things. 1) Loosely attach the cover to the base then dry fit it all together over the pit so that the cover will fit on the base with all the holes lined up. Once it all lines up on the money attach the base to the floor with Tapcon screws and silicon. 2) I saw a number of reviews where people had a hard time attaching the cover to the base, both lining up the gasket and getting the cover screws into the base without knocking out the retaining nuts into the pit. One good tip in the instructions is to put the screws into the cover holes, then putting the gasket on the screws. Then you just carefully place the cover on the base while paying close attention to lining up the bolts. Use a nut driver to slowly and carefully make sure the nuts and bolts line up, taking care to not cross thread them. Get all of them started, then tighten them down in a star pattern like you were changing a tire. Mine all went in with no problem. 3) There's an extra 1" or so hole in the side of the base that I didn't see mentioned in the instructions. I didn't need it for whatever it's for, so I just took a used gift card and silicon-ed it to the inside of the cover, then used a fender washer and a stainless screw to pull it tight. Worked great. So overall I'm very happy with the product and result. I's buy it again.
by Ran
Response from JackelOct 22, 2019
Hello Ranman. Thank you very much for this excellent and very well worded review. We really appreciate the time you took to write this. We are taking your constructive criticism to heart and will update the installation instructions as you suggested. Once again thank you!