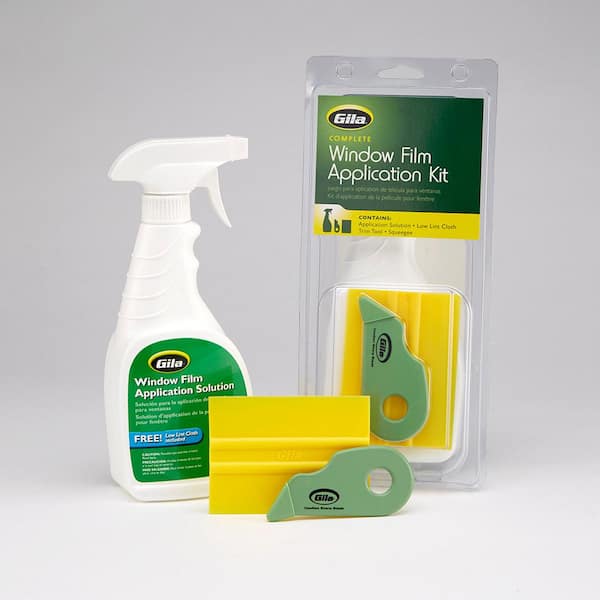 DIY projects should be satisfying, not frustrating. Our Complete Window Film Application Kit contains the items to help with exactly that: a generously sized bottle of application solution, a plastic hard card squeegee to smooth bubbles, a low-lint cloth to whisk away debris without leaving more behind, and a trimming tool made for safety and accuracy.

Manufacturer Warranty
SATISFACTION GUARANTEE: If at any time you are dissatisfied with your purchase, CPFilms will gladly replace defective product. For product information, call 1-800-528-4481.

Instructions please.. I am 87 and want to do it right.. Thank you

It's pretty easy and the film can be removed and start again if anything goes wrong. First, cut the film to size. Tape one corner in place about 1/8" or less from each of the two edges. Mark and cut the other two sides the same distance form the edge, either with the supplied cutter or some good scissors. Remove the tape and clean the window very well and wipe with a lint free cloth. Wet the window well with the spray included in the kit. Remove the backing from the film and place it at the top of the window, centered. Use the squeegee to remove any air bubbles, and work your way down. If the window is too dry, spray with come more of the included spray. If you have any bubbles between the film and the window, be sure to work those to either side or the bottom before continuing. If anything goes wrong, you can lift the film away from the window and start again - just be sure to not get the window side dirty. I had never done this before and was surprised at how easy it was - so much easier than the self-adhesive type of film.

Under Info & Guides, there is a link to Installation Instructions and a link to Measurement Guide...

Bought the products installed with lots of difficulty. Once dried...all the film fell down...tried again with same results! Very disappointed and waste of money

What is in the application liquid

Yes, I bought the kit two years ago. I haven’t had one problem. It’s still in place and looking good.

Do I have to use the special solution to put the paper up on the window or can I use water?

I doubt that plain water will work, I found my special solution and it said not to mix with water so my guess is the straight water would not work.

How do you remove the sticky stuff left behind from window film?

There was no sticky stuff left in window

When does it dry ?

Does this Harm glass

NO-Not at all. There are no adhesive effects left on glass or mirrored surfaces if removed.

Once film is removed can it be reinstalled

Can this product be used on the outside of the window and hold up to elements? Or must it be used...

I used it inside