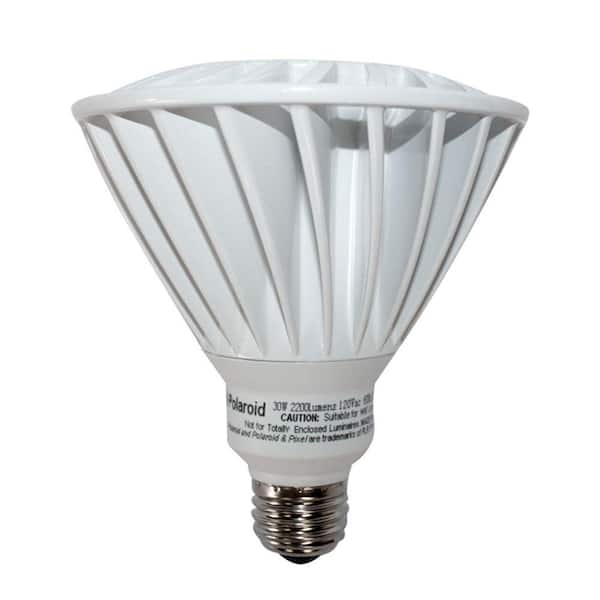 The Polaroid 2200 Lumen Cool White LED Flood Light Bulb uses only 30 watts of energy and lasts for 40,000 hours. This LED light bulb is mercury-free and lead-free, making it environmentally friendly while providing a safer and healthier surrounding for you and your family. The PAR38 medium-base LED lamp can be used in outdoor areas for optimal security lighting or where bright light is a must. It illuminates instantly, remains cool to the touch even after hours of use and is dimmable for customizable lighting.

the greater number of lumens, the brighter the bulb, but you also have to decide the color of the light, that is warm, cool or daylight. The Polaroid is bright and daylight color, but of the 5 I purchased 2 burned out way too quickly. HD gave me credit for one, the other they made me fight with the manufacturer and it has been over 6 weeks since I complained to Polaroid, even sent them photos, etc. Look for another brand!

4
Filter by:
Showing 1-10 of 12 reviews
Nov 20, 2014
Great Product - When It's Warm Outside!
So here's the deal. I purchased this back in late April. I live in Pennsylvania. All summer long this worked absolutely great. Never had an issue and the lumens output and beam pattern are great! However, as it started to get cold over the past two weeks the light has started to slowly strobe at night. This isn't the cool, party strobe effect, though. It's a slow strobe. I spoke with Home Depot's supplier on these and they stated this is a known issue. In short, if you live in a climate where temps do not drop below 50 degrees F, this is the light for you! It rocks! However, if you're anywhere else expect this light not to function properly in cold weather. Because of the lack of cold weather functionality it gets an overall rating of 2 starts. (Photo is of a CREE brand LED that Home Depot Offers as well as this Polaroid LED. I have done a comparison video on YouTube)
by PAFirefighter

5 people found this helpful
Feb 12, 2017
I bought 7 of these for my office and two have burned out in about a year. I no longer have the ...
I bought 7 of these for my office and two have burned out in about a year. I no longer have the receipt. Junk.
by Jim
Jul 31, 2016
A great light, when it works!
I purchased 5 of these from Home Depot via the internet. It took a little longer than expected to receive them, but that was not the problem. I put 4 of them into use and within a couple of months the first bulb died. I returned it to my local store and received credit for it. Luckily I had an extra one that I ordered, so it wasn't that much of an inconvenience. After about of year of use, another bulb died. This time the local store said that I would have to go to the manufacturer and they gave me a contact. I reached out to the manufacturer's rep and it took several weeks until I received a reply. They wanted the receipt and photos of the bulb in lace. Then I waited another 2 weeks and was told that they would send a replacement. Two weeks later I called and was told "there are none in the warehouse," I was told that as soon as there were any, I would receive one. It is now over a month since that information, still no replacement. I will never buy another Polaroid product, and suggest you stay clear of this bulb. It is a shame, because it is a great, bright, right color temperature for good use in areas needing such, but not at that price and lack of dependability.
by toxdoc
Nov 29, 2015
super bright white light
These flood light are awesome. I have replaced all of my old yellow dull lights with these and now my half acre back yard is lit up like a baseball field at night. Have no problems with them not starting up fast like some have reported and they have been going strong for over a year now. Highly recommend if you want bright white light. Just wish they were a little less expensive.
by Gidget

1 person found this helpful
Feb 24, 2015
Great bulb, but strobes when very cold
Bought two of these in April 2014 (10 months ago). They are wonderful and bright. Like others have noted, I do have some strobing issues, but only with one bulb and only when it is very cold. If the temperature is above 7-10 degrees when I turn on the lights, everything is fine, even if it goes below zero overnight. However, on very cold days when the temp is below 7-10 when I first turn on the lights, one of the bulbs strobes slowly. Based on others saying they have issues at 50 degrees or other non truly frigid temps, perhaps I'm lucky. Bottom line, one bulb is great, the other is great 99% of the time.
by EC121

Feb 13, 2015
Cannot recommend this bulb due to it failing in the cold weather
I really wanted to like these bulbs and initially (1st month) liked the brightness and the potential cost savings. However in the first months that the cold weather started this bulb failed and started the strobing problems others have mentioned here and on Amazon. Then to make it worse I tried reaching out to the customer since Oct/Nov by email, twitter and other methods and no response at all ! Due to that I cannot recommend this bulb and will be looking for a better product from another manufacturer
by Wildcatz
Jan 20, 2015
bright LED bulb
I ordered 5 of these bulbs. Initially they were all that I could have expected, very bright and wonderful. I did not find a competitive product available with that number of lumens and daylight color. Within 3 weeks, though one bulb stopped working. I returned it and got credit. For that price I would not expect this to happen. Now I am worried that the others might stop also. So far so good.
by toxdoc

2 people found this helpful
Jan 19, 2015
Bright and work great
I ordered four of these two months ago before reading the reviews. Stupid I know, but it worked out well as the stories about the strobe effect would have kept me from ordering. When the new bulbs arrived, I only opened one and put it in the freezer for two days. I plugged it in and it worked perfectly. I then installed all 4 on our house. I've checked them quite a few nights with temperatures in the teens and have seen NO problem whatsoever. Maybe there was just a bad batch? These are noticeably brighter than my other brand of LED bulbs although the beam is a bit narrower.
by CountryLiving

Dec 7, 2014
120W EQUIVALENT COOL WHITE (4100K) PAR38 DIMMABLE INDOOR/OUTDOOR LED FLOOD LIGHT BULB
This light is very bright and it works well for a driveway lamp. Only one problem, after only a day of service the lamp began to act like a strobe lamp. This happened intermittently so it had to be replaced.
by HomeDepotCustomer

1 person found this helpful
Nov 20, 2014
Polaroid Par 38 LED PLPAR38W (Strobe Effect in Cold Weather)
This was a decent light for us until the end of summer, once the middle of fall hit and temps dropped, the light started doing this strobing effect. If you're thinking about buying this one and live near the equator you should be fine, but if you're anywhere that temps drop at night during winter, I cannot recommend this bulb even though everything else about it was outstanding. Watch the video and imagine going through an entire season where the strobe light comes on when you flick the switch. No thanks. The world of LED lighting has come a LONG way -- before this issue I liked the light output a ton better than older halogen bulb, and it was costing me less than a penny a day to run. Still, just wanted to give you guys a heads up. Please let me know if you have better recommendations for exterior lighting that has already been tested and works in colder weather.
by Headleygranger
7 people found this helpful
Showing 1-10 of 12 reviews